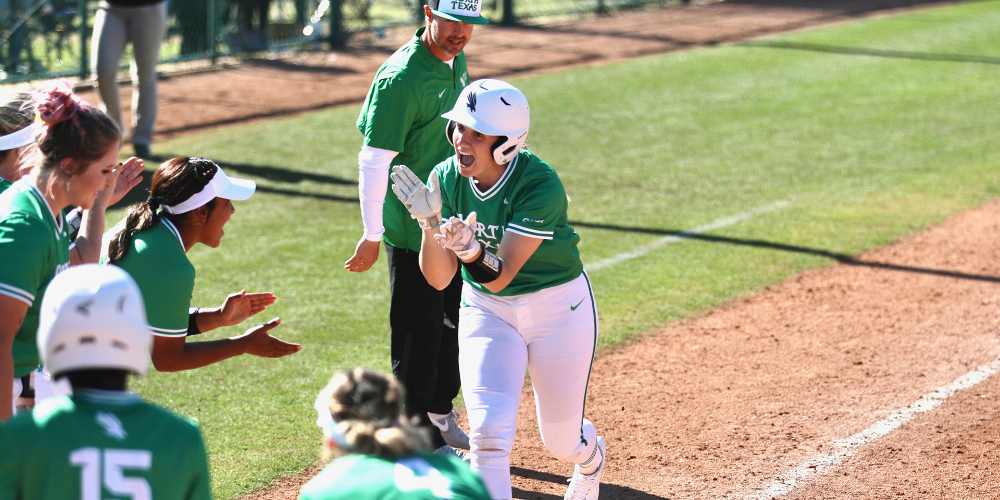 University of North Texas head coach Rodney DeLong is not averse to using a sugary treat to spark some extra fire in his team. If the Mean Green sweep a weekend of games on the road, they are treated to ice cream before the bus ride home.

The players were handed $8 at the Marble Slab Creamery on Saturday after completing their second straight unbeaten weekend with a pair of wins at the Islander Invitational in Corpus Christi, Texas.

“Sometimes you have to find a way to motivate any way you can,” DeLong said. “That is all I talked about Saturday and they came out and performed well. They deserved it.”

The Mean Green are hoping to indulge many more times this season. They are off to a 12-2 start, which includes a 3-2 extra-inning loss to No. 3 Texas last week.

UNT heads to the Oklahoma Tournament this weekend, which includes games against Northwestern and Oklahoma.

“We are about to hit a tough stretch, and it’s something we have tried to prepare them for mentally,” DeLong said. “It’s the reason I created this schedule around our conference schedule. I think if we stay healthy and continue to work, I think you could see this team get into regionals and be really tough to beat and put a lot of pressure on somebody.”

In his second season at UNT, DeLong set a high bar right away. He led UNT to a program-record 35 wins and the first Conference USA regular-season title in program history last season.

This came only a year after DeLong engineered a major turnaround at Austin Peay, leading to Governors to a program-record 39 wins in 2018 and snapping a 24-year streak of losing seasons. The 22-win improvement was the largest in Division I that year.

Making the jump to UNT was an opportunity DeLong felt he couldn’t turn down. He knew the quality of softball in the state was high and the school was situated close to recruiting hotbeds in the Dallas and Houston areas.

“I felt good about the administration here and the location. I felt like it had the potential to be a great mid-major,” said DeLong, who got his start in softball coaching at the high school level in his home state of Oklahoma. “I kind of felt like it could be like what’s happened at (Louisiana) Lafayette and this place could become a really powerful mid-major.”

The UNT athletic department, led by athletic director Wren Baker, has been investing in the program’s facilities. The Mean Green are redoing the fences this month at Lovelace Stadium and new bullpens are being constructed.

They are building a 100 x 60 outdoor hitting facility with turf and LED lighting. Once the season ends, a new dugout and playing surface will be installed at the stadium.

The UNT players spent many hours at the current facilities during the fall working with the staff on every aspect of their games. The results have been showing through the first few weeks of play.

“I think we are a little tougher and grittier. We’ve had some close ball games that I think last year we lose,” DeLong said. “But because of our development over the offseason and how well we are throwing, our kids know how to win tight ballgames and we give ourselves a chance in every game.”

“She does a really good job with them,” he said. “She was under-recruited and under-sized when she went to McNeese State. She is a bulldog and she knows how to work and bring that mentality to our pitchers and gets the most out of them.”

The Mean Green have displayed a businesslike approach this season that initially raised some concern from the coaching staff.

“I used to worry that they were not really talkative in practice and sometimes you think they don’t care,” DeLong. “But when the lights are on and it’s time to prepare, they play hard and practice hard. They are just a solid, hard-nosed group.”

But when ice cream is offered as a postgame treat, they are just like little kids again.

Although he’s an old-fashioned sundae kind of guy, his players can be a bit more adventurous with their flavor selections.

He just needs to find the best spot on the bus route home and provide the per diem.