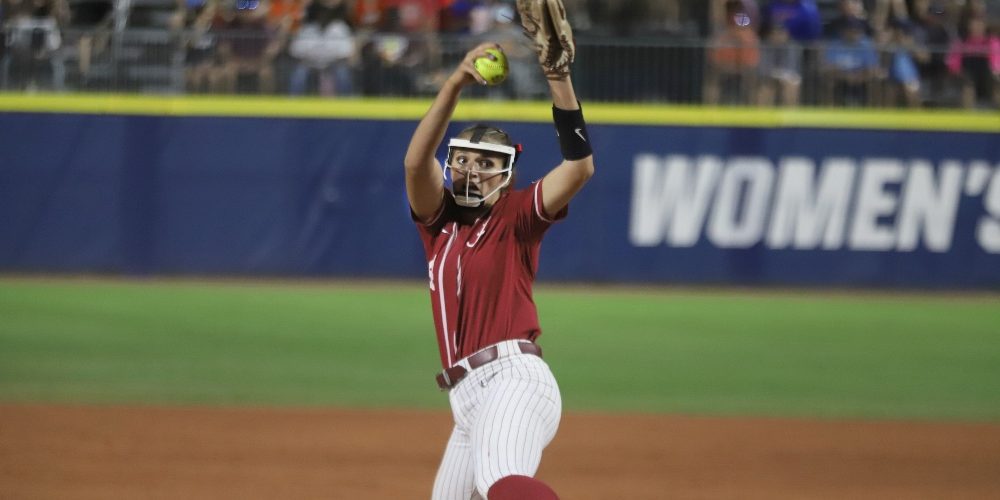 The East Carter High softball team had an early-morning state regional game on Saturday. The players needed to get their rest, but nobody could pull themselves away from their TVs.

Montana Fouts, the pride of Grayson, Ky. and an East Carter alum, was bidding for perfection on Friday night in the Women’s College World Series.

After Fouts secured her place in history on her 21st birthday by throwing a perfect game to beat No. 2 UCLA, households across the small northeastern Kentucky city exploded with cheers.

The East Carter players arrived at the field the following morning bleary-eyed, but still buzzing with excitement from watching Fouts continue her mastery on college softball’s biggest stage.

“Everyone is talking about Montana and everyone is so proud of what she’s doing,” said MaKaleigh McCarty, a 15-year-old sophomore at East Carter. “She’s just so inspiring to watch. It’s almost like you don’t think you can do it until you see somebody else doing it. It lights the fire even more to want to do it.”

Fouts has been a dominating force this season. The junior right-hander is 27-3 with a 1.43 ERA, 344 strikeouts and 46 walks in 210.2 innings pitched. She has 22 games with double-digit strikeouts, including nine straight and 16 against ranked teams.

With her 344 strikeouts, Fouts ranks fourth on the Alabama single-season list and is just 17 away from Jackie Traina’s 2012 record of 361.

Ask anyone around Grayson – population 3,976 – and they could have predicted what Fouts is doing. They saw it building as she developed into a three-time Gatorade Player of the Year, future SEC Co-Pitcher of the Year and All-American.

There is a roadside sign for drivers to see as they pass through the city touting Grayson as the “Home of Montana Fouts” and listing all of her major accolades.

There is a new large banner stretching across main street celebrating Fouts being named MVP of this year’s SEC Tournament.

No matter how much national publicity she gets, Fouts remains true to her roots. She’s still the humble Cowgirl-hat wearing Montana that’s been a mentor and role model for countless young girls in Grayson.

“They all love Montana. The stuff you’ve seen on TV about her, that don’t even magnify the type of person she is. She is better,” said Bo McCarty, MaKaleigh’s father. “The little kids come up to her all day long when she’s at a ballgame and she signs autographs for every one of them.”

Sarah Cordle has idolized Fouts since she began playing softball. The 14-year-old even dressed up like Fouts for Halloween two years ago.

The work ethic Fouts honed in Grayson has followed her to Alabama. After a so-so 2020 season by her standards, Fouts was determined to return even stronger for 2021.

“She is a no-days-off kind of person,” Alabama pitching coach Stephanie VanBrakle Prothro said. “You have to make her realize she does need some time, but she always wants to work on something. She always believes she can get better and that she can hit her spots better. She will outwork anybody.”

After Alabama played Texas A&M in the regular season, VanBrakle Prothro said she and Fouts had a “come to Jesus” meeting.

VanBrakle Prothro wanted to convince Fouts she couldn’t just rely on pitching with pure speed. She needed to incorporate more movement and spin.

“She was trying to blow it by people and trying to throw 80 mph. I told her you are not going to beat people throwing 80 mph and straight,” VanBrakle Prothro said. “That does not beat people anymore. The hitting coaches are too good and the scouting is too good.”

The Alabama coaches showed Fouts numbers from Diamond Kinetics and Rapsodo during practices to help her better understand what they meant.

“Just giving her as many visual examples as possible to show her how to make the ball dance a little bit,” VanBrakle Prothro said. “It’s harder to hit if you can do that, and she really started to understand that even more once we did that.”

Even when she’s not pitching, Fouts stands beside VanBrackle Protho in the dugout to listen to what she’s saying about different batters. She watches film and takes notes about each hitter to devise a plan of attack.

“She is really becoming more of a student of the game,” VanBrackle Prothro said. “I think that kind of stuff makes any pitcher better, to really pay attention to what they are doing in the game and remembering what they did and how to make adjustments.”

As Fouts attempts to lead the Tide to the program’s second national title, residents across the state of Kentucky are following closely.

The local radio station in Grayson is providing regular updates on Alabama’s games, and another banner is likely already in the works to be displayed if the Tide pull through.

Laken Kipp won’t miss a second of the action. The 12-year-old Grayson native has met Fouts several times and she’s left a lasting impression after every encounter.

“She always encourages me to do better and has helped me out so much,” Kipp said. “I have always looked up to her, and now seeing what she can do makes me want to see what I can do. I want to be like Montana and play in college one day.”