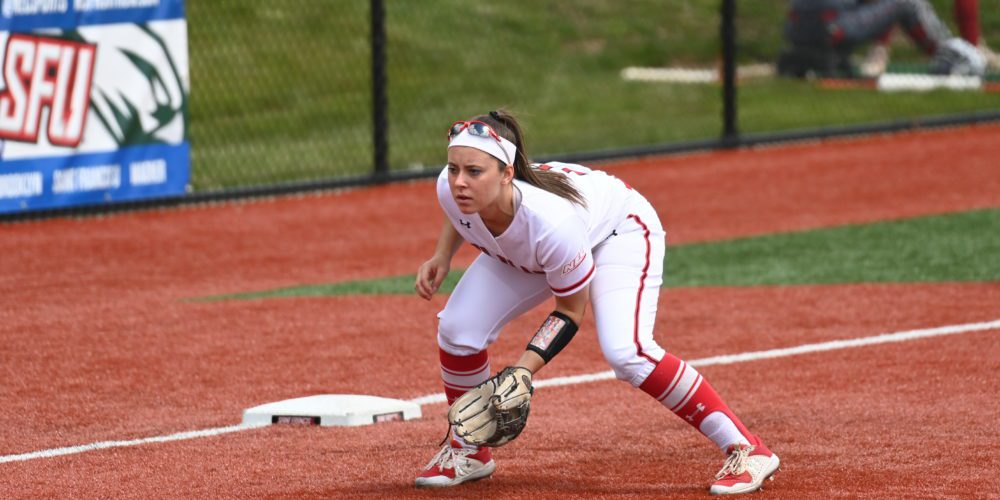 Saint Francis infielder Mekenzie Saban’s difficult freshman season was about to get worse.

When she stepped to the plate during a 2018 game against defending national champion Oklahoma, the rookie was still looking for her fourth hit in nearly 30 collegiate at-bats. A month into her career with the Red Flash, she was hitting .115 in sporadic playing time.

Staring back at her from the circle was Paige Parker. Of the eight batters who preceded Saban that day, five had already worn a path back to the dugout after striking out.

“You’re facing Oklahoma — and you’re sitting in the box, waiting for this rise that you know is coming,” Saban recalled. “You’re definitely nervous.”

She struck out swinging. It was her only plate appearance in a run-rule defeat.

Many players know how she felt in that moment. Everyone struggles. Few know success to the degree she enjoyed in 2021. Saban ranked 12th nationally with a .452 batting average a season ago. In a proverbial sport of failure, her .508 on-base percentage proved she succeeded more often than not. She had the ninth-most hits in the nation — tied with Oklahoma All-American Jayda Coleman. And her final two hits for the NEC champions came against Oregon and Texas in the NCAA tournament.

For good measure, having already earned her undergraduate degree in accounting in just three years with an unblemished GPA at the school near Pittsburgh, she also completed the first year of her MBA program in 2021.

Ask Saban how it happened, how she went from the depths of freshman frustration to the heights of excellence, and she keeps coming back to the idea that what matters is what you do when no one is watching. The extra swings. The extra work. Striving for an A instead of settling for a B that no one would hold against you. Through her own early struggles, a coaching change and a pandemic, she’s done plenty in moments when it would have been easy to do less.

Maybe she’s done enough. Maybe the opportunity to play an extra season is as much our good fortune as hers. She already seized her opportunity to make the most of all the sport has to offer. We still have an opportunity to appreciate all that a story like hers offers the sport. Maybe people like her are who we should be watching.

“She’s helped me understand myself a little bit better,” Saint Francis coach Jessica O’Donnell said. “Just be present and give it everything you’ve got. She’s taught me a lot over the years, in the sense of her work ethic.

“Nothing less than your best is acceptable. That’s how she lives every aspect of her life.”

It makes sense that Saban (who is related to the late Buffalo Bills coach Lou Saban but not, to the best of her knowledge, in any significant genealogical way to Alabama football coach Nick Saban) grew up idolizing Caitlin Lowe. It makes sense not merely because both are lefties, although that similarity drew Saban to the former Arizona and Team USA star who is now head coach at her alma mater. But also because Lowe is the gold standard of work ethic. Lots of kids wanted to play like Lowe. Upon closer inspection, not many wanted to work like her.

So it was a big deal for a young Saban to meet Lowe when the outfielder, along with Cat Osterman and Kelly Kretschman, put on a clinic in Pittsburgh. But Saban got something more meaningful than a picture when she approached Lowe after a session on slapping. People told Saban she should be a slapper. She was a lefty and she was fast. The math was simple. Except she wasn’t sure it was right for her. Lowe told her it was more important to be herself. Staying true to that was more likely to take her where she wanted to go than any hitting technique.

The strikeout against Parker and the Sooners didn’t mark the nadir of Saban’s debut season. She didn’t get her fourth hit as a collegian that day. Or in the next game. Or the game after that. She didn’t get another hit for more than a month — and it was the last hit she got all season.

She walked 10 times and scraped together a .300 on-base percentage. But four singles in more than 50 plate appearances wasn’t the introduction she envisioned. Not for someone who hit .629 and .721 in her final two high school seasons.

“To say that it didn’t get to me wouldn’t be completely honest,” Saban said. “It made me question my identity. A lot of us come into college and all we know is softball. That defines us. You’re not Mekenzie Saban — you’re Mekenzie Saban the softball player. That’s your mentality.

“So when you get to college and you don’t succeed at what you’re known for, it hurts you in more ways than just your stats. You question a lot of things about yourself. It was really difficult for a minute there.”

In the months followed, she tried to figure out what about her interaction with the world wasn’t dependent on softball. Who was she when you took away the cleats and bat?

“With or without softball, these are the things that I am,” Saban said of her period of soul searching. “I love softball. Softball is a big part of my life. But it doesn’t define me.”

More Than a Number

Start with the part of the college experience we don’t spend much time celebrating.

In kindergarten, Saban trailed peers in reading comprehension skills. She hadn’t attended preschool and catching up was initially slow going. But she always had a knack for numbers. More than that, the daughter of an engineer enjoyed numbers. Whether or not she got to the solution by the route a teacher intended, she always got there. She didn’t need anyone to hand her a sheet of paper to know how a 3-for-4 or 2-for-3 day changed her batting average.

When a high school teacher introduced her to the world of business studies, she was hooked.

“I feel confident when using math and working with it,” Saban said. “And I like talking a lot, so business is a good route for me.”

Even as she quickly put her freshman season behind her on the field, leading Saint Francis with a .367 average as a sophomore in 2019, she was achieving even greater excellence in the classroom. A 4.0 GPA was a given. By last year, as a graduate student pursuing her MBA (memorably alongside her dad, who went back to school and sometimes sought scouting reports on professors from his daughter), she was a third-team Academic All-American.

Of more than 30 players honored as the best of the best on the field and in the classroom, only two hit .400 with a 4.0 GPA and played in the NCAA tournament: Bailey Hemphill and Saban.

And a reminder that softball doesn’t define her; it’s merely one more expression of her identity. The identity that infuses everything she sets her mind to in life. Be yourself. In everything.

Saban was part of the player panel that interviewed coaching candidates after her freshmen year, when Jennifer Patrick-Swift departed after a very successful stint to take over at NC State. In O’Donnell, she found a mentor she connected with almost immediately. She still stops by the coach’s office most days to talk about whatever is on her mind, softball or otherwise. To Saban, that outlet was an important resource in her growth, in figuring out who she was.

But it’s equally telling that the new coach didn’t see someone in need of fixing.

“Let her be who she is,” O’Donnell said of her approach. “Let that kid run with what she has and trust her in that process.”

In conjunction with her academic success, Saban completed two extended internships with PNC, the Pittsburgh-based financial services company. She’ll continue on with the company when this season is over, with another internship program and a full-time role (although O’Donnell can’t help but wonder if coaching will someday pull her out of the corporate world).

First there is the season she didn’t expect to have — the season she assured O’Donnell she wanted to play the moment the NCAA extended eligibility in response to the pandemic-shortened 2020 season. Softball may not define her, but she still has a chance to define a season for a team with aspirations to do more than merely make another NCAA tournament.

“There are thousands of girls — whether they’re competing against you, competing for a position on a team, whatever the situation is. You have to be the best, or at least work the hardest. Having that routine and that place allowed me to strive above the girls who aren’t putting in the work. That’s been something that really drove me.”

It’s what you do when no one is watching that matters.

But in Saban’s final season of softball, it’s about time we all started watching.