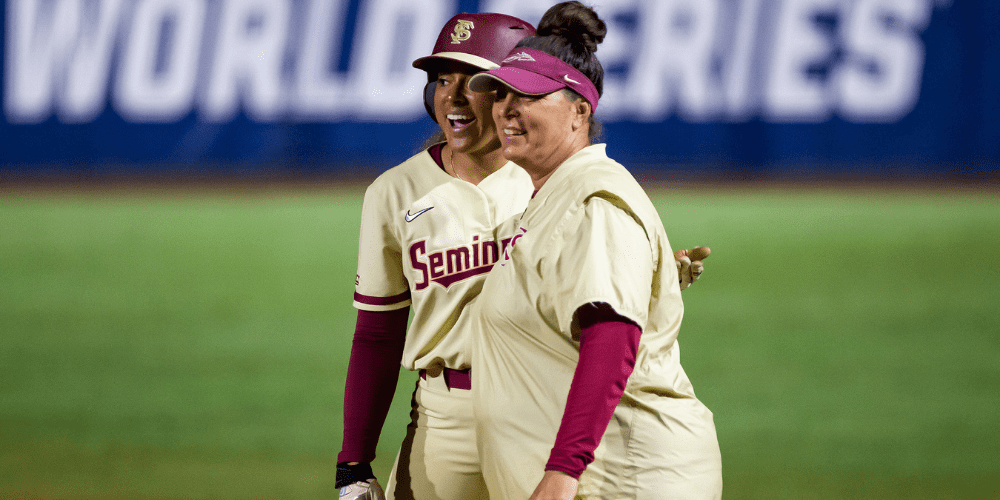 Get 20% Off An Annual Subscription. Use Coupon Code: bracket21

OKLAHOMA CITY – The condensed schedule at the Women’s College World Series has been a contention point among coaches for years.

They’ve pleaded with the NCAA to extend the event beyond seven days and build in more time to give players rest and not force them to risk their health and performance by playing in less-than-ideal conditions.

But after Florida State and Oklahoma State walked off the field at 2:18 a.m. last Sunday morning in a game that started just before midnight, it seemed to have struck a nerve more than previous years.

More people are paying attention to women’s sports and the disparities that exist. There’s more concern about college athletes’ rights and how much more they deserve.

And social media has provided a platform to voice concerns to a wider audience and help hold governing bodies accountable.

Softball coaches know to strike while the iron is hot and not stay silent any longer.

“It’s very uncomfortable when we are talking to our players about standing up for what is right. Yet, what is happening around us is not right,” Oklahoma head coach Patty Gasso said. “And the players will do whatever you put in front of them. They’re not going to complain. They’re going to go to bed at three, wake up at seven, because it’s the World Series. But that’s not the memory they need to have.”

Michigan head coach Carol Hutchins could only nod her head in disgust and familiarity while watching the games from home. Her teams have played in late games in the WCWS, including a game that finished at 2 a.m. following a weather delay. The Wolverines had to be back on the field at noon the same day.

Hutchins, the longest-tenured coach in Division I softball and a Title IX trailblazer, can’t believe the exact same issues are still present more than 15 years later.

“They always say it’s about the student-athlete welfare unless it’s about TV or money, then it’s about TV and money,” said Hutchins, in her 37th season leading Michigan. “My god, there is no welfare in that. It’s just not right.”

The decision to make FSU and Oklahoma State play just before midnight last Saturday was made after considering “several variables,” according to Liz Turner Suscha, the managing director of championships and alliances at NCAA.

Guidelines in the WCWS participant manual states, “If possible, games will not be scheduled to begin before 9 a.m. or after 11 p.m. however, due to inclement weather or administrative demands or unforeseen circumstances, the schedule may be adjusted.”

Turner Suscha, in her first year as the manager of the softball tournament, said the committee chair spoke with both head coaches to communicate the plans for the night.

“The fact that the teams were here and they prepared and were planning on playing Saturday night definitely was a weighty variable,” Turner Suscha said. “The alternative is to go home and come back in the morning, but then you could potentially have a team playing three games in one day and the committee doesn’t want that.”

The committee could have faced another PR nightmare on Sunday when another weather delay hit the area. But organizers decided to extend the event one full day by playing both “if necessary” games on Monday and starting the championship series on Tuesday.

“From a competitive equity standpoint and rest and recovery standpoint, that was more of a decision that was easier to calculate because we know we can’t do one game one day and one the next day,” Turner Suscha said. “The calculus for that was a little more straightforward.”

Having an extra day or two built into the WCWS schedule for weather issues and not having teams play doubleheaders is something coaches have wanted for years.

They believe that once teams reach this stage of the postseason, they should be able to play each game at full rest. But many have been told it would be too costly or won’t work for television.

The explosive growth of college softball, however, makes that argument hold less weight. The TV ratings on ESPN are just one of the clear indicators of the sport’s massive draw.

The FSU-Alabama game on Monday averaged 1.63 million viewers, the second-most viewed pre-finals game on record. The pre-finals audience averaged 1,064,000 viewers, an increase of five percent from 2019 when the event was last played.

“The potential is endless and we are not done yet,” said ESPN senior coordinating producer Meg Aronowitz. “We are going to keep kicking down some doors in this sport. We are just going to keep growing and growing. I really believe that this year is going to be the year that crashes through that ceiling.”

Softball is not the only sport to deal with delays and late finishes at NCAA championships. Tennis, for example, has started matches at midnight that were not completed until nearly 4 a.m.

Hutchins understands not everything can go exactly according to plan, but she wishes more consideration was given to sports other than football and basketball.

She recently appeared on MSNBC to discuss the disparities and inequities that exist.

Turner Suscha said the softball committee is open to having discussions and soliciting feedback from the “stakeholders” of the WCWS, including the National Fastpitch Coaches Association, ESPN, USA Softball, Oklahoma City officials and the players.

“The committee in the past has had some ideas about how to better distribute the entirety of the series for these same reasons – being able to absorb weather delays and to absorb when games run three hours instead of 2 ½ hours,” she said. “I think there is definitely an interest for the committee to restart those conversations, and I think there is definitely a solution that is going to work for everyone.”

FSU head coach Lonni Alameda would be happy to engage with the committee on ways to make the event a better experience for the players involved.

After FSU’s win early Sunday morning, the Seminoles arrived back at their hotel at nearly 3 a.m. and had to wake up for Covid testing at 9:30 a.m.

“Having lived it now, I really want to be a part of bringing that discussion up, because I know in our sport, we’ll play until all hours, we’ll do what’s ever needed because we’re a blue-collar sport,” Alameda said. “But on the other side, when we’ve got something so great we’ve got to protect it and take care of it. So that conversation has to start happening.”

Although Hutchins has a laundry list of disparities and issues that she would like to see fixed, she believes the most obvious place to start is the schedule.

It’s been apparent for years, but the amplified outrage this year might finally push the NCAA into action.

“My biggest hope is that they extend the series. I am not a bracketologist, but I just know what they are doing is too compact,” Hutchins said. “Teams really should be able to go home and sleep and recover. They have to recover and get ready physically as well as mentally. Right now, we get 30 minutes and a Subway sandwich in the middle. That’s not good enough.”