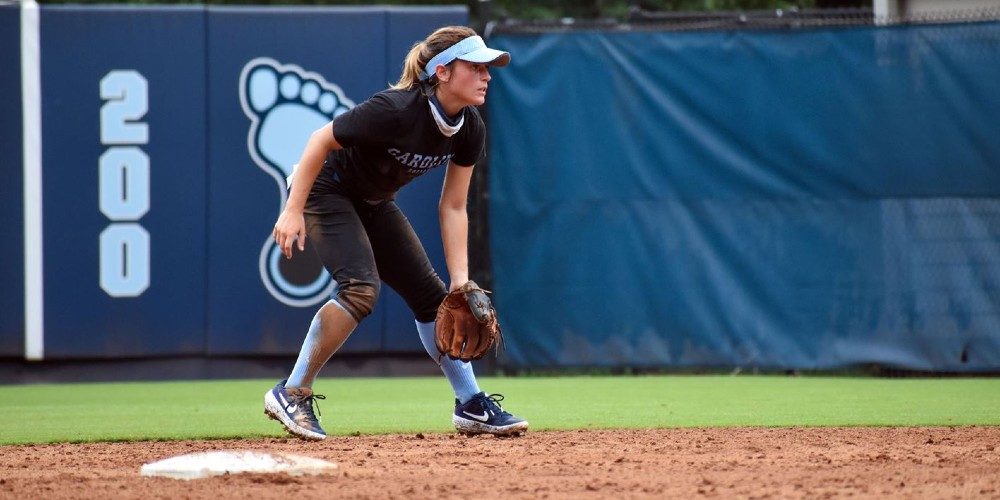 UNC’s Kayla Baptista Gets Her Call to MLB

Baptista spent more than $1,000 in gas money driving from her home in Rhode Island to the fields and back each day. She did anything she was asked, trying to soak up as much knowledge as possible.

It led to yet another historic opportunity for the University of North Carolina sophomore.

Baptista was recently hired as a player development coaching apprentice for the Texas Rangers. She is the first female hired for a coaching role in the organization’s history

“That is a big deal,” said Josh Bonifay, the Rangers’ farm director. “She is very qualified, very passionate, very driven and we as an organization value those things. She fits in the Rangers culture very well.”

Baptista, 20, joins a growing number of females being hired in Major League Baseball for on-field coaching roles, including many with college softball backgrounds.

Baptista will be joining the Rangers once UNC’s season ends. She will begin in the Dominican Republic and then travel throughout the minor leagues, spending two or three weeks at each level.

“They have worked with me very well with my schedule and it proves to me they really care about me and really want me. It honestly feels like being recruited again for softball,” Baptista said. “They are starting my contract early in terms of pay, but they know I won’t be able to go to the Dominican Republic until I am done with my season.”

Baptista’s role is ambitious given her age, but she is confident she can balance being a Division I athlete, taking classes and learning the ropes of pro baseball.

“I am the type to do whatever it takes to get what I want,” said Baptista, who started 23 games and batted .267 in 60 at-bats for the Tar Heels last season. “The coaches at UNC have come to understand this is my career and my dream so they have allowed me to miss a few practices to go to instructs and interview for jobs in baseball. I know I still have a job to do here too and that is to play softball and win an ACC championship.”

Baptista has been a baseball fan her entire life. Her family had season tickets to the Boston Red Sox, and she regularly attended Triple-A games when the Sox’s minor league team was located in Pawtucket, R.I.

Her passion to work in the sport grew even stronger once she took a trip to Aruba to help with camps and clinics run by the 297 Baseball Academy.

The experience inspired Baptista to inquire about opportunities in the Cape Cod League. She emailed a few teams and got a response from Wareham.

Only after she glanced at the coaching staff did Baptista realize she’d be getting an education from the “Mt. Rushmore” trio of Jerry Weinsten, Ron Polk and Don Sneddon.

“They are legends, so I am very fortunate to have them as my mentors. That experience was integral for me,” said Baptista, the 2020 Gatorade Player of the Year in Rhode Island. “If I had a bad experience there, maybe that would have changed things. But I was very fortunate to work with those coaches and players. They respected me and weren’t jerks to me. I absolutely loved helping them.”

“We don’t see many girls at practice and she told me she was an intern with our team,” Polk said. “I told her to do whatever she wanted and she grabbed a fungo bat and then threw BP. I said to myself, ‘What do we got here?’ She was really good.”

Baptista was quick to contact Polk about the news of her role with the Rangers.

“I coached college for 55 years and I was a little surprised the Rangers would take a young lady like that to do what she is going to do. But then, they know Kayla as well as I do and she can handle it,” Polk said. “The key is if she can get the guys’ attention and let them know she knows what she is talking about and can help them, and I think she can.”

Bonifay isn’t worried about how Baptista will adapt to the minor league level. He said the Rangers plan to have her involved in every step of the process to prepare for games.

After spotting her at the Cape Cod League, the Rangers invited Baptista to a coach ID camp in Arizona last October.

“It was basically an in-depth interview,” Baptista said. “They basically threw me into the fire that week. They had me put a group through hitting and running portions of the infield practice. I went to dinner with some of the staff members one night, and I think that is where they realized I was serious about this. We talked baseball for two straight hours about philosophies and strategies and culture. We covered everything.”

The Rangers offered her the job before she left to return to school.

“I had other offers, but I chose the Rangers because I loved the job they offered,” Baptista said. “It was very unique and it will give me a chance to experience a lot of things.”

Given she’s only a sophomore at UNC, there is a chance Baptista may leave early to pursue her coaching career more intently in MLB.

“That has definitely crossed my mind. Coach P (Donna Papa) said she has wondered the same thing. She actually mentioned a program for players from UNC when they get drafted and can come back and get their degree and it’s paid for,” Baptista said. “I don’t know if I would qualify for the same thing because I would be coaching and not playing. But it would be kind of unique to see if they would still honor my scholarship or pay for my education if it does happen.”

Walking away from her playing career with eligibility still remaining wouldn’t be easy.

“I have played softball my entire life, so it would be tough,” Baptista said. “But if it means getting a step closer to my dream of managing in Major League Baseball, I have to do what I have to do.”

Baptista is grateful to have a growing fraternity of females in MLB. She recently took part in a story MLB is putting together that features 11 on-field female coaches.

Baptista did a mentorship with Rachel Balkovec two years ago. The New York Yankees recently named Balkovec as the manager of the Low A Tampa Tarpons, making her the first woman to manage a team affiliated with MLB.

“She has been through this ride along with me. She has been holding my hand the entire way and I am very fortunate to have her in my corner,” Baptista said. “She is very big on the idea of earning everything. She hit home on the fact that, yes they are trying to hire women now, but you have to feel like you earned it and deserved this position and worked very hard for this. There is no way to prove that besides just showing up and kicking ass.”

Bonifay fully expects to see Baptista do just that.

“She is going to be a very good coach for a long time,” he said. “We are extremely fortunate to have her and we can’t wait for the season to start and get her out there around our players and our teams.”

Baptista views her history-making role with the Rangers as the next step to achieving her childhood dream.

“Every single aspect of my life has a purpose towards my goal,” she said. “I am full steam ahead with the goal of managing in Major League Baseball.”