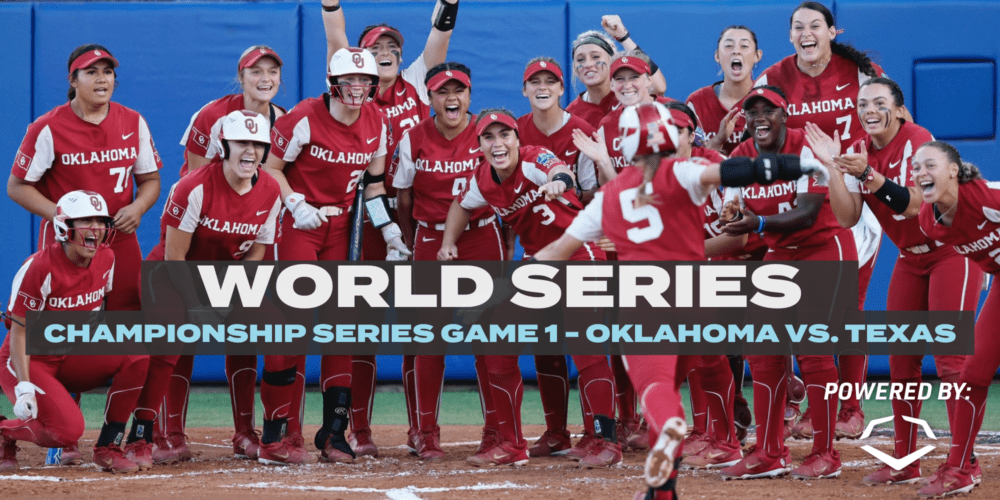 There is no run rule implemented once teams reach the championship series of the Women’s College World Series. Texas may have wanted to petition for a change on Wednesday night.

No. 1 Oklahoma showed no mercy on its Big 12 rival, using a blitzkrieg of home runs to bury the Longhorns 16-1 in the opening game of the best-of-three showdown.

Sparked by two home runs apiece from Jocelyn Alo and Tiare Jennings, the defending national champion Sooners never took their foot off the gas on offense at USA Softball Hall of Fame Stadium.

By the third inning, Oklahoma had already scored 10 runs and hit four home runs as Texas cycled through four pitchers to try and find any solution to slow down the OU offensive freight train.

Oklahoma (58-3) has scored 31 runs in its last two games in OKC after beating UCLA 15-0 in the semifinals in five innings on Monday.

“I am not surprised,” OU head coach Patty Gasso said. “I think they showed me last year how good they could be offensively. I think having another year together showed they’re not afraid of these settings. They really embrace all of this excitement and the big stage. I think they’re at their best when the lights are bright and the stage is big.”

Texas (47-20-1), the first unseeded team to ever reach the championship series, is one of only three teams to beat Oklahoma this season. But the Sooners have beaten the Longhorns in each of the other four meetings, including twice in the last five days in OKC.

Both teams started senior transfers in the circle, with Hope Trautwein getting the call for OU and Hailey Dolcini for Texas. Only Trautwein remained for more than a few batters.

Trautwein recorded two quick outs to start the game and then struggled to find the zone. After giving up a double to Bella Dayton, she walked three straight Longhorns to bring home the first run and give Texas a 1-0 lead.

But the NCAA’s all-time home run leader changed that in a hurry.

Following a Jayda Coleman lead-off double, Jocelyn Alo stepped to the plate. The fifth-year senior belted her first home run of the night into the left field stands to put OU ahead and launch a spree of early runs as the Sooners batted around in a foreshadowing of what was to come.

Taylon Snow demonstrated the unrivaled depth of the OU lineup five batters later. Snow drove a three-run home run to right center field – only her fourth homer of the season – to expand the OU lead to 5-1 and chase Dolcini after only 0.2 innings.

Texas inserted freshman Sophia Simpson, but she was quickly removed “for health reasons basically” according to Texas head coach Mike White, after facing only two batters and putting both on board with a hit-by-pitch and a walk. The Longhorns finally escaped when sophomore Logan Hulon induced a ground out to end the inning.

The OU home run derby continued in the third inning with Jana Johns hitting a solo shot and Jennings blasting a three-run home run to balloon the OU lead to 10-1 as Texas went to the bullpen for its fourth pitcher.

Alo and Jennings were at it again in the fifth. OU’s dynamic duo hit back-to-back solo shots for a 14-1 lead. Along with it being the 122nd of her career to extend her all-time NCAA record, the home run was Alo’s 34th of the season to move into the NCAA lead.

“It’s awesome being able to see what they can do,” Snow said. “Throughout our whole lineup, I feel we have each other’s back. If the next person is on, the next person will pick them up. I told Jana Johns to pick me up, she goes out and hits a home run. It’s pretty awesome to see those things happen.”

Alyssa Brito drove home the single-game WCWS record-tying 16th run for OU with a single up the middle in the sixth to score Alo.

It was not the WCWS championship series debut Texas wanted. The Longhorns are 6-0 in elimination games this postseason, but it will take a huge change of fortunes to take down the mighty Sooners.

“Sometimes you just got to tip your hat, it’s their night, they were fired up,” White said. “We just got to find ways to get them out. You got to throw their timing off. We didn’t really have an off-speed to do that with, so they were able to kind of really be on time and be on plane. It makes it very difficult.”

Oklahoma is just one win away from capturing its second straight title and sixth in program history. An offense that seemed unrivaled last year has been even better in the encore.

The Sooners, however, aren’t taking anything for granted. They were already focused on producing a similar show in Game 2 on Thursday night.

“We’re prepared. We’re going to have the momentum,” Alo said. “It’s time to win another ballgame.”

The team that wins the first game of the best-of-three championship series has gone on to win the title 75% of the time. Since the best-of-three format was instituted in 2005, the only teams to lose Game 1 and win the series are:

Numerous records were set or tied during the game. Among them:

Player(s) of the Game