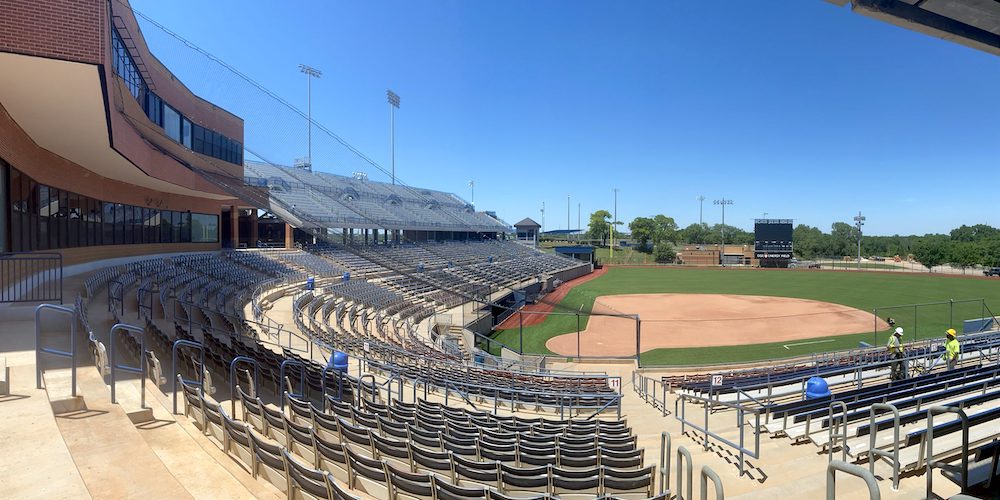 The home to the Women's College World Series saw some new upgrades.

Chuck White couldn’t wait to hear the crunch of the infield dirt under cleats and see how the ball bounced on a hard grounder to short. He couldn’t wait to watch an outfielder dig into the grass chasing down a fly and a pitcher drag her foot near the mound.

Like a proud father showing off a newborn baby, White was eager for the softball world to see the new field make its debut this week at the Women’s College World Series in Oklahoma City.

The $1.5-million field was part of an upgrade at the USA Softball Hall of Fame Complex that included expanded upper deck seating for an additional 4,000 fans.

But plans to showcase the renovations have been put on hold for a year after the coronavirus canceled the season, leaving the field sitting empty for what would have been the 30th run of the WCWS in OKC.

“It’s definitely sad because the World Series brings such an electric environment with so many people,” said White, the Sports Turf Manager at Hall of Fame Stadium. “Everybody is so excited, and you can feel it down close to the coaches and players on the field. I will miss the camaraderie we have for that one week. I look forward to that each year.” 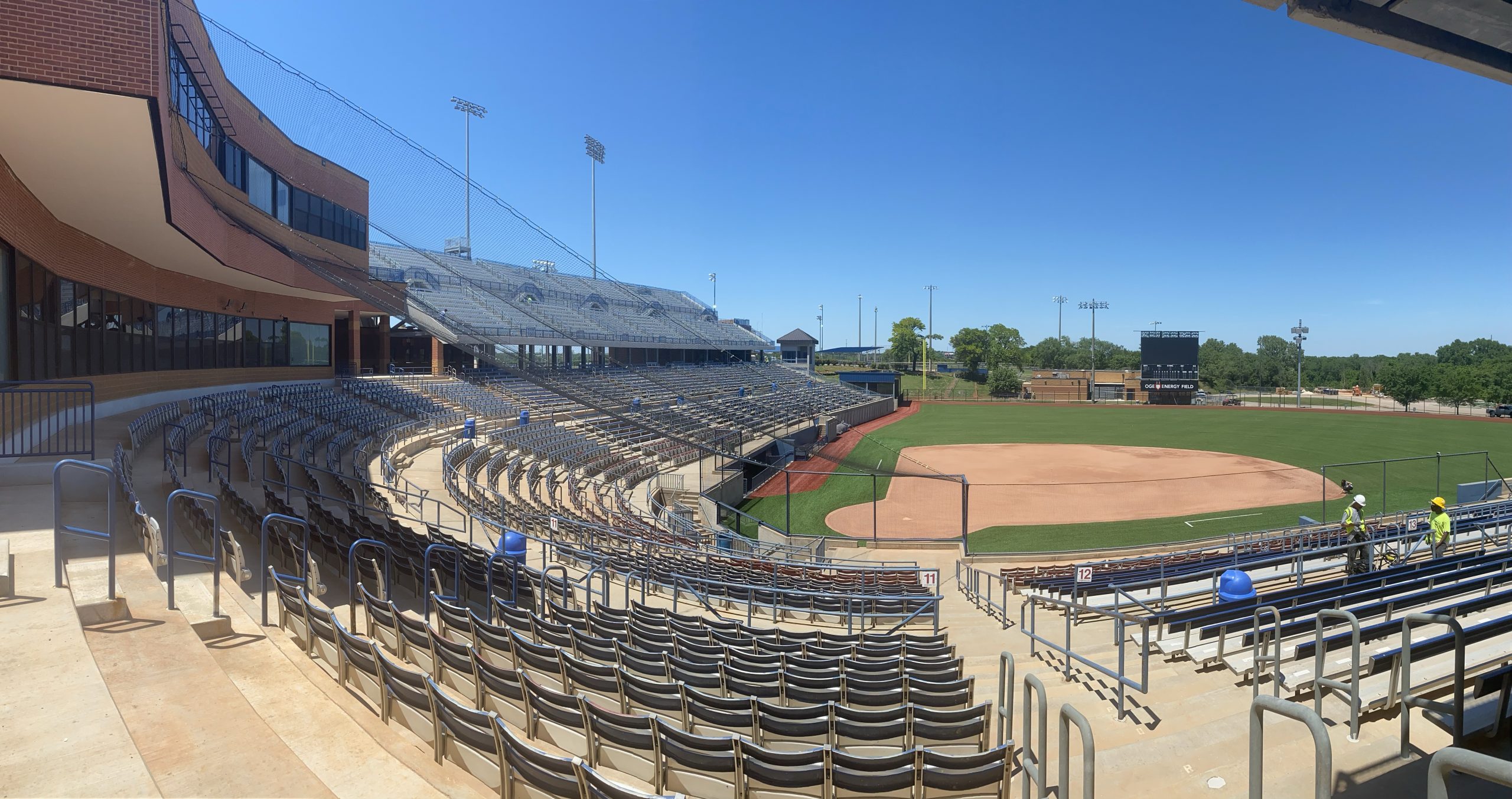 White and his crew are some of the busiest people at the WCWS, arriving at 6 a.m. and not leaving until after midnight. They are constantly prepping fields, fixing any emergency issues and tracking the radar for incoming weather.

The constant grind is a true labor of love for White, who began grooming his own fields as a high school coach in 1985.

White got every turf manager’s dream opportunity this year with a chance to install a new field at Hall of Fame Stadium with major upgrades. He worked in conjunction with Lloyd Sports + Engineering to make it a reality.

“They came in and gave us a design, but I told them the things I wanted and that I needed and we worked together,” White said. “We merged my vision with their engineering to make it happen.”

The biggest need at Hall of Fame Stadium was a quality underground drainage system because of the storms that regularly roll through Oklahoma and cause delays during the WCWS.

Getting water off the field and making it a stable playing surface as quickly as possible is always a big concern. Tarps can only provide so much protection from the elements.

The new field can catch up to 15 inches of rain and still be playable.

Four inches of gravel and four inches of sand sit below the infield surface and outfield sod. The outfield sod is Tahoma 31 bermudagrass, which derives its name from Native American word, Tahoma, which means frozen water.

“Each field is like a person and has a personality,” White said. “This new field has a new personality that we don’t know yet from a standpoint of how many times to mow, how to fertilize and how to water it. If you have cloudy weather, sunny weather, windy weather, wet weather – we have to relearn the field and figure out how to take care of it so it plays well.”

White has a regular three-person crew that takes care of the grounds on normal days. During the WCWS, the crew expands to nearly 15. Among the added members are White’s two sons, his daughter and local baseball and softball coaches. 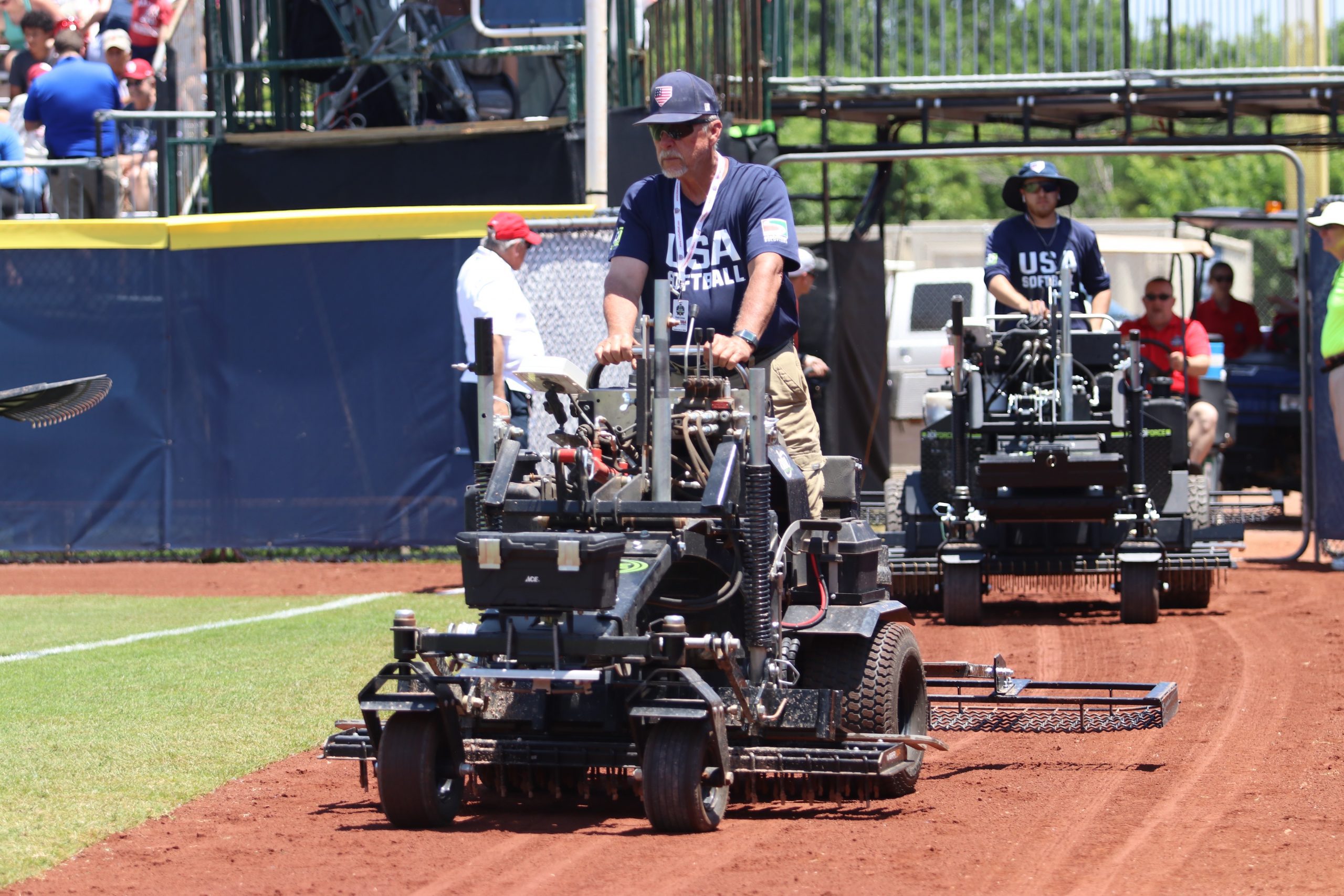 They are each assigned specific roles to make the field preparation process more seamless.

“So much of it is a choreographed dance of those 14-15 crew members,” White said. “Everyone does a job and a half. They do their job and then help the next guy once they are finished.”

The crew doesn’t have any time to waste once the first pitch is thrown each day.

“ESPN gives us about 13 minutes between games, so in 13 minutes my whole crew goes out and completely redoes the whole infield surface,” White said. “We re-chalk the lines, we pack the mound, we pack the plate and the catcher’s box and drag the field. It’s just a complete overhaul in 13 minutes.”

White’s crew is not only responsible for the main field, but the two outer fields at the complex used by teams for practicing.

“We must maintain the same level as the stadium because the teams go there to warm-up and they want the same infield and same grass so it’s pretty much a simulation once they go to play,” White said. “We spend a lot of time getting those fields ready and prepared to be in shape during the World Series.”

Although the standards don’t shift much, White often gets input from head coaches about their playing surface preferences.

“It’s important that I know what they need and what they desire,” he said. “Some like a little more water on the infield and others don’t. I have to try and meet everybody’s expectations. Most of them are very kind and complimentary and work with us on things.” 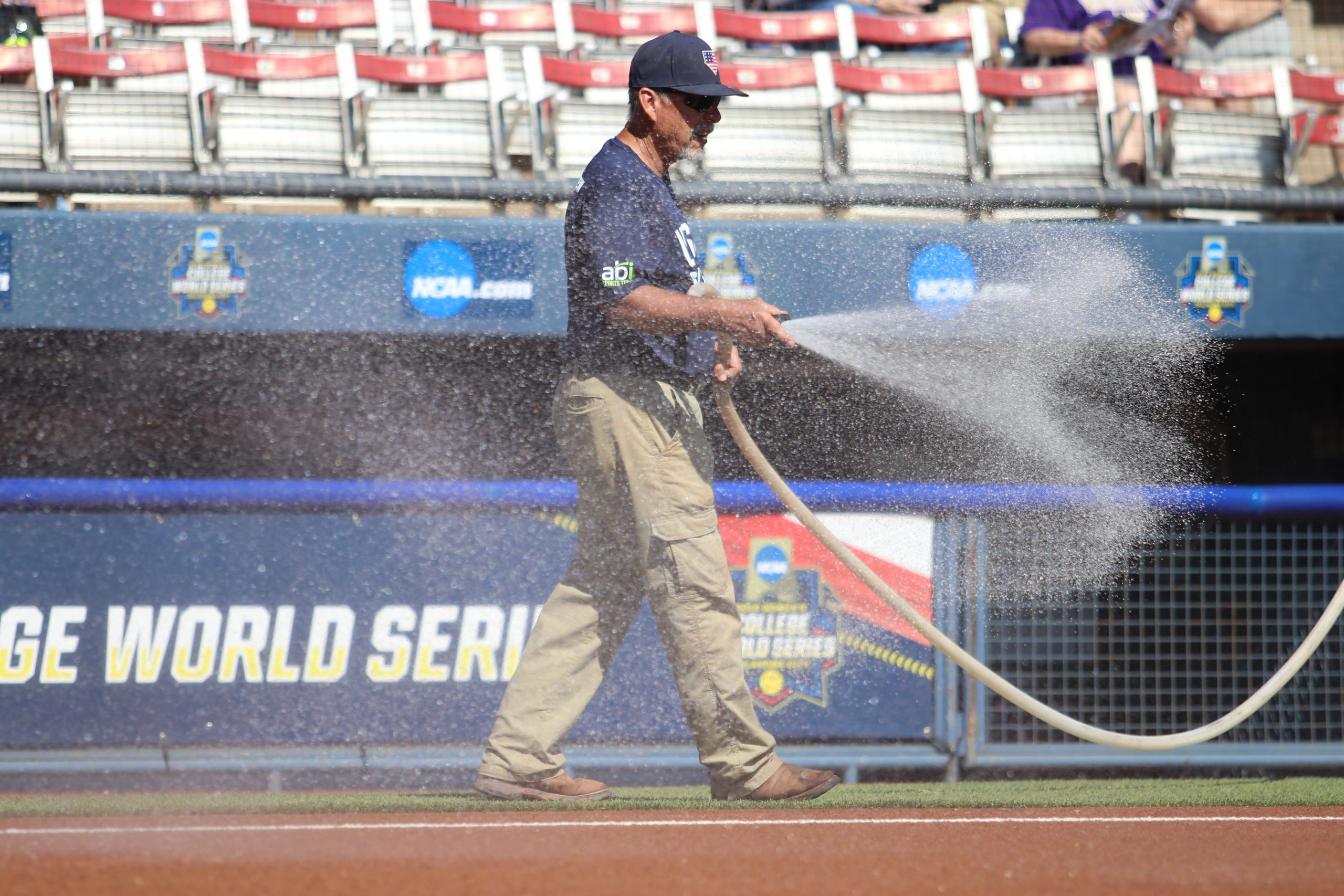 Chuck White began grooming his own fields as a high school coach in 1985. (Credit: USA Softball).

The grounds will be eerily quiet this week as White tends to the new field.

Rather than sprinting to the finish line to get everything in order, he has more time for trial and error before the showcase event returns again.

In no way does it ease the pain of not crowning a champion in front of a packed crowd, but it’s a bit of a silver lining amid the sadness.

“If push came to shove we could have played on this field a week ago if we had to,” White said last week. “We hate that we missed the World Series because of the COVID issue, but it allows us a little breathing room to fine tune and not be so rushed on finishing the field.”