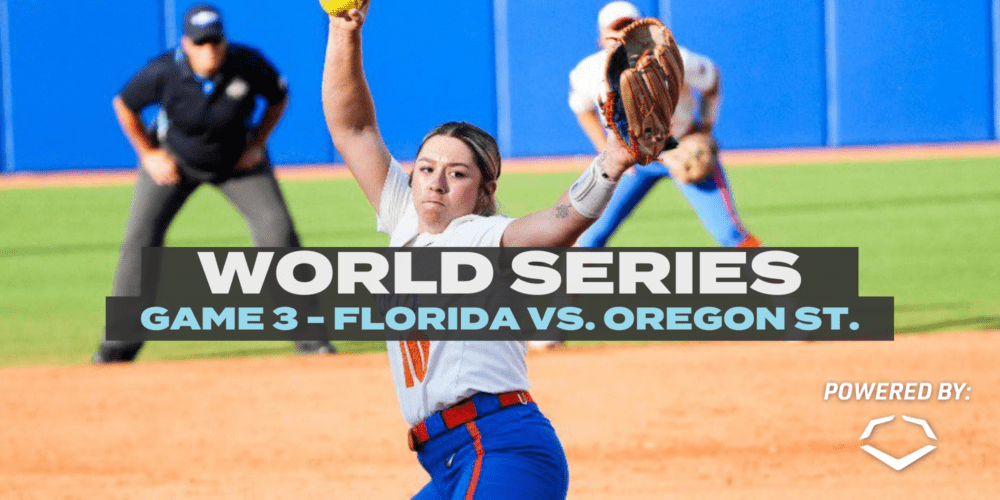 Natalie Lugo has become a nice security blanket out of the bullpen for the Florida Gators during their postseason run.

The fifth-year senior helped rescue Florida from some early trouble against a shorthanded Oregon State squad.

Trailing 1-0 and facing the bases loaded with no outs in the second inning, Florida head coach Tim Walton pulled freshman Lexie Delbrey and inserted Lugo. The savvy veteran escaped the jam with a line out, strikeout and ground out.

Florida took the lead in the bottom half of the inning and never looked back to advance into the winner’s bracket. Lugo threw 6.0 innings of shutout relief, allowing just one hit with six strikeouts and no walks to pick up her third straight win out of the bullpen in the postseason for the Gators.

Underdog Oregon State dropped a bombshell before the first pitch by announcing all-everything star Mariah Mazon wasn’t available. It was not an injury or disciplinary issue that sidelined Mazon, according to OSU. Head coach Laura Berg called it an “unfortunate circumstance that is out of Mariah’s control.”

It resulted in a freshman vs. freshman matchup in the circle, with Oregon State starting Sarah Haendiges and Florida going with Delbrey.

The Beavers juggled their lineup and put a scare into Florida early.

Sophomore Xiao Gin doubled to right field and scored on an RBI single to center by Frankie Hammoude to give OSU a 1-0 lead and pump up the always energetic OSU dugout. It was only Gin’s sixth hit of the entire season. She entered batting .128 in 39 prior at-bats.

The Beavers seemed on the verge of adding to their lead in the second by loading the bases with no outs. But Lugo, who recorded both wins in relief for Florida in the Super Regional win over Virginia Tech, replaced Delbrey and stranded all three OSU runners.

Once Lugo returned to the dugout, she patted Delbrey on the back and provided the rookie with some words of encouragement.

“She’s hot right now,” Florida head coach Tim Walton said of Lugo. “Who puts a kid in in the second inning? She’s just been doing it for us, and I’m really happy for her because she works really hard, and she’s had a good season.”

Florida’s offense didn’t waste the opportunity. The Gators scored two runs in the bottom half of the second with two outs on a hard hit ball by nine-hole hitter Avery Goelz that bounced off the glove of Hammoude at first base. It was one of four errors committed by the Beavers.

Goelz helped push across two more runs in the fourth. Cheyenne Lindsey led off the inning with a single, Katie Kistler laid down a bunt single and Goelz drove them both home with a single up the middle for a 4-1 Florida lead.

After coming close to hitting a home run earlier in the game, Charla Echols drove a ball deep over the centerfield wall to expand the lead to 5-1.

Florida tacked on two more runs in the fifth, including another RBI from Goelz. She finished 2-for-3 with three RBIs while Cheyenne Lindsey was 3-for-3 with three runs scored. Echols was 2-for-4 with a home run and triple.

“I’m really confident right now,” said Goelz, who has recorded six of her 19 RBIs in the postseason. “I feel really good, and it’s just like this is it. This is the end of the season, so why not just give it all you’ve got?”

Oregon State wasn’t unaccustomed to playing without Mazon. She missed three weeks in March with an injury.

But her absence leaves a huge void in the lineup. The All-American is the lone senior on the OSU roster and has been a catalyst during the Beavers’ postseason run.

Berg couldn’t disclose why Mazon was missing – “the big elephant in the room” – and said she hoped to have her back for Friday’s game.

“Any time you don’t have a kid like Mariah in your lineup, it’s going to suck. But it is what it is,” Berg said. “We didn’t have her. You have to deal with it and play ball, and we didn’t play ball the way we’re capable of playing.”

Oregon State freshman catcher Des Rivera threw out speedy Florida freshman Kendra Falby trying to steal second base in the first inning. It’s not a common occurrence. Falby was 36 of 40 on stolen bases this season.

Florida’s top base thief had better luck. Skylar Wallace stole her 52nd base of the season in the third inning. But Rivera at least made it a close play at second.

Oregon State’s Madison Simon nearly hit a two-run home run in the third inning that drifted just foul down the left field line. Lugo tried to will the ball to travel outside the pole by mouthing “foul, foul, foul” as she turned to watch it fly. She got her wish.

Goelz made a big impact at the plate, but Lugo was the overall star. The fifth-year senior was super in relief yet again, picking up her third straight win for the Gators out of the bullpen.

Lugo threw 6.0 innings of shutout relief, allowing just one hit with six strikeouts and no walks.

Up Next: Florida plays No. 7 Oklahoma State on Saturday at 7 p.m. ET on ESPN.

“I told my team that from the beginning, if you want a chance to compete for a national championship, you have to win the first game,” Walton said. “It’s really tough not to. I don’t even know when we play next. It’s funny, the new formula, I’m not even sure when we go.”

Oregon State faces Arizona in an all-Pac-12 elimination game on Friday at 9:30 p.m. ET on ESPN2.