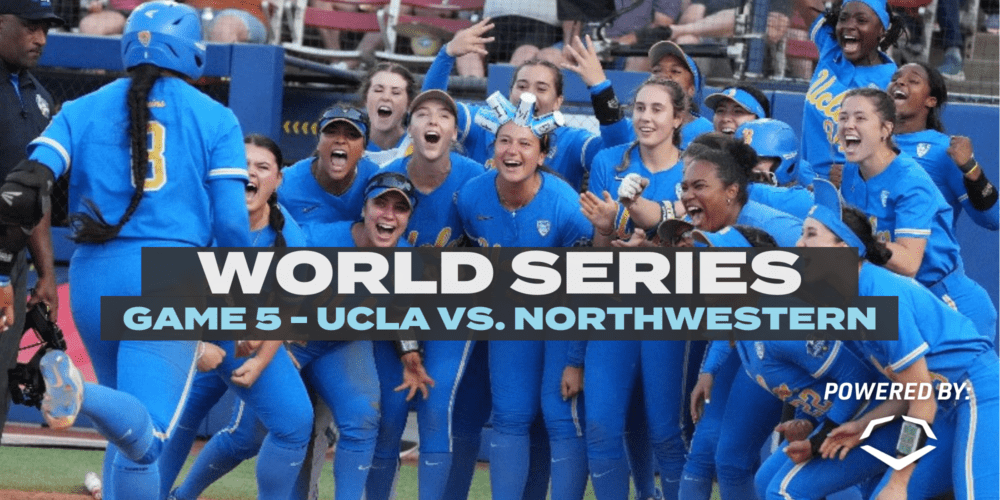 Hollywood couldn’t have scripted a fairy tale moment any better for Megan Faraimo.

Facing the best hitter in the Northwestern lineup with the bases loaded, two outs and elimination on the line at the Women’s College World Series on Friday night, the UCLA ace dug deep.

Faraimo rallied from a 3-0 count with three straight strikes against Rachel Lewis for an inning-ended strikeout looking in the fifth to protect her team’s slim one-run lead. Adrenaline still coursing through her veins, Faraimo led off the next inning with a home run deep over the left-field fence.

Her teammates gave the redshirt junior more insurance in the seventh as UCLA (49-9) survived to play another day in Oklahoma City and the Cardiac ‘Cats finally ran out of comebacks to end their season.

“I just told myself to throw strikes because I felt like no matter what, whether she gets a hit, whether I get her, my team was going to have my back either way,” Faraimo said of escaping the bases-loaded jam. “I just wanted to get us back in the dugout.”

It was an emphatic return for Faraimo (23-5) after a shaky outing in UCLA’s opener, when she gave up six hits and four earned runs in 2.1 innings in a loss to Texas. UCLA head coach Kelly Inouye-Perez promised her team would battle back, and the Bruins wasted no time scoring against Northwestern (45-13).

Kinsley Washington led off the first inning with a walk against Wildcats ace Danielle Williams, was sacrificed to second on a Bri Perez bunt and scored on an RBI single to left field by Delanie Wisz.

Faraimo and Williams settled into a pitching duel until UCLA capitalized on a costly error by Northwestern in the fourth inning to push across another run.

The Bruins loaded the bases on a single, a walk and a base hit. Washington popped a fly to short left field and Angela Zedak dropped the ball while trying to make a bucket catch on the run, allowing a run to score for a 2-0 UCLA lead.

Northwestern finally put runners in scoring position in the fifth inning on a single and a walk. Grace Nieto, the No. 9 hitter in the lineup, slapped a two-out RBI single that landed just beyond the reach of diving UCLA shortstop Bri Perez behind third base.

After Faraimo walked the bases loaded, Lewis approached the plate. The Big Ten Player of the Year had hit her 23rd home run of the season in Northwestern’s loss to Oklahoma on Thursday.

Lewis worked the count to 3-0, and Faraimo delivered two strikes for a full count. Faraimo caught Lewis looking on a low rise for the final out to strand the runners and protect UCLA’s lead. Faraimo pumped her fist emphatically as she bounded out of the circle and into the dugout.

She was doing the same in the next inning after she belted a solo home run – only her second home run of the season – to push UCLA’s lead back to 3-1.

“She’s just a straight dog, I’m so happy and blessed to be able to catch her,” said Wisz. “I’m just excited to see her continue to grow throughout the rest of this tournament and the rest of her career.”

Asked if she preferred the strikeout or the home run, Faraimo was a bit conflicted.

“Man, I don’t know. I almost want to say bases-loaded strikeout because I was kind of lit,” Faraimo said. “Going three strikes in a row, that was tough. I’m not going to lie, I didn’t really see that ball when I hit it out. I feel like the strikeout is more satisfying.”

The Bruins added three more runs in the seventh on an Alyssa Garcia RBI single, a squeeze bunt by Anna Vines and a fielder’s choice. The Bruins will get a day of rest before facing another elimination game on Sunday.

“The girls are fit, strong, prepared, we’re a little feisty right now,” Inouye-Perez said. “We got our back against the wall so we’re ready to play more ball.”

The Other Big K

Before Faraimo’s heroic turn, Williams had her own huge strikeout with the bases loaded and two outs against the hottest hitter in the UCLA lineup.

UCLA had already scored on a run on an error in the fourth inning when Delanie Wisz came to the plate. Wisz was batting .482 and slugging 1.000 against left-handers.

But Williams struck her out swinging to end the inning and keep the deficit at two runs.

Williams (31-6) gave up 10 hits and six runs – five earned – with seven strikeouts and five walks. The Big Ten Pitcher of the Year ended with two line scores not befitting of her dominance throughout the season. In Northwestern’s loss to top-ranked Oklahoma on Thursday, Williams gave up six earned runs on seven hits in 3.0 IP.

“What she’s able to do on the field is so selfless, and that’s I think really interesting for a pitcher who has literally carried us to be so humble about it and never get frustrated about if she doesn’t have run support or an error behind her,” Northwestern head coach Kate Drohan said. “I’ve never seen it in four years. She’s so steady with the game, and that’s why we all love her so much.”

The UCLA ace did it all to help her own cause. In the circle, she threw a complete-game five-hitter with 10 strikeouts and three walks. At the plate, she was 1 for 2 with the clutch home run when the game was still tight.