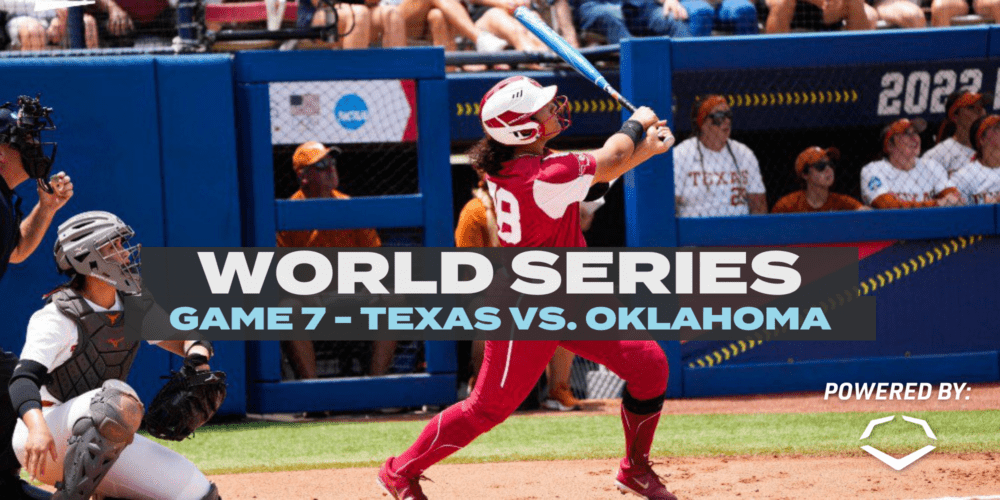 Any new fans watching college softball for the first time on Saturday afternoon didn’t have to wait long to learn why Jocelyn Alo is the best player in the sport.

In the first Women’s College World Series game ever televised on ABC in the event’s 40-year history, Alo belted a milestone two-run home run before an out had even been made to launch top-ranked Oklahoma to a win over Texas in front of a sold-out crowd at USA Softball Hall of Fame Stadium in Oklahoma City.

The defending champion Sooners (53-2) improved to 2-0 in the WCWS and will get another day off in the new extended format before their next game on Monday in the national semifinals.

“We just had a short little dance party in the locker room because we have another day off,” OU head coach Patty Gasso said. “I don’t even know what to do, because having been here, it’s just like chaos. It’s get to your hotel, okay, get your stuff, let’s get ready, look at video, eat fast, eat fast. It’s like that. … Now I’m like, what are we supposed to do? Lay around the hotel? What are we going to do here?”

The Red River rivals squared off in the WCWS for only the second time. Texas (44-20-1) handed the Sooners their first loss of the season in April when the Longhorns beat OU 4-2 to snap OU’s 40-game winning streak, including an NCAA-record 38-game season-opening win streak.

Texas senior transfer Hailey Dolcini went the distance in the upset, limiting OU to just two hits with no walks and three strikeouts. The Sooners equaled those runs and hits against Dolcini on Saturday before Texas even recorded an out in the first inning.

Jayda Coleman led off with a double and Alo jumped on a 1-1 pitch left over the plate for a deep shot beyond the left field fence for a 2-0 lead. The home run was the 30th of the season for Alo and the NCAA-leading 118th of her career. The fifth-year senior is the first player in Division I history with three seasons of 30 or more home runs.

On Friday night, Coleman and Alo talked about having Coleman get on base and Alo hitting her home.

“They’re elite athletes. I have felt that since I recruited them,” Gasso said. “So to have that dynamic duo pretty much start the game, it’s nice that it’s on our side. Jayda has so much energy. She can get on in a lot of different ways. Jocey has so much power. The combination just really sets a great tone.”

Texas got a run back in the bottom half when Alyssa Washington drove an RBI single down the third base line to score Mia Scott.

After giving up the early home run, Dolcini settled in and held OU’s lineup off the scoreboard for the next three innings. But the Sooners are rarely held down long, and they broke through again in the fifth.

Rylie Boone led off with a bunt single and Coleman drove her home with a double to the right-center field wall. Alo followed with a single up the middle to plate Coleman and chase Dolcini. The hit boosted Alo’s batting average to an other-worldly .500 for the season with 75 RBIs.

During OU’s Big 12 series against Texas in Austin this season, Alo was 0 for 6 against Dolcini.

“I definitely think I wasn’t in the right head space down in Austin. I knew that we would meet them again somehow, somewhere,” Alo said. “I prepared a lot for that. But as good as a pitcher Dolcini is, I’m a really good hitter too. I’m going to trust myself. I’m going to pick myself no matter what. I knew the adjustments I had to make, went out there and made them.”

Freshman Sophia Simpson came on in relief for Texas and was immediately greeted with a towering two-run home run by Tiare Jennings into the left field stands on the second pitch she threw for a 6-1 OU lead.

The outburst has become an expected outcome from OU’s deep stable of sluggers. The Sooners have hit a home run in 25 straight games, and 52 of 58 games this season. They have 37 multi-home run games.

Texas senior Janae Jefferson, the Big 12’s all-time career hits leader, continued her postseason power surge with a home run in the bottom half of the frame. The Longhorns stranded seven runners on base and were 1-for-5 with runners in scoring position.

“I think we started to chase, trying too hard, pushing ourselves too much instead of letting the ball come to us,” Texas head coach Mike White said. “Like the ladies said, we didn’t really follow the game plan of seeing the ball down. Good pitchers like Hope Trautwein make you do that. She throws with velocity. She’s effectively wild at times and moves the ball through the zone. It’s a tough thing to do.”

OU senior Hope Trautwein, who entered the game tied for the NCAA lead in ERA (0.51), threw a complete-game six-hitter in her second straight start for the Sooners in OKC. The North Texas transfer had one strikeout and two walks to improve to 20-1.

“I think Hope is kind of on fire right now. She’s really found her comfort zone. I think the matchup was better for us with Hope,” Gasso said. “But we had a plan to bring all kinds of different looks at different times, including Jordy (Bahl). Everybody was all hands on deck. But Hope is just never making me feel it’s time. It was getting close later in the game, but never made me feel ready to do that.”

A second WCWS is scheduled to air on ABC on Sunday at 3 p.m. ET when UCLA plays the loser of Saturday night’s Oklahoma State-Florida game.

“Absolute honor. I think of ABC, maybe nobody even thinks the same way, but to me it is the Wide World of Sports. I’ve been watching it for that long,” Gasso said. “To think that we are in a game on ABC is just a wow factor for me personally. I don’t even talk to our team about it because they don’t watch ABC, they watch Netflix. For me, it was a wow moment.”

While he wished his team could have made it a closer game, White said having college softball on ABC is “another big step for us.”

“Whenever you get someone to come and watch women’s fast pitch, they want to come back. That’s always been the challenge, getting them back,” White said. “Now you walk past a restaurant, you’ll see the game on. People are invested in this game right now, they love it.”

The NCAA’s career home run leader didn’t wait long to add to her total. Alo’s two-run home run in the first inning gave the Sooners a lead they would never surrender. The USA Softball Player of the Year finished 2 for 3 with a home run, walk, two runs scored and three RBIs.

No. 1 Oklahoma plays Monday at Noon ET (ESPN) in the national semifinals against either the winner of the No. 5 UCLA-No. 14 Florida game.

Texas plays Arizona on Sunday at 7 p.m. on ESPN2 in an elimination game.

〈
Previous Article From JC to the WCWS: Old Coaches Proud of OSU's Gajewski, Florida's Walton
Next Article Arizona's Pitchers Forge the Partnership Behind the WCWS's Most Surprising Team
〉