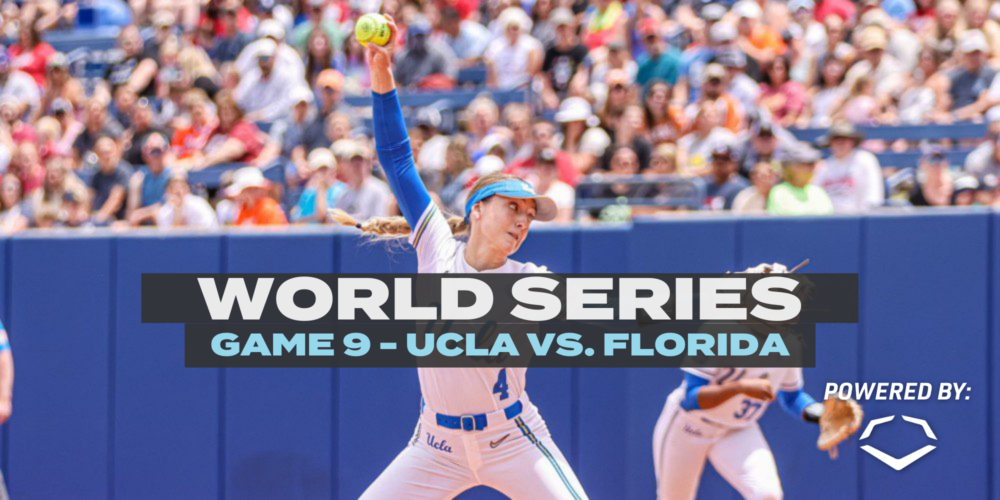 Holly Azevedo could have transferred to another program to become the clear-cut ace of a staff. But the UCLA redshirt senior remained loyal to the Bruins, serving as a dependable arm while All-Americans shined in the spotlight.

Azevedo waited five years to make her first start at the Women’s College World Series, and she was ready for her moment.

Facing potential elimination on Sunday afternoon, Azevedo threw a two-hit shutout as UCLA beat Florida at USA Softball Hall of Fame Stadium in Oklahoma City. Freshman Savannah Pola walked it off for the Bruins to cap a four-run sixth inning with a two-run single to center field.

UCLA (50-9) took advantage of uncharacteristic miscues by Florida (49-19) to eliminate the Gators and advance to the national semifinals against No. 1 Oklahoma on Monday afternoon. UCLA will need to beat Oklahoma twice to reach the championship final.

“It was really incredible, honestly,” said Azevedo, who got doused with water by her teammates in celebration. “I couldn’t do it without the people behind me. Our defense was really, really on point today, and obviously we had a really good outing with offense. So super blessed, and it was a really cool win.”

Florida’s offense was held in check for the second straight game. On Saturday night, the Gators were handcuffed by Oklahoma State All-American Kelly Maxwell and finished with only three hits in a 2-0 loss.

Although the Gators hit a few balls hard, they could never find any holes against Azevedo and her trusty defense.

Florida, which was averaging 6.75 runs per game in the NCAA tournament, was held scoreless in back-to-back games for the first time this season. The Gators were eliminated from the NCAA tournament in the same fashion last season, dropping two games to Georgia in the Super Regional without scoring a run.

UCLA was patient at the plate against Florida senior starter Elizabeth Hightower, elevating her pitch count early with lengthy at-bats.

The Bruins broke through in the second inning to take a 1-0 lead. Pola drew a walk, Anna Vines singled with two outs and Kelli Godin drove a 3-2 pitch to right field for an RBI single.

Trlicek struck out Vines, but a passed ball allowed Vines to reach base. Florida shortstop Skylar Wallace then misplayed a ball from pinch hitter Seneca Curo and Pola scored for a 2-0 UCLA lead. Redshirt senior Bri Perez singled to short to drive in two more unearned runs as Wallace ranged to try and make a play.

Florida went to the bullpen to bring in veteran Natalie Lugo, who struck out Delanie Wisz swinging to finally end the half inning.

But the Bruins continued to put the pressure on Florida and exploded for four more runs in the sixth to end the game early. Maya Brady hit a two-run single through the right side and Pola followed with a two-run single to center to launch the UCLA celebration.

Azevedo arrived in OKC this year with a 62-4 career record and 1.86 career ERA. She’d thrown 432.1 innings, but never threw the first pitch in a WCWS game until facing Florida.

“I’ve said this from the start. She’s so selfless,” UCLA head coach Kelly Inouye-Perez said. “To be able to be behind Megan (Faraimo) and Rachel (Garcia) for her entire career and to come back, to choose to come back into the master’s program to be able to get back, I’m so proud. She’s a hard worker. She is very talented, but she’s selfless.”

Giving her team one more chance to wear the UCLA uniform was Azevedo’s only goal in her milestone win. Mission accomplished.

“It means everything,” Azevedo said. “I’ve spent the last five years with these girls, these coaches, with the university, and just to have an opportunity to go to a school like UCLA with academics and athletics, it’s been truly an honor.”

The loss ended the career of Florida’s Hannah Adams. The fifth-year senior second baseman will leave a lasting legacy in the program. A full-time starter since her freshman season, Adams was a force on offense and defense for the Gators.

She was a Rawlings Gold Glove Award winner this season. Adams is just the second player in program history to earn three all-SEC defensive team accolades at second base, and just the third player in SEC history to achieve the feat. She batted .329 for her career with numerous clutch hits to win games.

“The next kid that wears No. 1 is going to have to be a special, special kid. That’s one of the best college softball players that I’ve been around,” Walton said. “Just the personality and to do what she does with the leather, it’s unbelievable. … and she’s such a great teammate. She just really embraces people in the dugout.”

Adams was glad she could end her career back with one last trip to the WCWS.

“I’m proud of every single person on this team. They’re my best friends,” Adams said. “Coach Walton has been there since my freshman year. He’s turned me into the person and player I am today. I wouldn’t have been able to do it without him. I’m really grateful I got a fifth year here too. I’ve taken in every single moment of this last year.

Katie Kistler is getting good at robbing home runs. The Florida left fielder provided another defensive highlight to add to her collection in the third inning. Kistler perfectly timed her jump to snag the ball off Alyssa Garcia’s bat before it cleared the fence. Kistler had a similar home run-robbing grab earlier this season against LSU.

The redshirt senior was stellar in her first career start in OKC. Azevedo threw a two-hit shutout with two strikeouts and one walk in 6.0 innings to improve to 21-2 this season. She let her defense make plays behind her and never got rattled.

No. 5 UCLA plays No. 1 Oklahoma in the national semifinals on Monday at Noon ET (ESPN)