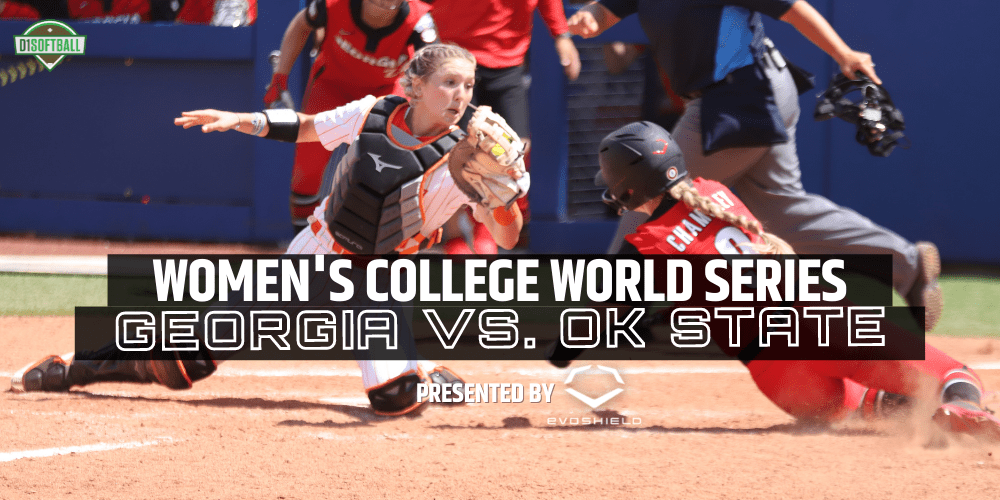 WCWS: No. 5 Oklahoma State Hangs on to Beat Georgia

How it happened: Georgia nearly pulled off the second upset by an unseeded team to cap the early-session doubleheader at Hall of Fame Stadium, but Oklahoma State held off UGA’s seventh-inning comeback attempt.

The Dawgs (34-22) took advantage of an error at first by UGA transfer Alysen Febrey to get the lead runner on base. Jaiden Fields followed by driving a ball up the middle, and after Payden Bordeau grounded out, Ellie Armistead drove an RBI double to right center to close the gap to one run.

With runners still on second and third, Eberle was able to get Savana Sikes to pop out for the second out and Sydney Kuma to ground out for the final out. On the last out, OSU third baseman Sydney Pennington did a great job to corral the in-between hop and Febrey made a great pick to secure the catch.

“It really was just you need one good pitch,” said Eberle, who gave up seven hits and one earned run with two strikeouts and one walk to improve to 26-3. “The second out is the most important. If you can get there, the defense behind you will take it home. I really just tried to focus and hit my spot and make the best pitch I could.”

Febrey drove in the go-ahead run for OSU (48-10) against her former teammates with a single up the middle in the sixth inning to score Kiley Naomi. It was an insurance run the Cowgirls needed by the end.

Mary Wilson Avant (20-11) suffered her first postseason loss after recording all five of UGA’s NCAA wins. She allowed five hits and three earned runs while striking out five with on walks.

“I thought Mary was outstanding all day,” Harris-Champer said. “The way Mary pitched, the way our defense played, we absolutely had an opportunity to get the job done in that game.”

The junior outfielder broke out of a slump to put the Cowgirls on the board early with her two-run home run in the second inning for a 2-0 lead. Factor was 0 for 7 in the Super Regional against Texas. She hadn’t driven in a run since May 14th against Iowa State.

“It’s been no secret. I haven’t been having very good at-bats through supers. My first at-bat wasn’t very good,” Factor said. “That pitch, it was kind of up if I remember correctly. I just decided to swing and not be defensive, and good things happened.”

OSU head coach Kenny Gajewski didn’t like Factor’s swings in her first at-bat and tried to help her flip her mindset to attack mode.

“I decided to put on a run-and-hit, which is kind of like a hit-and-run except I’m trying to get the hitter to be a little bit more aggressive,” he said. “She swung at a ball down. I thought to myself, that swing is the one I want, like that one right there. The next pitch is the one she hit out.”

Key play: OSU right-fielder Haley Busby made a potential game-deciding out in the fifth inning when a single by Payden Bordeau ricocheted off Febrey’s glove at first and into short right-field. Busby took a great approach and came up throwing to nail Sydney Chambley at home with a strong tag by catcher Reagan Wright.

The Cowgirls escaped the inning without surrendering any runs once Armistead grounded out, which loomed even larger after UGA’s late runs.

“That was a huge play. The momentum really could have shifted there. But she shut it down,” Eberle said. “That’s what you need, what you’re asking for from her. She even had a great throw later in the game, that a little bit earlier she probably would have gunned another one out.

Harris-Champer had some misgivings about how the Dawgs decided to try and let Chambley score.

“I thought we had a chance to get to the plate when the ball got kind of past the second baseman,” Harris-Champer said. “I was sending her, but when I turned around, she was coming back at me. I didn’t have time to reel her back in. I have to be able to get in a position where she can see me better so we don’t have that mishap.”

Next Up: Oklahoma State plays JMU on Friday at 7 p.m. ET (ESPNU). Georgia plays No. 1 Oklahoma on Saturday at noon ET (ESPN).