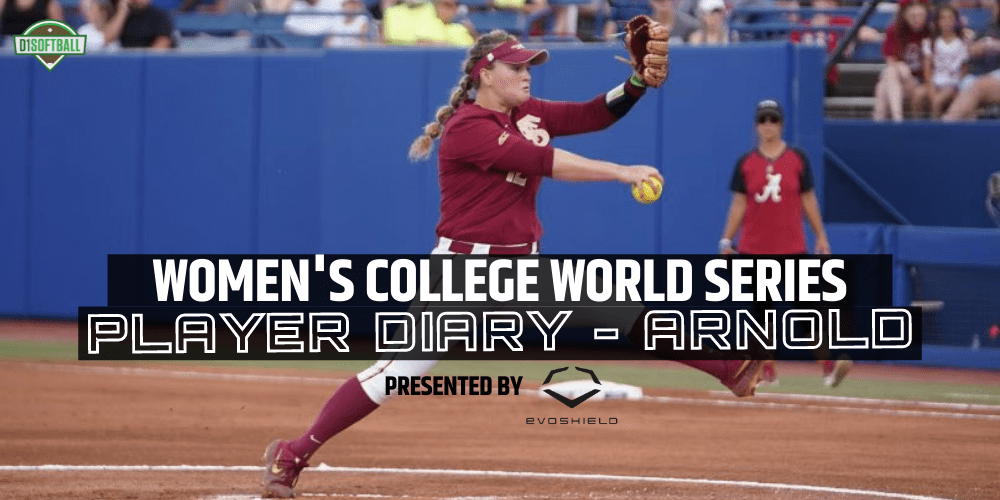 OKLAHOMA CITY – Whether it’s their first time participating in the Women’s College World Series or a return trip to the sport’s biggest stage, players never take any moment for granted.

Being able to experience the event through their eyes is what I was hoping to achieve in asking teams to have players write daily diary entries during the championship run.

Florida State redshirt senior pitcher Caylan Arnold and her teammates have navigated weather delays, sleep deprivation and four elimination games to reach tonight’s championship series against No. 1 Oklahoma. It’s the first time in WCWS history that two teams have lost their opening games and come through the loser’s bracket to reach the championship round.

Arnold details what it took to get there the last few days:

Saturday was like most normal game days for us. We woke up, got breakfast (no Starbucks for me this morning I decided to sleep in a little), and hung out around the hotel until time for scouting and lunch. After that, we left for the stadium and got super hyped up on the bus thanks to DJ Anna Shelnutt. We played Arizona and won!! It was such a crazy game but nothing compared to the Oklahoma State game that started at midnight. Most of us were drinking coffee before the game to help us stay awake, and I think it paid off because we won that game too! We didn’t get back to the hotel until around 3 am 😩 and we were so worn out! I took a quick shower and tried to go to sleep as soon as possible because I had covid testing this morning at 9:45. Following covid testing, I was still so tired so I tried to go back to sleep until lunch/scouting at 12:45. I woke up at 12 so that I could get treatment on my pitching arm before the game. After scouting, we left and arrived at the stadium to play our first game against Alabama. After the first inning, it started raining and there was lighting in the area so we got put on a rain delay for a few hours. Some girls tried to nap, some played games and some just chilled in the locker room. Our amazing dietitian got us Smoothie King so that we weren’t hungry when the game finally started. I pitched 4.2 innings and had the best time! Pitching at the World Series is so much fun!! We won the game 2-0 and we will play the second game tomorrow night! Thankfully, we get to sleep in!

I woke up at 10 this morning to get ready to go to a facility that does cryotherapy for athletes. Let’s just say it was SO COLD! But it was really funny watching everyone freeze to death in the cold tanks. After that, we came back to the hotel to eat and get ready for the game. I got a little extra treatment on my shoulder and took a quick nap after lunch and before scouting. Following scouting, we loaded the bus and headed to the stadium. We got to watch a little bit of the OU vs. JMU game and holy cow we shed a few tears when Odicci (Alexander) was pulled. What an amazing athlete she is! I’m so glad that JMU made the run that they did, and Odicci has inspired so many people with her story. Soon after, we warmed up and began getting ready for our game. I was so nervous and so excited at the same time! We came out punching and put up 8 runs in the first three innings!! We were fired up! But Alabama wasn’t going down easy and they fought and played a great game. I’m so in shock that we’re playing in the championship series!! What a way to go out as a senior. I’m so blessed.