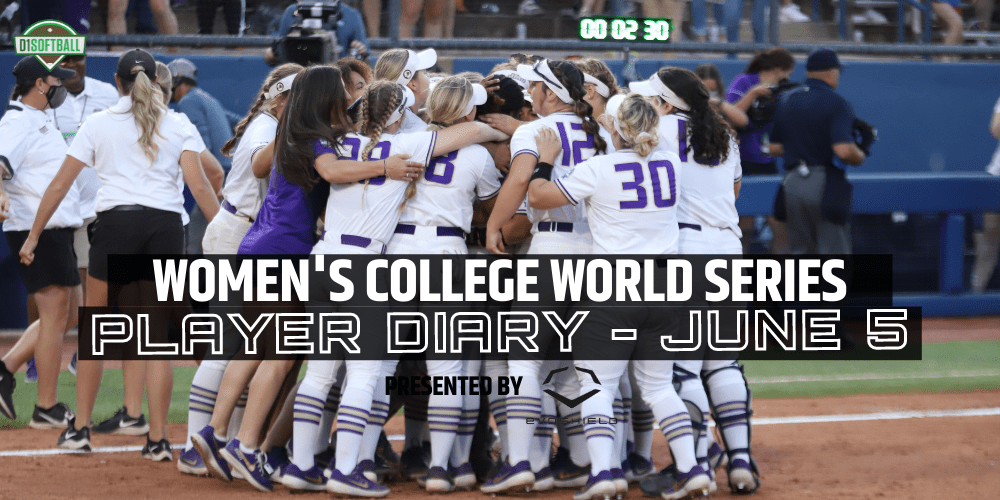 OKLAHOMA CITY – Whether it’s their first time participating in the Women’s College World Series or a return trip to the sport’s biggest stage, players never take any moment for granted.

Being able to experience the event through their eyes is what I was hoping to achieve in asking teams to have players write daily diary entries during the championship run.

From the hotel to the dugout to the media appearances, players will be providing behind-the-scenes access to all the action.

Following the thrilling wins on Friday night that featured Odicci Alexander’s diving tag to help JMU beat Oklahoma State and Alabama’s Montana Fouts throwing a perfect game on her 21st birthday to take down UCLA, two of their teammates checked in along with a player that got some needed rest:

It’s such a hard thing to put into words what this Women’s College World Series has meant to not only me but my fellow seniors on the JMU team. We knew this team was capable of making it this far but there’s a difference between being able to do something and actually making it happen. I remember when I was little and the WCWS was a far out dream that only few have the ability to achieve. So really I’m proud that I could achieve that dream for my little kid self. I really want to soak in this moment as it is a once-in-a-lifetime moment and my last year playing the game that I love.

This game has given me so much more than I could have ever thought when I first picked up a softball at 5 years old, so to be on this field with this audience and with these girls is an indescribable feeling. The grit and determination that we have shown thus far is exactly what this team wants to be remembered for. Did we have the easiest road to get here? No! But did we fight to be here and make a name for ourselves? Absolutely. It is a privilege to play with these fellow teammates as well as play against other talented collegiate athletes. Our goal is to take it to the end as well as put James Madison on the softball map for years to come! GO DUKES!

Going to the World Series is like going to Disney World, except for softball. It’s the dream that gets planted in every young softball player from the first time they see it on TV. How could you not fall in love with it? It looks absolutely magical. Then imagine .. the next moment you are there .. and the girl on TV? That’s you.

In 2012, I was 15 and remember watching my favorite player, Kayla Braud, lead off for Alabama. Watching them win the national championship that year, the energy and fun they had doing it, made me fall in love with Alabama softball. I dreamed of being in those girls shoes. Nine years later, I am exactly there and every moment has been surreal. Every single one of us has been soaking up and enjoying every moment we’ve been here.

That’s something that’s been different about this experience at the World Series for me and for this team. In the two other years when I had been to the World Series, I think I found myself so focused and stressed on my performance and winning, that I missed the moments. We have celebrated and soaked up the little moments of taking the big charter plane that we had all to ourselves on the way here, the ESPN photo shoot, shopping at the mall on our off days, getting some super cool Alabama swag bags, celebrating Montana’s birthday, practicing, and most importantly, each and every single one of our successes.

I think through the fun and enjoying each other and the experience, it has lead to us be able to play the best we ever have.

Yesterday may have been my favorite day of my 20 years of softball ever. Have you ever woke up and known it was going to be a special day? Not only did I, but all of us woke up with that feeling. First off, it was my best friend and teammate Montana Fouts’ birthday.  While some may have been nervous or not wanted the stress of playing UCLA on their birthday, Montana was the opposite. Being her roommate, I know that she knew that God’s best birthday present to her was the opportunity to play UCLA on her birthday. She wasn’t scared at all, she was so incredibly excited for the opportunity. We all could feel this. Since we didn’t play until 8:30 at night, we wanted to make sure her 21st birthday felt as normal and celebrated as possible. We threw her a little surprise party and showered her with as much love and happiness as possible. After we went up and got ready and came back down for our pre-game meal, you could feel that the vibe had changed, and that the team was focused and ready for game time. We knew it wasn’t going to be easy and that it was going to be a pretty even match up. We also all still had the 7-0 loss a little over a year ago in Clearwater, Florida very much still in our memory. However, we knew how much of a different team and different players we were from then. That’s what made the opportunity so special. All the adversity we had gone through as a team, all the struggles from the last two years… we knew that was our strength.

Through warm-ups we were focused, but the second we got on the field it was all fun. While we were determined, we were having so much fun in every moment. I remember taking a second while I stood on second base in the first inning, and thinking I really felt like I was at Disney World with my best friends. Through the whole game we continued to play pressure-free and celebrating every success we had. It went by so fast, and when I looked up it was already the 7th inning! I remember being in the outfield and knew Montana was throwing a no-hitter, but it took me until there was two outs to realize that she had been throwing a perfect game. I knew how much she had prayed about this opportunity to play this exact game. I remember thinking everything she had overcame, and seeing in that moment that it was all part of  God’s plan. It was impossible for it not to be. There was absolutely no way if the ball was getting hit anywhere near me that it was dropping. I didn’t care if I had to climb or jump over the fence… a perfect game on your birthday against the team you’ve wanted to play most ?!? Next thing I knew the ball was hit first pitch over my head in the gap. All I could think was doing it for Montana and that there was no way it was dropping. It was the most incredible game I’ve ever been a part of and the celebration after is one that I will never forget.

Being at the World Series is magical, it is the Disney World of softball. Every single party I didn’t go to, school dance I missed, and extra work I ever had done was more than worth it to experience the extraordinary, and magic of the World Series. The memories and moments with my best friends, my teammates are ones that I will never forget for the rest of my life. The best part is? The most magic and the best of them are still yet to come.

We had Friday off so I met with my family and we went to the National Cowboy & Western Heritage Museum! It was really interesting and I’m glad I get to spend time with my family while we are here. After that we went and ate at Ted’s Cantina and it was so good! The food was really fresh and I highly recommend going if you’re ever in OKC.

After that, I went back to the hotel and we watched film with Coach (Alameda) to prepare for Arizona. I’m excited because I know my team is ready to come out and fight. We had a team meeting at 9:45 in the morning so I went to bed early to rest up for the game.

After an off day yesterday, our team was rested up and ready to compete today at Hall of Fame Stadium.

Our team arrived at the stadium for batting practice and then we took to the main field once the game before us finished. We fought hard against Florida State but ultimately fell short. This season has been so incredible and I wouldn’t of wanted to have this experience with any other group of people! Thank you Wildcat Nation, and Bear Down!