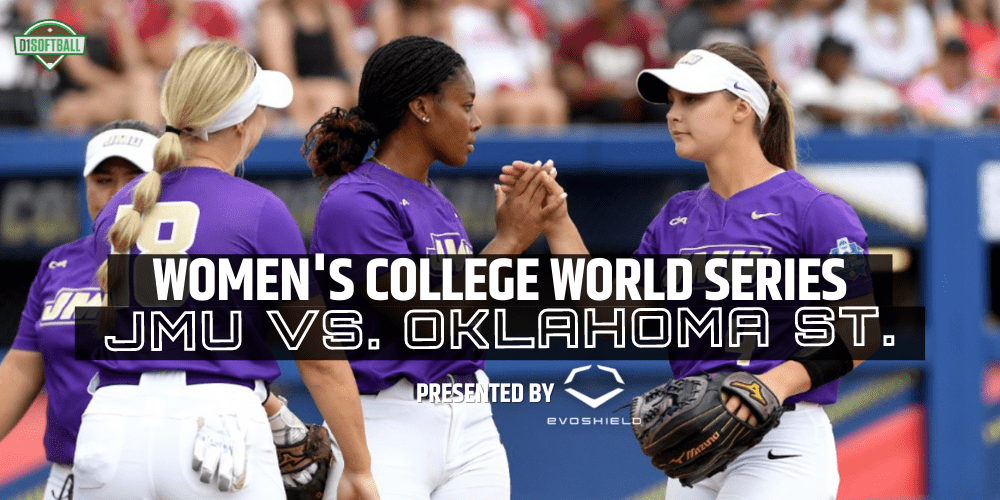 The JMU train just keeps magically rolling along through the postseason.

One day after beating No. 1 seed Oklahoma, the Dukes dispatched the state’s other major program by taking down No. 5 Oklahoma State 2-1 in front of a sellout crowd on Friday night at USA Softball Hall of Fame Stadium.

JMU (41-2) – making its first appearance in the Women’s College World Series – is the first unseeded team to win its first two games in the event’s history.

JMU redshirt senior pitcher Odicci Alexander added to her legacy with a potential game-saving defensive play for the Dukes in the seventh inning. Leading by a run with one out and runners on second and third, Alexander fielded a squeeze bunt and lunged Superwoman-style to tag out OSU pinch runner Scotland David before she crossed home plate.

“If that’s not Top 10 SportsCenter, I don’t know what is,” JMU head coach Loren LaPorte said. “Because that’s probably the best play I’ve ever seen in a career by a pitcher in that situation with that much pressure, and she’s tired.”

Alexander said she just let her athletic instinct take over once she saw OSU’s Chelsea Alexander lay down the squeeze.

“It was a tough situation. Runners were at second and third and I kind of knew they were going to do something like that,” Alexander said. “So just being focused, I kind of saw her in my peripheral and I really didn’t have time to flip it to Lauren (Bernett), so I just went for it.”

Alexander (18-1) was shaken up on the play, but stayed in the game and induced a fly out to secure yet another upset for JMU.

“I mean, that was fight. I just got that big out. I wasn’t letting up then,” she said. “I was just ready to get the third one and be done and just win the ball game.”

JMU took advantage of a walk, a base hit and a throwing error by OSU starting pitcher Carrie Eberle to plate the first run in the first inning.

Kate Gordon’s offensive breakout at the WCWS continued. One day after snapping an 0 for 13 slump with a game-winning home run against Oklahoma, the redshirt senior went yard again in the third inning with a ball that flew out of the park fast for a 2-0 lead.

The Cowgirls (48-11) narrowed the deficit to one run in the fifth inning on an RBI single by Chelsea Alexander that scored Reagan Wright from second. The throw beat Wright to the plate, but JMU catcher Lauren Bernett couldn’t corral the ball on the hop.

After surrendering back-to-back hits to open the bottom of the fifth, Eberle (26-4) was pulled for Kelly Maxwell. The lefty erased the threat and struck out five of the six batters she faced.

That’s when things got a bit wild in the seventh.

Karli Petty led off the inning by taking a ball off the helmet. David, OSU’s pinch runner, stole second and then got caught in a rundown between second and third. David was tagged out, but was ruled safe on an obstruction call, placing runners at second and third with no outs.

After Avery Hobson fouled out, Odicci Alexander provided another heroic moment in a season filled with them for a JMU team that has captured the nation’s imagination.

“Well, she’s a crazy athlete,” OSU head coach Kenny Gajewski said. “I watched it over and over again. Just credit her for doing what athletes do. Doing what big-time players do. They just make plays. “

The redshirt senior pitcher threw a three-hitter, allowing one earned run with two strikeouts and two walks. The outing was rather economical by her standards, finishing off OSU in 95 pitches.

Add in her amazing defensive play and it’s easy to see why teammates follow her lead on the field.

“Looking over to my left and seeing her composed, seeing her relaxed, cool, calm, and collected really helps,” JMU third baseman Lynsey Meeks said. “It gives you confidence. You know she’s giving you her best, so you want to go out, make plays, and do your best for her. It definitely slows the heart rate and helps you make big plays.”

The 4-foot-11 third baseman made a diving stop to her left and threw the ball from her knees across the diamond for the out at first.

“A lot of it was reaction,” Meeks said. “The ball kind of had gotten behind me, so I knew I wasn’t going to be able to get up on my feet and throw, so I just reared back and threw it as hard as I could and (Hannah Shifflett) did a great job stretching for it. I wouldn’t have been able to do it without her.”

Day of rest: By advancing to the semifinals on Sunday, JMU gets a needed day off on Saturday to rest and recover before returning to the field.

“I’m telling you, we’re celebrating this win tonight, and then tomorrow we wake up and it’s a new day,” LaPorte said. “… It’s important that they do celebrate this and we don’t move too soon because this is very special and I want them to remember every second of these wins. But when we wake up in the morning, we’re going to take care of our bodies. We are going to rest and we’re going to do a lot of treatment and watch film again and be ready for Sunday.”

The Dukes have been so focused on each game they didn’t realize they were already in the semifinal with two wins.

“Maybe I was out of the loop on that one. But it is undescribable, this feeling, how far we have taken it, how far we have gone, and I think it just speaks to our program,” Meeks said. “All the hard work that we have put in in the off-season, it’s finally showing and I couldn’t be more proud of these girls and what we’re accomplishing out on this big stage.”

Next Up: JMU advances to the semifinals and plays on Sunday at 1 p.m. ET. Oklahoma State plays either Arizona or Florida State on Saturday at 9:30 p.m. ET (ESPN).

Rhiannon Potkey
wpDiscuz
You are going to send email to