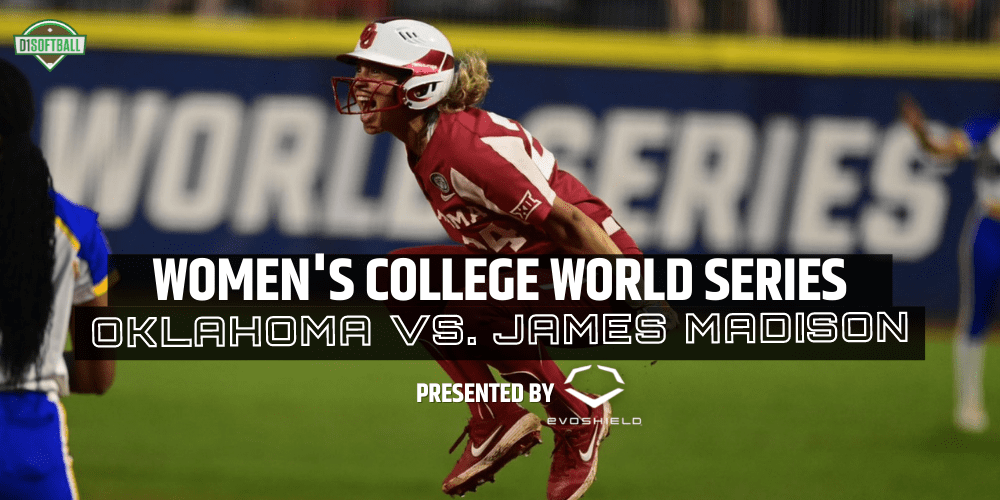 What it means: Oklahoma and JMU will meet on Monday at 4 p.m. ET (ESPN) with the winner advancing to the best-of-three championship series against either No. 3 Alabama or No. 10 Florida State. (*game time has been updated after a weather delay for the second semifinal)

How it happened: Tiare Jennings started things off with a bang for the Sooners and finished with one as well.

The freshman led off the national semifinal on Sunday afternoon with a home run and came through in the clutch in the seventh inning by driving in the game-winning run to deliver JMU its first loss in the double-elimination format.

The game was a rematch of the Women’s College World Series opener on Thursday, when JMU upset the Sooners 4-3 in eight innings. Since then, OU has clawed its way back through the losers bracket with three elimination game wins.

Jennings homered over the centerfield wall on the fourth pitch of the game from JMU ace Odicci Alexander to give OU a 1-0 lead. A sacrifice fly by Jana Johns and an RBI triple by Nicole Mendes expanded the OU advantage to 3-0 by the fourth.

Sara Jubas needed only one swing of the bat to get JMU back in the game. The redshirt junior hit a three-run home run over the left-center fence in the bottom of the fourth to pull the Dukes even 3-3. The rally started with the help of an OU error and a walk and knocked OU starter Shannon Saile from the game.

Rylie Boone put Jennings in position to come through with the game-winning hit. She led off the seventh with a bunt single and scored as Jennings’ double to right-center was slightly bobbled.

“I knew when I went to the plate that I had to do whatever I had to do to move her over and that Jocelyn (Alo) or Kinzie would bring her home. That was my game plan,” Jennings said. “And seeing her on first just fired me up and kind of hyped me up to do what I did. So definitely started the momentum for the whole entire lineup.”

A few defensive miscues in the bottom of the seventh put the OU lead in peril. But with runners on second and third and fans on their feet at full throttle, OU freshman Nicole May struck out Lynsey Meeks swinging on a full count.

JMU (41-3), the first unseeded team to win its first two games in WCWS history, stranded nine runners on base and were 1 for 8 with runners in scoring position. Alexander suffered her second loss of the postseason, giving up seven hits and six earned runs with four strikeouts and three walks.

“Honestly, I was so happy with that effort in that game,” JMU head coach Loren LaPorte said. “I feel like we were right in it the entire time. And it’s just like it goes back to when we were at Missouri (in the Super Regional); they won that battle but the war’s not over. So that kind of same mindset that we had when we dropped Game 2 at Missouri, just bouncing back, staying together, playing with nothing to lose.”

The freshman provided OU with some early juice by leading off the game with a home run. She came through in the clutch in the seventh inning with an RBI double that drove in the game-winning run.

Hansen laid out to secure a foul out behind the plate in the fourth inning, and Coleman sprawled for a diving catch in centerfield in the sixth inning.

“That’s the one play that I think I dream about,” Hansen said. “When I go to bed at night I dream about the pop-ups behind the plate that I get to lay out and dive for. I used to do that exact play at catching lessons every single night over at Jen (Schroeder’s). So when it happened I thought immediately of her and I was, like, I’ve been training for that my whole life.”

Planning ahead: It may just have been a helpful reminder for fans, or it may have been a display of confidence.

Before the first game had been completed, the OU athletic website already listed the “if necessary” game on the schedule without any notation that it was in fact “if necessary.”

Next Up: Oklahoma and JMU meet on Monday at 4 p.m. ET (ESPN) for the right to play in the national championship series.

“We’re ready to battle. We’re all in it. We are as excited as we can get,” Jennings said. “We’re going to get after it. We’re super excited.”