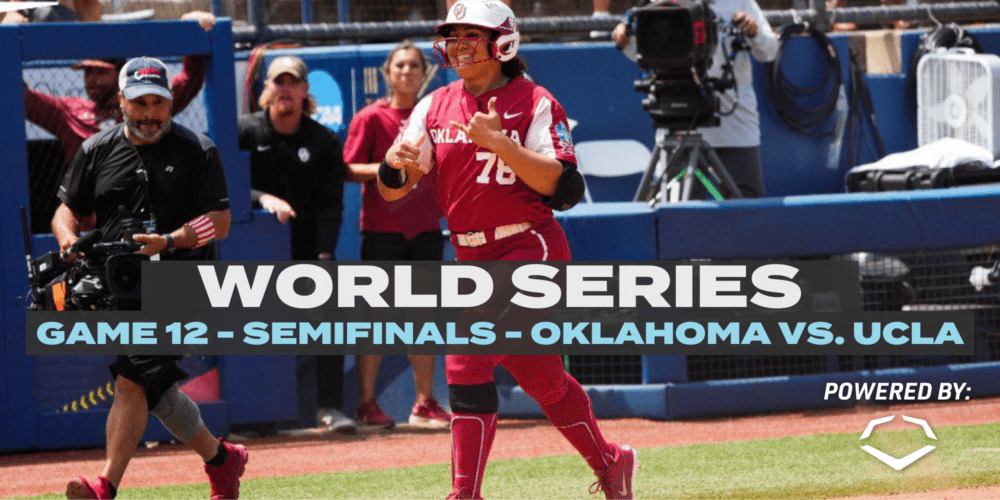 Oklahoma doesn’t lose very often, but the Sooners sure know how to respond when they do.

Backs against the wall after a loss to UCLA in the first game of the Women’s College World Series semifinal on Monday afternoon, Oklahoma came out swinging in the quick rematch.

Jocelyn Alo hit two more home runs, including a grand slam, and Hope Trautwein threw a two-hit shutout as the defending champion Sooners run-ruled UCLA to advance to the championship series for the third straight season and seventh time in 10 years.

“I went into that game with all the confidence knowing we would walk out of it with the W. No one beats us — no one beats the Sooners twice,” Alo said. “I think we really just stuck to our game plan and kind of zoned in on what it was that we needed to do.”

The Sooners (57-3) will have to get through a conference rival in pursuit of the program’s sixth NCAA title. OU will play Texas in the all-Big 12 Red River Rivalry championship series, beginning on Wednesday at 8:30 p.m. ET (ESPN). Texas handed OU its first loss of the season in April to snap a record winning streak, but OU beat the Longhorns 7-2 last Saturday in the WCWS.

UCLA (57-10) joined Texas in the exclusive group of teams to beat OU by outslugging the Sooners in the first game of the semifinal. Maya Brady hit two home runs in the 7-3 win to keep UCLA’s season alive.

But OU quickly flushed the result and returned to form.

The Sooners started Trautwein, the redshirt senior transfer who had registered OU’s previous two wins in the WCWS.

The Sooners gave Trautwein a 3-0 lead after only three batters. Jayda Coleman led off the first inning with a walk, Jocelyn Alo doubled to right center and Tiare Jennings belted a 3-run home run against UCLA starter Holly Azevedo.

Azevedo lasted only a few more batters as Megan Faraimo replaced the redshirt senior in the second inning with two on and no outs. But the results were the same.

NCAA home run leader Jocelyn Alo blasted a three-run shot deep into the stands in left field to increase the OU lead to 6-0.

But that was just the appetizer for the redshirt senior.

She belted a grand slam to left center as part of an eight-run fifth inning that ballooned OU’s lead to 15-0. The home runs increased Alo’s record career total to 120 and season total to 32.

The Sooners have hit a home run in 27 straight games, and 54 of 60 games this season. They have 38 multi-home run games.

Trautwein (21-1) induced a deep fly to secure OU’s program-record 40th run-rule win of the season. Trautwein transferred to Oklahoma from North Texas this season for a shot at winning her first NCAA title.

Facing a UCLA lineup that gave the Sooners trouble in the opener, she tried not to focus on the potential season-ending stakes.

“Stick to my routine. That’s something I’ve been working on for a long time, pretty much the whole postseason now,” Trautwein said. “Also just treating it like another game. There’s no reason to psych myself out or any of the girls out by treating it like it’s a special game that we have to win.”

Although it required staying on the field for an extra five innings, OU head coach Patty Gasso was pleased with the entire day’s outcome. Along with Trautwein’s performance and the team’s response to a loss, freshman pitcher Jordy Bahl got her first extended work in the opener after missing nearly a month with forearm soreness.

“As strange as this might sound, the second game was a blessing for us because of that,” Gasso said. “To see Hope in that environment, to see Jordy and what she can do for us, and to see our team bow up and step up and say we’re not going home, that was important. Especially against a team like UCLA. They are so — they are very dangerous.”

What seemed like a preordained rite of passage long before the first pitch was ever thrown this season is now official. OU is back in the WCWS championship series.

End of the Road

Given all the injuries and lineup changes UCLA endured this season, head coach Kelly Inouye-Perez was proud of the way her program competed to get back to OKC. The Bruins didn’t have as much star power as previous teams, but they worked well as an entire unit.

“I think I credit my coaches for finding different ways to find ways to win,” Inouye-Perez said. “We weren’t as loaded as we’ve been in the past. Last year we had a roster that I think you could have looked at and said it’s over just by the names on it, but this year we didn’t.”

Brady choked up when asked about what UCLA’s seniors have meant to the program.

“This senior class, since I have kind of stepped foot on campus, has just been probably some of the biggest role models that I think that I’ve had softball-wise and in life,” the redshirt sophomore said. “They’re amazing softball players, but the people that they are off the field is just incredible, and I’m going to miss them a lot personally.”

The teams were launching balls out of the stadium. Home runs accounted for 20 of the 25 runs scored in the semifinal doubleheader, including the first 16 runs.

Oklahoma finished with five home runs and UCLA had three.

Oklahoma has not suffered back-to-back losses since February of 2020 when Washington and Wisconsin beat the Sooners at the Mary Nutter Collegiate Classic.

The last time OU suffered back-to-back losses on the same day was in February of 2016 against Washington and Minnesota in the first two games of the season.

The NCAA career home run leader belted two more to finish with a WCWS record-tying seven RBIs. Alo hit a three-run home run, a grand slam and a double. She finished 4 for 4 with three runs scored. Alo moved to No. 3 on the NCAA all-time RBI list with 317.

“I think Jocelyn Alo is a big reason why this sport has gone to another level. People come here to watch her like she’s Babe Ruth. They pay to see Jocelyn Alo.” – Gasso

No. 1 Oklahoma will play Texas in an all-Big 12 WCWS best-of-three championship series, beginning on Wednesday at 8:30 p.m. ET (ESPN).