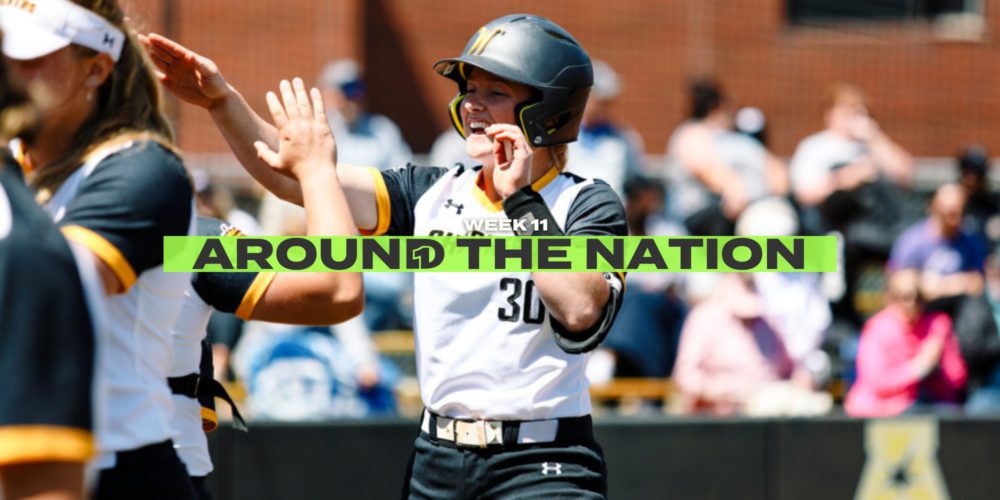 Around the Nation: College Softball Beyond the Power 5

This is normally where we talk about every team beyond the Power 5 wanting to be this season’s James Madison. It’s hundreds of teams dreaming of a postseason run that people will never forget, just like the Dukes a season ago. But right now, more than wanting to take their place, the entire college softball community wants to be there for James Madison and all of those who lost a friend and teammate with the sudden passing of sophomore Lauren Bernett at just 20 years old.

We carry on this week with Around the Nation, the weekly look at softball excellence beyond the ACC, Big 12, Big Ten, Pac-12 and SEC. It feels a little strange, to be honest. And we do so with a heavy heart, knowing what happens on the field is never really the most important part of the story.

But for a sport that we at D1Softball love right along with you, the fans, players and parents, this space is our small attempt to shine as bright a light as possible each week on all of those who find some measure of joy and peace between the lines. Softball wouldn’t be the same without them. It won’t be the same without Lauren Bernett.

Player of the Week: Addison Barnard, OF, Wichita State

We’re going to get into the historically unprecedented nature of her numbers momentarily, but you don’t need the context to know Barnard had an amazing week. In sweeping a midweek game against Kansas and a midweek series against Memphis, the Shockers outfielder went 8-for-12 with 15 RBIs, six home runs, a double and a stolen base. Going beyond the week, she has six consecutive games of at least two hits and eight home runs in the past five games.

As we keep pointing out in this space, the games Perez and LMU play come with higher stakes than for most teams. The WCC regular season champion gets the automatic bid, and LMU can’t rely on an at-large bid otherwise. So when Perez earns all three wins in a sweep of Pacific, two as a starter and one out of the bullpen, we take note. We also notice no-hitters with 14 strikeouts, and she had one of those, too. Her line for the week: 17 IP, 2 H, 0 ER, 31 K.

Why do so many good pitchers emerge from Virginia, and why have so few, historically, ended up in Charlottesville? A question for another day perhaps. Presbyterian is happy Hess ended up in Clinton, South Carolina. The Blue Hose are only a game behind USC Upstate in the Big South, thanks in part to Hess striking out 21 batters in 14 innings in the circle and going 7-for-13 with three home runs and eight RBIs at the plate last week.

What we learned last week

Addison Barnard didn’t appreciate the snub. Forget USA Softball voters not including Barnard among this year’s top 25 players. It’s difficult to leave her off a list of the 25 best seasons in NCAA history.

Wichita State asked the following question after she hit an inside-the-park home run against Memphis — her fourth home run of the series and sixth of the week. So let’s look for an answer.

Barnard now leads the nation with 26 home runs, five ahead of anyone else. She also has 25 steals, comfortably in the top 30 nationally. Obviously, she is without a power-speed peer at the moment – Northwestern’s Rachel Lewis is closest and having a hell of a season, but 19 home runs and 18 steals aren’t 26/25. What about if we open the history books?

Below you’ll find the Division I single-season home run leaders, a list Barnard will join with her next home run. And the answer to Wichita State’s original question? No one has that combo. Ever.

UNCG can slug. Much has rightly been made of Duke’s slugging prowess this season, as the new program attempts to mount a World Series run. But the Blue Devils aren’t even the prolific power hitting team in North Carolina. As the week began, UNCG held that distinction. It ranked sixth in the nation at 1.95 home runs per game, one spot ahead of the ACC team from Durham. And from total power numbers, UNCG has an opportunity to do something that few mid-majors ever have.

A year ago, Oklahoma (161) broke Hawaii’s single-season home run record (158) that had stood for more than a decade. But Hawaii was always an outlier. Of the 10 most prolific home run seasons, eight came from Power 5 programs. Of the 20 most prolific seasons, only four came from programs beyond the Power 5. And two of those were Louisiana efforts — World Series regulars, the Ragin’ Cajuns have rarely been your prototypical mid-major.

UNCG has seven regular season games remaining, followed by the Southern Conference tournament. Win that and reach an NCAA regional, and it’s at least five more games. At the current rate, that would mean 23 more home runs and 111 for the season – good enough to join Hawaii and Louisiana as the only “outsiders” in the all-time top 10.

Obviously, we just went through a bunch of “ifs” to get to that scenario. But it’s in play. The larger point is that with four players already in double digits, and two more at nine home runs, the Spartans are in the midst of a remarkable offensive season. And a program that has won four consecutive SoCon regular season titles appears to only be getting better.

Miami is going to flummox the selection committee. Spoiler alert: everything just said about UNCG? It also applies to Miami. The Redhawks have played fewer games than UNCG thus far, but they have more scheduled games remaining. And at 2.08 home runs per game, third in the nation, they are even more prolific. As Cal learned the hard way this past weekend.

Given the rare opportunity to host a former national champion for a full three-game series, Miami hit seven home runs en route to a 2-0-1 weekend (Sunday’s finale was abandoned at 8-8 due to travel-related time constraints – it’s a long way from Berkeley to Oxford, Ohio).

After winning the opener with a home run, Miami hit four home runs in the seventh inning alone during the second game. They scored six runs in that inning, Karli Spaid’s walk-off home run punctuating the comeback in a 7-6 victory. And when we say “punctuating,” well, the spike says it all.

In the past month and a half, Miami has two wins and a tie against Cal and wins against Kentucky and at Michigan. The MAC team also held its own in a 4-2 loss at Alabama and a 7-6 loss against Texas at that same tournament in Tuscaloosa (to be fair, they were also routed by the Tide and Longhorns that weekend).

For all of that, Miami was still No. 73 in the most recent adjusted RPI. And if not completely unprecedented, a team in the 70s receiving an at-large NCAA bid would be generationally rare. But a 4-6 record against the RPI top 50 compares very favorably with the normal bubble range.

Miami, of course, can render all of this moot by winning the MAC tournament and earning an automatic bid. But the MAC tournament is famously unpredictable (imagine running into Bowling Green’s Peyton Gottshall with win-or-go-home stakes).

Murray State’s Logan Braundmeier doubles her fun. Our tour of Midwestern power hitters continues with one more encounter with the NCAA record book. In this case, for someone who makes more use of the gap than the fence. In helping her team maintain a share of the lead in the Ohio Valley, Braundmeier went 7-for-12 with two home runs and a double. Only the ratio of extra-base hits is surprising because Braundmeier has 22 doubles in 44 games (she’s hitting .404). She’s three doubles away from joining a logjam of players tied for 18th in Division I history.

Given Murray State’s postseason potential, there’s even an outside chance she could make a run at the single-season record of 29 doubles, shared by former Fresno State standout Nina Lindenberg and current Florida State star Sydney Sherrill. It’s a remarkable final season for someone who has been a reliable starter for Murray State almost from the get-go but who had just 22 doubles in 167 games entering this season

What to watch this week

Sacramento State at Weber State: First place in the Big Sky is on the line in Ogden, Utah. Weber State retains at least a share of the lead if it wins one of three, while Sacramento State can leapfrog the Wildcats with a sweep. Weber State leaned on Chloe Camarero for runs early in the season, but the entire lineup is crushing Big Sky pitching (.338/.515/.432 slash line). On the other side of the field, Sacramento State is second in conference games in ERA. Marissa Bertuccio leads the Big Sky with a 1.20 ERA in 52.1 conference innings.

Robert Morris at Oakland: After losing a series to Cleveland State a week ago, Oakland’s hold on first place in the Horizon League is tenuous. Robert Morris need only win this series to pass the Grizzlies (although Cleveland State could pass both to claim first place, depending on how events unfold). RMU’s Dana Vatakis has been effective in conference games (5-2, 2.13 ERA), so it’s another compelling pitching matchup for Oakland’s Sydney Campbell (10-1, 0.95 ERA).

Boise State at Utah State: Both teams would like to catch San Diego State in the  Mountain West. But as two of the teams currently in a three-way tie behind the Aztecs, one of them will be out of the race after this series. In reality, even the winner may need a sweep to keep its title hopes alive. Once on the cusp of the Top 25, Boise State’s run production has faltered badly in conference play. Indeed, even a .282 batting average and .484 slugging in MWC games is a poor indication of overall team performance. Kelsey Lalor is singlehandedly propping up the lineup at the moment. She has more than 25 percent of the team’s extra-base hits in MWC games, including nearly half its home runs, and better than 25 percent of its RBIs.

Troy at Texas State: Louisiana is running away with the Sun Belt, but this is an important series between teams hoping to extend the conference’s history of multiple NCAA bids. Texas State has turned its season around, winning nine in a row to pull level with Troy in third place (13-8). Troy ace Leanna Johnson (9-4, 1.57 ERA) has pitched 64 percent of her team’s innings in conference, while Texas State ace Jessica Mullins (12-4, 1.48 ERA) has pitched 69 percent.