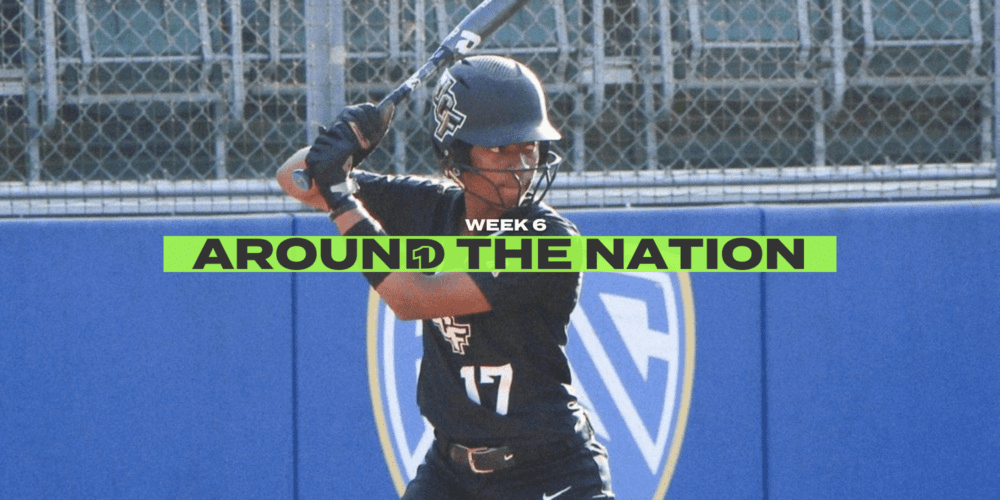 Every team wants to be this season’s James Madison, including James Madison. Last season’s sensation, the Colonial Athletic Association powerhouse, followed Odicci Alexander to the cusp of the championship series in Oklahoma City. The Power 5 (ACC, Big 12, Big Ten, Pac-12 and SEC) may eat up most of the World Series bids, but they’re far from the only show in town. Check in each week with the rest of the nation, the conferences also dreaming of the WCWS. Just don’t call them mid-majors.

(All results and statistics through Tuesday, March 22)

Player of the Week: Alexa Williams, OF, George Washington

We’ll get to what it means for the team, but all Williams did in George Washington’s first two A-10 series this past week was go for 7-for-16 with five home runs, a double, 12 RBIs and nine runs scored. That accounted for more than a quarter of the team’s total bases and almost half its RBIs in six wins.

Princeton finally played its first Ivy League games since 2019, but it’s going to be a longer wait for Laudenslager to give up her first Ivy League hit. The junior’s work this past week consisted of 11 no-hit innings and 17 strikeouts in a weekend sweep of Brown.

Freshman of the Week: Grace Loftin, OF, UNC Greensboro

SoCon pitchers aren’t looking forward to meeting Loftin. While UNCG didn’t have the greatest week collectively, losing two of three at Elon, Loftin aced her final exam before SoCon play gets underway. Between Elon and a midweek win at previously imposing Charlotte, the freshmen went 8-for-15 with seven RBIs. Her handiwork included four doubles (three of them in one game against the Phoenix) and a home run. She lifted her average from .300 to .347 in a week.

What we learned last week

Jada Cody may make a run at the century mark. UCF’s star isn’t likely to match Laura Espinoza’s NCAA single-season record of 128 RBIs, but that’s about the only mark that’s out of reach for the breakout sophomore star who can play anywhere in the field. Cody added another 10 RBIs to her total this past week, including three consecutive games with three RBIs. It is not inconceivable that she could become the fifth player to reach triple digits in a season, joining former Louisiana star Christi Orgeron as the only players to do so this century. Even 90 RBIs would be select company, that milestone reached just 14 times (most recently by Oklahoma’s Tiare Jennings a season ago). The next seven games will set the terms of Cody’s chase. She’ll see a whole bunch of Georgina Corrick and Keely Rochard in three-game series against USF and Virginia Tech, with a trip to Florida sandwiched in the middle.

George Washington takes command in the A-10. No one is in the driver’s seat quite like George Washington. Six days after beginning its A-10 schedule, George Washington is already 6-0 against the teams picked in preseason polls to finish second and third behind them this season: Saint Joseph’s and Fordham. Quite a week for a team that woke up Monday with a 6-10 record. In addition to Alexa Williams, ably replacing the run production lost with former standout Jenna Cone, Sierra Lange dominated in the circle. Against Fordham and Saint Joe’s, she was 4-0 with a 1.68 ERA and 24 strikeouts in 25 innings. That’s compared to a 4.02 ERA out of conference for the reigning A-10 Pitcher of the Year.

Southern Illinois went old school and paid the price. As a piece of throwback art, last Wednesday’s 15-inning duel between Southern Illinois and Missouri State was something special from a bygone age. Both starting pitchers, Southern Illinois’ Sarah Harness and Missouri State’s Stephany Dickerson, went the distance and faced more than 60 batters each. But it’s difficult not to suspect at least some correlation between that workload and Harness’ rough weekend against Northern Iowa. In two Saturday appearances, Harness allowed 10 earned runs on 13 hits and six walks. This isn’t an exact science. Maybe the two aren’t related and this was just a rough patch for Harness. After her 15-inning midweek, Dickerson went out and threw an 11-inning complete game victory on Sunday. But an extra day of rest isn’t insignificant, either.

Reily Galloway could use a little bit of luck. We present the latest example of win-loss record as a largely meaningless pitching statistic. Western Michigan’s Galloway struck out 29 batters and allowed eight hits and two earned runs in 15 innings across two starts against Toledo this past week. She went 1-1. She now has a 1.68 ERA and 118 strikeouts in 83.1 innings this season, allowing less than a runner per inning pitched. She’s 6-7 on the season.

What to watch this week

UCF at USF: It’s the nation’s No. 18 offense (6.8 runs per game) against a pitcher who hasn’t given up six earned runs all season — despite throwing more than 20 innings more than any other pitcher in the country. Settle in for the Knights against Georgina Corrick,

As noted by Eric Lopez, voice of UCF softball, the series also gives us national RBI leader Jada Cody against ERA leader Corrick, Interestingly, each program has featured an NCAA annual champion in those stats in the past — UCF’s Shelby Turnier led the nation in ERA in 2015 and USF’s Holly Groves led the nation in RBIS in 2004. But the last time different teams in the same conference produced both leaders was 2001, when Arizona’s Toni Mascarenas led in RBIs and UCLA’s Amanda Freed in ERA.

Iowa State at BYU: We mentioned this series from the Iowa State perspective in the Big 12 notebook, but it’s a huge deal for the host Cougars. For now, BYU’s at-large resume relies on wins against Stanford, San Diego State and Cal, with a loss against Cal Baptist a potential drag at the other end of the spectrum. BYU (No. 54) is currently ahead of Iowa State (No. 70) in the RPI, but the Cyclones are likely to find their way into the top 50 unless they fall completely flat in the Big 12. A series win could be gold for the Cougars down the road. And with Loyola Marymount looking highly competitive in conference, BYU can’t rely on an automatic bid.

Northern Iowa at Evansville: A non-conference success story (15-4 against everyone not named Alabama or Virginia Tech), Evansville stumbled in its MVC opener but rebounded to win a series against Drake. Meanwhile, UNI hinted that reports of its demise are greatly exaggerated after bludgeoning Southern Illinois with 33 runs in a three-game sweep. Kamryn Shaffer’s breakout weekend is a huge deal for the Panthers. Highlighted by a 4-for-4 day with two home runs and six RBIs, the first-team all-conference pick lifted her average nearly 100 points since March 10.

South Alabama at Georgia State: A series between the early Sun Belt leaders in South Alabama and one of the cellar dwellers in Georgia State doesn’t sound like marquee material. But let’s see how South Alabama fares as the frontrunner. Namely, can the Jaguars score enough runs to avoid losing games they should win? The pitching combo of Olivia Lackie and Jenna Hardy was simply brilliant last week, combining to allow just four runs in four games — including taking two of three against Texas State to improve to 5-1 in the league.