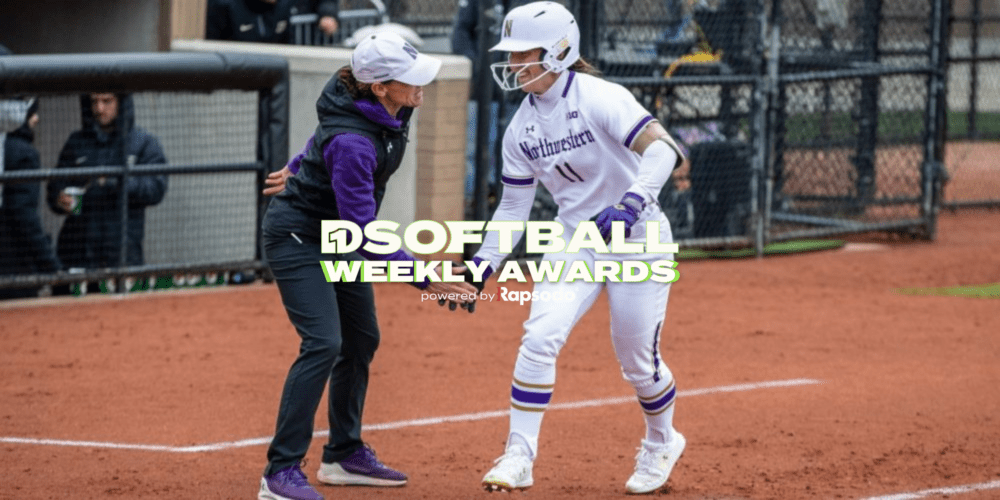 It was an extraordinary weekend for Rachel Lewis. Not only did she break Northwestern’s all-time home run record, but she scored in all 10 of her plate appearances in a three-game sweep against Purdue. Understandably, the Boilers eventually waved the white flag, intentionally walking her three times in the finale. But even that approach backfired, as Lewis promptly stole two bases in the game. As a result of the walks, Lewis carries an active streak of four home runs in her five most recent official at-bats.

Hailey Dolcini faced the most potent offense in the country last weekend – an offense averaging 9.4 runs a game – and held top-ranked Oklahoma to a mere five hits in 14 innings pitched. She came within a few outs of becoming the first pitcher in nearly three years to shut out the Sooners. She “settled” for becoming the first pitcher to beat them in the past 41 games, ending a winning streak that is tied for the third-best in NCAA Division I history.

The rookie slugger was at it again in Tempe, going 6-for-11 with eight RBIs and three home runs in a three-game sweep against Utah. She also walked twice, pushing her OBP for the series above .600. Sanders homered in all three victories to help keep the Sun Devils’ 20-game winning streak intact. Going back a week, she has home runs in four consecutive games and six of the past eight games.