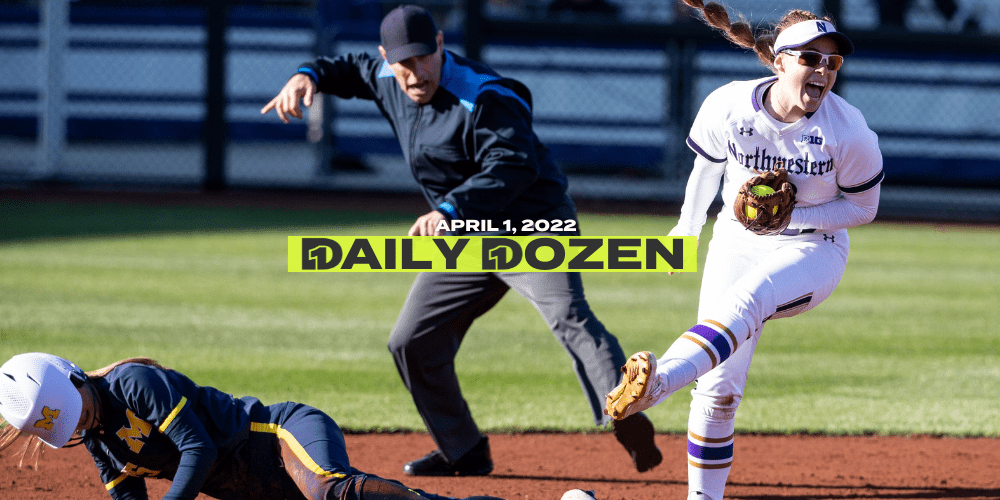 1. Northwestern wins the game; Michigan loses Lexie Blair. After Friday’s series opener, the idea of two more games between No. 21 Michigan and No. 6 Northwestern sounds about like the idea of meals after Thanksgiving. Probably necessary but difficult to contemplate. Northwestern’s 4-3 victory was a nine-inning softball smorgasbord. It was a pitching duel between Danielle Williams and Alex Storako, the two combining for 23 strikeouts (16 by Williams). But it was also a slugfest. After Michigan turned Northwestern defensive miscues into a run in the first inning and added two more in the second inning on Lexie Blair’s two-run double, Northwestern answered with three solo home runs — one from Maeve Nelson in the second inning and back-to-back blasts from Rachel Lewis and Jordyn Rudd in the sixth inning. Yet after all those long balls, the Wildcats won when Rudd beat the throw to first on a bases-loaded pop that bounced in front of second baseman Sierra Kersten and spun awkwardly in the direction of shortstop Ella McVey. For as glorious a game as it otherwise was, Blair’s injury in the sixth inning cast a pall over the proceedings. Making a brilliant catch in center field, the Big Ten Player of the Year collided awkwardly with the fence and appeared to hurt her knee or lower leg. She was helped off the field, supported by a trainer and coach Carol Hutchins.

2. Ole Miss pitching impresses again. The Rebels held down the potent Arkansas offense in the series opener, limiting the 10th-ranked Hogs to just four hits in a 2-0 victory. Anna Borgen, Savannah Diederich and Catelynn Riley combined for the shutout. Borgen, the reigning SEC Pitcher of the Week, allowed two hits in 5.0 innings. Riley earned the save, with 1.1 innings of hitless relief. The trio combined for only three strikeouts, relying on their defense to help hold down an Arkansas lineup that ranks second in the SEC in batting average (.348), slugging percentage (.615) and RBIs (201). The Rebels scored all the runs they would need in the second inning on RBI singles by Angelina DeLeon and KK Esparza. Coming off a sweep of Missouri, Ole Miss is steadily accumulating SEC wins to move back up the standings.

3. Grace Lyons is having a heck of a week. We can use the same line every week for No. 1 Oklahoma. Just insert the Sooner who fits the description. Now that Lynnsie Elam isn’t hitting home runs every at-bat, it’s Lyons’ turn. She ended Friday’s 11-1 victory against UAB with a grand slam, giving her five RBIs in the game. That matches her total in a midweek win against Wichita State, when she hit three home runs. So if you’re counting, her line for the week stands at: 5-for-7, 10 RBIs, four home runs. Oh, and because there are some constants for the Sooners, Jocelyn Alo added a home run.

4. Lowe provides major relief for Auburn. Shelby Lowe came through under pressure to help No. 17 Auburn register its first win over No. 7 Florida since 2005 on Friday night at Jane B. Moore Field. Lowe entered the game in relief with one out in the seventh inning and the Tigers leading 3-1. The sophomore lefty gave up a single to Skylar Wallace and faced the daunting challenge of facing Hannah Adams and Charla Echols with the bases loaded. Lowe struck out both of Florida’s veteran hitters to secure the win and improve Auburn’s record to 16-1 when leading after six innings. The Tigers used the long ball and Maddie Penta’s pitching to build their 3-1 advantage. Aspyn Godwin hit a two-run home run to left center in the fourth and Nelia Peralta added a solo shot in the fifth. Florida scored its lone run in the sixth on a sacrifice fly. Penta gave up five hits while striking out seven and walking two in 6.1 innings. Florida’s speed and miscommunication by Auburn’s defense between first and second allowed the Gators to threaten a comeback in the seventh. But Lowe eradicated the danger with her two clutch Ks to the delight of the home fans.

5. Mary Iakopo saves the day for No. 15 Texas. In the season-long battle between run production and run prevention in Austin, score one for run production. Or more accurately, score all three runs that came home on Iakopo’s walk-off home run and rescued a 7-5 victory against Iowa State. After dropping a midweek game against Louisiana — which took advantage of shaky Texas defense to score four runs on one hit in the key inning — the Longhorns appeared headed for more of the same against the Cyclones. Three errors in the fourth inning handed Iowa State a lead that it held into the bottom of the seventh inning. But with two outs and two runners on base, Iakopo erased the defensive miscues.

6. Faraimo hands Hansen her first career loss. No. 13 Oregon freshman Stevie Hansen pitched well against No. 2 UCLA, as she continued to escape jams with help from her defense. But Megan Faraimo reminded the rookie that it’s not how you start, it’s how you finish. After Ariel Carlson hit a solo shot in the second inning, Faraimo faced hardly any trouble beyond stranding a pair in scoring position in the sixth. The Bruins scored a run in three consecutive innings late to give Faraimo the run support she needed in a 3-1 victory. Both team and pitcher remain unbeaten in the Pac-12.

7. Kentucky puts midweek defeat to good use. No. 12 Kentucky dropped a midweek game for the third week in a row when Ohio State visited Wednesday. But the Wildcats found a silver lining in an extended shutout relief appearance from Tatum Spangler. They used that to good effect Friday, with Spangler shutting down No. 22 LSU and giving her teammates plenty of time to rally for a series-opening 5-3 victory in Baton Rouge. Spangler had thrown just four and 2/3 innings all season before going five innings in the midweek against the Buckeyes. But Rachel Lawson turned to her again Friday after illegal pitches slowed starter Kennedy Sullivan and Sloan Gayan walked three batters in less than an inning. Spangler struck out Taylor Pleasants to stand the bases loaded in the second and allowed just four hits and one run in five and 1/3 innings of relief.

8. Arizona finally had a good night at the plate, and it didn’t matter. The Wildcats put up seven runs against No. 16 Washington. They knocked Gabbie Plain out of the game in the fifth inning. The pitching staff held Baylee Klingler hitless. Yet, Arizona dropped to 0-7 in Pac-12 play. The young pups Olivia Johnson and Kinsey Fiedler combined to go 7-for-7 in the 12-7 victory. Johnson kept the Huskies in the game early with a pair of home runs. Meanwhile, Fielder used one of her three doubles to tie the game in the sixth, the biggest inning of the night. After the teams traded four-spots in the fifth inning, Washington put together a seven-run, two-out rally in the sixth inning. A pinch-hit, three-run bomb from Jadelyn Allchin was the dagger.

9. Rutgers walked the wrong Andrews. At 23-13, whatever Rutgers is doing is working well enough. But an aggressive approach when it comes to putting sluggers on base backfired at Nebraska. You might remember the Scarlet Knights as the team that treated Washington’s Olivia Johnson like Jocelyn Alo during the opening weekend, intentionally walking Johnson in four consecutive plate appearances. Well, they did essentially the same to Billie Andrews on Friday. Not all were intentional, but Andrews walked in all four plate appearances. The problem was that after Rutgers intentionally walked Billie in the second inning, Brooke Andrews, her sister, followed with a pinch-hit, three-run home run in the next at-bat that erased a deficit and put her team ahead to stay in a 12-4 victory.

10. Ashley Rogers tosses four more shutout innings. The Tennessee senior ace made her second start since returning from an injury as the 11th-ranked Lady Vols opened a weekend series against Mississippi State. Rogers allowed two hits in 4.0 innings with six strikeouts and two walks in a 9-1 five-inning win. Last weekend, Rogers threw 52 pitches in three innings against Florida in her first appearance in the circle since March 4th. Rogers wasn’t on a pitch count against MSU after the UT trainers gave her the full go. Rylie West provided an early lead for Rogers in the second inning on a short fly to right field that was ruled an inside-the-park home run. Ivy Davis and Kelcy Leach hit more conventional home runs as part of a six-run fourth inning that provided enough insurance to call it a night for Rogers after 65 pitches.

11.  DePaul pulls back from the brink. The Blue Demons began playing Big East softball in 2006. Since then, they’ve never lost more than nine conference games or finished with a conference winning percentage worse than .591. They woke up Friday with a 1-5 Big East record. In other words, they were a bad series against defending conference tournament champion Villanova away from historical calamity. There is a long way still to go, but DePaul is now one game closer to familiar territory after a 9-1 rout of the Wildcats. Freshmen Baylee Cosgrove and Anna Wohlers entered the game with 22 hits all season, but they combined to go 4-for-5 with two home runs and five RBIs from the bottom of the order. (Meanwhile, in the Big East series between the teams currently atop the conference, Butler pulled within half a game of UConn on the strength of Karli Ricketts’ three-hitter against the Huskies.)

12. Home run trot of the season. The Appalachian State recap describes Kayt Houston’s walk-off home run against Georgia Southern as one that “just snuck inside the foul pole.” If you watch the video below, that must be an understatement. Houston’s double-take home run trot is one of a kind, but it’s not as if the sophomore is unfamiliar with success. After hitting three home runs in a game at Louisiana Monroe last week, she was the Sun Belt Player of the Week.

Bonus: As new programs go, Montana hasn’t generated quite the same buzz as the likes of Duke and Clemson, although like its ACC peers, it has reached the NCAA tournament. But the Grizzlies did something Friday that neither the Blue Devils nor Tigers have — score 23 runs in a game. Montana set a program record (all right, those only date back to 2015) in a 23-7 victory against Southern Utah. Eight Grizzlies drove in runs, including five from Cami Sellers, and the team amassed 16 walks and 17 hits. Montana wasn’t done, scoring 14 more runs to win the nightcap.

Nevada’s equipment stolen. Only 36 hours before they were scheduled to play San Diego State on the road, the Wolfpack had their bats stolen from their locker room on campus. Head coach Linda Garza sent out a plea on social media asking for anyone to donate bats for their weekend series. The local community, other programs and Nevada’s Mizuno rep responded. They all pulled together to provide some equipment for the team. Bats were sent to Nevada’s hotel in San Diego, with the first shipment arriving a few hours before the first pitch of Friday’s opener.