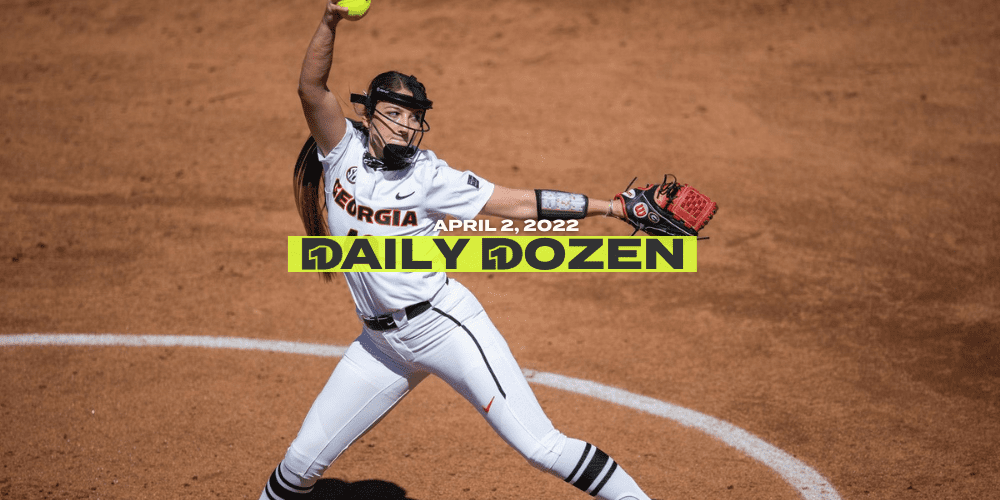 1. Georgia heads to Tuscaloosa and arrives atop the SEC standings. Montana Fouts retired the first nine batters she faced without breaking a sweat as she struck out five Bulldog hitters. But Georgia made her work the second time around. Jaiden Fields and Sara Mosley worked full counts resulting in a single and a walk. Lacey Fincher squared up a double to break the scoreless game. Jayde Kearney and Aniyah Black dropped in a pair of RBI singles to make it a three-run frame. The real star might’ve been in the circle for Georgia. It seemed like Ally Shipman might’ve sparked her offense ending Madison Kerpics shutout in fourth. Yet, the righty showed no fear the next time she faced the Alabama catcher. Bases loaded, two outs, a Patrick Murphy ejection, it was all there for Shipman to give Alabama the lead and let the Rhoads House explode. Instead, Kerpics sent her back to the dugout after three pitches to end the fifth. A Sydney Kuma home run added a cushion to Georgia’s lead as it held onto the series opening win on Saturday night.

2. No lead is safe between Notre Dame and Georgia Tech. The first two games in the ACC series have been filled with wild comebacks and lots of runs. One night after watching Georgia Tech rally for a series-opening win, Notre Dame staged one of its own to even the series. The Irish erased a six-run deficit to beat the Yellowjackets 13-12 in nine innings on a walk-off single by Miranda Johnson. Emma Clark finished 5 for 6 with five runs scored for Notre Dame while Leea Hanks hit home runs in the bottom of the seventh and the ninth. Georgia Tech took a 9-5 lead by scoring seven runs in the fourth inning. The Jackets added two unearned runs in the fifth to lead 11-5. But Notre Dame began to cut into the deficit, scoring three in the sixth and seventh to send the game into extra innings. Hanks led off the ninth with a solo home run to tie the game 12-12 and set the stage for Johnson’s walk-off single that drove in Clark with the game-winning run. On Friday night, Georgia Tech scored four runs in the final inning to beat Notre Dame 9-8. There’s no telling what’s in store for Sunday’s series-finale, but betting on a comeback is a logical wager.

3. The pendulum swung plenty in Austin as well. Apparently Texas didn’t think you were entertained by Friday night’s walk-off blast. After the Longhorns trotted out to a 4-1 lead, Carli Spelhaug and Mikayla Ramos hit back-to-back homers in the fourth to put Iowa State out in front. Texas tied it in the bottom half of the fourth and retook the lead in the fifth. Each team put together three-run sixth innings to make it 9-8 in favor of Texas. Mike White turned to Shea O’Leary for the save, but her outing didn’t last long. Alesia Ranches followed a Kaylee Pond single with a two-run go-ahead home run. By now you can probably guess Texas answered in the seventh to extend the game. Then in the eighth, Bella Dayton lined a double past the outstretched glove of Milaysia Ochoa in right field to score JJ Smith for another win in walk-off fashion.

4. The home run race tightened. With Rutgers taking the bat out of Billie Andrews’ hands, walking the Nebraska slugger four times for the second game in a row, the rest of the nation had time Saturday to chase down the home run leader (17). And, golly, did they. Mississippi State’s Mia Davidson took advantage, hitting her SEC-leading 15th in a victory against Tennessee. She’s one ahead of Minnesota’s Natalie DenHartog, who hit her 14th home run in a victory against Illinois. Wichita State’s Addison Barnard is ahead of both of them after she hit two out in a victory against Tulsa. The sophomore has three this week and 16 on the season, level with Jocelyn Alo — and level with Washington’s Baylee Klinger. No one put Saturday to better use than Klingler, who hit two home runs at Arizona, including a grand slam in the seventh inning that extended Arizona’s record losing streak to eight games. You know, maybe Rutgers is onto something. In Klinger’s case, even with the bases loaded.

5. Georgina Corrick would like you to know she’s still out here. USF tumbled out of the Top 25 after a couple of difficult weeks to close March, including a painful sweep at the hands of rival UCF, but that doesn’t mean Corrick is done posting video-game numbers. Still in the thick of the Player of the Year race, USF’s ace threw her first seven-inning no-hitter of the season in Saturday’s 6-0 victory against East Carolina. Corrick recorded 13 of 21 outs by strikeout and missed a perfect game only through a walk and a hit batter. That effort followed a one-hitter with 11 strikeouts a day earlier against the Pirates. She’s now 24-3 with a 0.44 ERA — it wasn’t until USC Upstate’s Hannah Hogue won Saturday that Corrick had any company in the 20-win club.

6. Maeve Nelson’s very strange single. In the bottom of the first inning, Northwestern appeared to take a 2-0 lead against Michigan when Maeve Nelson hit a home run to left field. The ball didn’t clear the fence by much, but it got out quickly enough that Michigan outfielder Ellie Sieler didn’t come close on a leap at the wall. In other words, while it wasn’t as prodigious as Nelson’s shot a day earlier that landed on the roof of Welsh-Ryan Arena, it was pretty clearly a home run. Unfortunately for the Wildcats, Jordyn Rudd, the runner on first base, either didn’t see the ball clear the fence amidst the rain/sleet falling at the time or reacted to something else she saw or heard. After rounding second, Rudd veered off toward the dugout and was called out for leaving the base path (before Nelson was out for passing her on the bases). The home run became a single and the score remained 0-0. That’s where it will be when the teams resume play Sunday – the wintery weather stopped play Saturday in the top of the third inning.

7. The Saturday switcheroo in Auburn. Much like the Tigers did on Friday, Florida had to stave off a seven-inning comeback. The combination of Lexie Delbrey and Natalie Lugo had held Auburn to one hit through five innings. Nelia Pealta proceeded to hit the second two-run blast of the day to pull her team within three in the sixth inning. Auburn tried to save its best for last. After already scoring one run in the frame, Makayla Packer tripled to make it a one-run game and put the tying run on third. Tim Walton stuck with Lugo, and it worked out. Jessie Blaine grounded out and Florida evened the series.

8. The Beaver dam is too strong for the ferocious Golden Bears lineup. Mariah Mazon and Sarah Haendiges are quietly becoming quite the one, two punch for Oregon State. In Cal’s first six Pac-12 games, the team averaged six runs per game. When Haendiges tossed a shutout on Friday, you could’ve chalked it up as a bad day at the office. Mazon wanted to put a stamp on this series win. She tossed five scoreless innings while Oregon State’s offense provided eight runs. Haendiges finished it off in the sixth as the Beavers will return home with another series win regardless of Sunday’s results.

9. UNLV blasts Boise State out of the rankings. The Rebels made quite the statement ending the Broncos’ 10-game winning streak in a 9-0 win on Friday behind Jenny Bressler’s one-hitter. Boise State came out firing putting two runs on the board in the first. UNLV quickly shot back with a pair of homers from Lauryn Baker and April Visser. Two more homers came off the bats of Mia Trejo and Densie Armendariz in the fourth to extend the lead. Bressler came in relief to tame the Bronco bats, throwing five scoreless innings to secure the series win.

10. Devon Miller’s favorite day. If it was a day earlier, you might assume it was a joke. But for Fordham’s Miller, there’s just something about April 2. A year ago, Miller threw a perfect game against La Salle on the second day of the month. This year? She threw a five-inning no-hitter in her team’s 9-0 run-rule victory against UMass. This has been a challenging season for one of last year’s 15 finalists for NFCA Freshman of the Year. But after closing March with a two-hitter against Rhode Island and a season-low 3.46 ERA, she dropped it to 3.22 with Saturday’s gem.

11. Ashley Miller stings No. 24 Ohio State. The Buckeyes can’t quite solve the middle game of conference series. Then again, a lot of teams struggle to solve Michigan State’s Miller at any point during a series. The Spartans held their ace for Saturday’s second game and she responded with 12 strikeouts and seven strong innings in a 2-1 victory. For Ohio State, the defeat came a week after allowing 17 runs in the middle game of their series against Indiana. A sophomore who leads the Big Ten with a 0.81 ERA, Miller has beaten 10 conference opponents in her career, needing Michigan, Minnesota and Northwestern to complete her set.

12. Welcome back, fun! We turn to Oklahoma as our example for all things home runs. Even if they waited a little late to start launching them in Saturday’s victory against UAB, you might have noticed the mass of Sooners awaiting Jayda Coleman at the plate. She wasn’t alone. Pac-12 Network analyst Kenzie Fowler noted during the Arizona-Washington broadcast that the NCAA this week loosened restrictions on players gathering at home plate to celebrate home runs.

Bonus: Grace Cheleman is as clutch as you can get. With Marshall trailing by a run in the bottom of the seventh inning Saturday against Charlotte, Cheleman delivered a game-tying RBI single. All right, not a bad highlight for any player’s day. But Cheleman wasn’t done. An inning later, after Charlotte reclaimed the lead in the top of the eighth, she came to the plate with two outs and delivered the walk-off RBI single that won the game and clinched the series for the Thundering Herd (now 21-9 on the season). Two innings and two game-defining hits. Not bad for a player who entered the game with six RBIs this season.