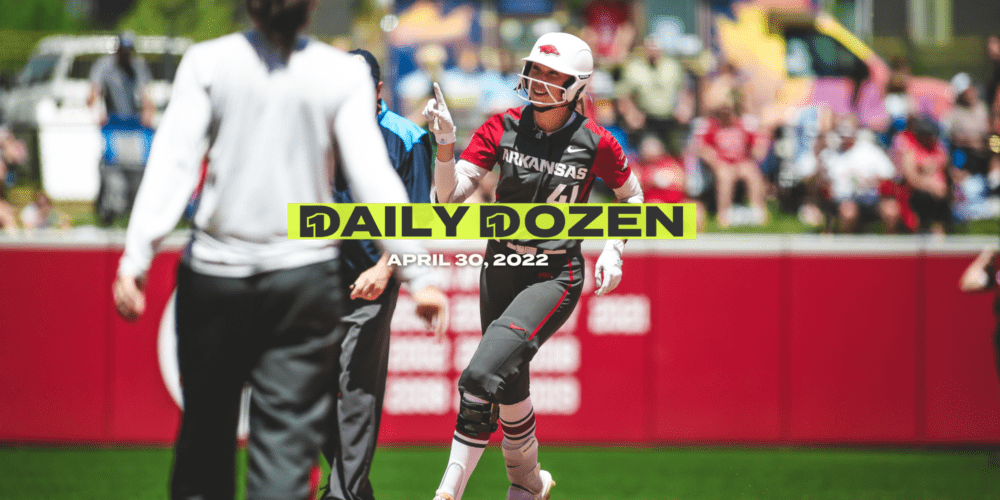 1. Danielle Gibson spotted every other Razorback a season. And it didn’t matter. Gibson became No. 5 Arkansas’ career leader in total bases (382) during Saturday’s 8-4 win against South Carolina. She broke the record with a home run because, well, of course she did. What makes any cumulative career record more impressive for Gibson is she spent her first season at Arizona State – where she ranked among Pac-12 leaders in total bases in 2018. Those don’t count toward her Arkansas totals, but in 175 games with the Razorbacks, roughly the equivalent of three full seasons, she passed the likes of Devon Wallace (220 games) and Jessica Backhora (241 games). For total bases Saturday, even Gibson played second fiddle to Linnie Malkin’s two home runs. No wonder 3,119 people showed up at Bogle Park on Saturday, the second-largest crowd in program history.

2. Virginia Tech headlines conference title-clinching party. The second-ranked Hokies secured the ACC regular-season title with a 9-0 six-inning victory over Boston College in Chestnut Hill. The title was the second in four years for the Hokies (38-6, 20-2) after capturing the ACC crown in 2019. Freshman Emma Lemley threw a three-hit shutout, striking out seven and walking two. Emma Ritter was 3 for 3 with three runs scored, three RBIs and a home run to lead the Virginia Tech offense, which produced five runs in the sixth inning. The Hokies will go for the sweep on Sunday, knowing they have already secured the title and the No. 1 seed in the ACC tournament.

Virginia Tech wasn’t the only program to clinch a regular-season title on Saturday. Among the others:

3. Georgina Corrick eventually completes her perfect game. Nearly 20 hours elapsed between the first and last pitches of Corrick’s second career perfect game. Fortunately for her, she wasn’t pitching that entire time. Although we suspect she probably could have. Corrick was perfect through four innings against the Cougars on Friday, but weather forced the teams to suspend play. No problem. The USF ace returned Saturday morning and retired all nine batters she faced to complete the 4-0 victory and the program’s fifth perfect game. The seventh inning wasn’t without drama, shortstop Alanah Rivera needing to execute a flawless backhand in the hole to preserve perfection, but Corrick took it from there. Playing her final home series, she struck out the final batter to cue the celebration. Just for good measure, Corrick turned around and pitched a two-hit shutout in the regularly scheduled game. Maybe she really could pitch all day.

4. Delbrey, great No. 11 Florida defense stymies No. 25 LSU. The Gators didn’t have much time to stew over being run-ruled by the Tigers in the series opener on Friday night. They bounced back in a big way, with their offense producing early, their freshman dealing in the circle and their defense providing a string of web gems. Delbrey carried a no-hitter into the seventh inning as Florida evened the series with a 6-1 win over LSU. After walking the first two batters of the game, Delbrey settled in and held down an LSU offense that had 17 hits and nine runs on Friday night. Cheyenne Lindsey sparked the Florida offense with a home run in the first inning and the Gators never looked back. Delbrey was three outs away from a milestone before Shelbi Sunseri homered in the seventh. It was a bit of redemption for Sunseri after being robbed of a home run in the fourth inning on a sensational barehanded catch by Katie Kistler at the wall in left field (see video below). The Florida defense had Delbrey’s back throughout the win, producing a plethora of highlight-reel worthy plays. Delbrey allowed one run on one hit with three strikeouts and three walks in 6.0 innings. Rylee Trlicek secured the final three outs for the Gators. Along with her defensive gem, Kistler was 3 for 4 at the plate with two RBIs. The teams meet in the rubber match on Sunday at noon ET (ESPN2).

5. Alex Storako, Lexie Blair and a sigh of relief for No. 22 Michigan. This hasn’t been the easiest season in Ann Arbor. A program that hasn’t finished .500 in the conference since before any of its current players were born was once again in danger of slipping on the wrong side of that mark after losing the series opener against Minnesota. But after a big run from Blair and a shutout from Storako – this team’s DNA, in other words – the series is level and the Wolverines are 9-8 in the league. Almost quietly, Storako produced her third shutout appearance in her past four attempts (two complete games and a six-inning relief stint). And after walking to lead off the bottom of the fourth inning Blair scored on Melina Livingston’s RBI double. The big brace on the reigning Big Ten Player of the Year’s right knee notwithstanding, it had to cheer Michigan fans to see Blair move freely when sacrificed to second base by Taylor Bump and coming home on Livingston’s hit.

6. Mia Davidson tries to get two home runs with one swing. The distance on Davidson’s home run to deep center in Lexington, Ky. was impressive. The significance was even greater. Davidson’s two-run homer in the sixth inning stretched Mississippi State’s lead against No. 14 Kentucky to three runs and provided some breathing room en route to a 6-2 victory. The eventual four-run margin marked the team’s best SEC result in more than three weeks. Even after losing seven of their past eight SEC games prior to Saturday, the Bulldogs weren’t in any postseason trouble. Their resume is rock solid. But momentum matters. And after going six games without a home run – the blink of an eye for most players but tied for her longest stretch of the season – Davidson provided the exclamation point on what Matalasi Faapito started with a two-run home run in the second inning.

7. Replay it again for the Ole Miss walk-off. Ole Miss didn’t let No. 13 Tennessee’s late-game rally sink its spirit. The Rebels took advantage of a replay review that went in their favor to beat the Lady Vols 5-4 on a walk-off single by freshman pitcher Catelyn Riley in the series opener. Sparked by a solo home run from Ivy Davis, Tennessee plated two runs in the top of the seventh to tie the game 4-4. In the bottom half, Ole Miss used a bunt and infield single to put two runners on with one out. Tennessee appeared to turn a 6-4-3 double play to escape the jam, but the final out was overturned after a replay review showed Abbey Latham beat the throw at first by a half step to keep the inning alive. Riley helped her own cause with a single through the right side to secure the walk-off victory and extend the Ole Miss winning streak to six straight. Ole Miss starter Anna Borgen largely silenced the UT bats, giving up one earned run on six hits in 6.1 innings pitched until Riley took over in the seventh to earn the win.

8. A tale of two halves in Auburn. Obviously, there’s no halftime in softball. However, for the first three and half innings, No. 16 Georgia had complete control over No. 19 Aurburn. Lacey Fincher and Mackenzie Puckett homered off of KK Dismukes. Bulldog starter Lauren Mathis kept wiggling her way out of trouble. She didn’t escape it in the fourth. Lindsey Garcia doubled to put her team on the board. Another run came in on a fielder’s choice to pull within one. Auburn started the sixth with back-to-back walks before Bri Ellis hit the game-tying double. Nelia Peralta put the ball in the air for a sacrifice fly to put the Tigers in front for good. Dismukes went on to throw three perfect innings to close it out and secure the series win.

9. Nothing civil about the rivalry of Oregon. Two teams that came into the series struggling, No. 21 Oregon State and Oregon fought till the end. Oregon State’s Grace Messmer hit a two-run homer to get the scoring started. Hometown kid Ariel Carlson answered back to give the Ducks the lead with a three-run bomb in fourth. The Beavers immediately tied the game in the fifth with an Eliana Gottlieb triple down the line. Neither coach wanted to give in as it got tight down the stretch. Both Laura Berg and Melyssa Lombardi turned to their Friday night starters, Mariah Mazon and Stevie Hansen, to keep the game tied. Hansen kept Oregon State off the board in the sixth and seventh. That opened the door for Oregon’s offense. Carlson turned a full count into a leadoff walk, later advancing to second on a wild pitch. Jasmine Williams, one of the three Duck seniors honored this weekend, put the ball in play on a slow roller to Savanah Whatley, who threw it away allowing Carlson to score, giving Oregon a 4-3 win.

10. Boston University plays a lot of softball to reach 25 wins in a row. The nation’s longest active winning streak stands at 25 games after Boston University swept a Patriot League doubleheader from Army on Saturday. But the Terriers had to work for it. Both games were still tied at the end of seven innings. RBI hits from Emily Gant and Jen Horita brought home the necessary runs in the eighth inning of the opener, a 2-0 victory. But the Terriers left it even later before winning the nightcap without the benefit of a hit in extra innings. With the game tied 1-1 in the ninth inning. AJ Huerta-Leipner’s walk brought home the eventual winning run after a walk, error and hit batter loaded the bases. Despite the overtime, BU got two complete game efforts in the circle, capped by Lizzy Avery’s two-hitter in the nightcap.

11. Winstead climbs the UNCW charts. UNC Wilmington freshman Emily Winstead is making a major impact in her first season in the circle for the Seahawks. Winstead tallied a career-high 14 strikeouts on Saturday in a win over Elon to set the program’s freshman single-season strikeout record. Winstead needed only two strikeouts to overtake the freshman record set by Casey Rowland in 2012. She got 12 more to push her total to 152. The 14 Ks are the second-most in program history regardless of class. Winstead had reached 13 strikeouts twice this season, including last week against College of Charleston. The Bunn, N.C. native, who was named to the NFCA Freshman Top 25 list last week, holds four of the top five single-game strikeout games in UNCW history.

Bonus: Friends and family welcome in Dayton. Hits, not so much. There are always nerves on senior day. Occasionally, there aren’t any hits. Honored before her team’s doubleheader against UMass, Dayton’s Kelsey Gumm threw the first seven-inning no-hitter of her college career in a 2-0 victory against UMass. Nor was it a game without stakes. Only the top six finishers qualify for the Atlantic 10 tournament. By sweeping the doubleheader, the Flyers assured themselves an invite. After spending her first two seasons at Seton Hall and the past two seasons at Dayton, Gumm technically has a season of pandemic eligibility remaining. The accounting major was nevertheless among the three Flyers honored on senior day.