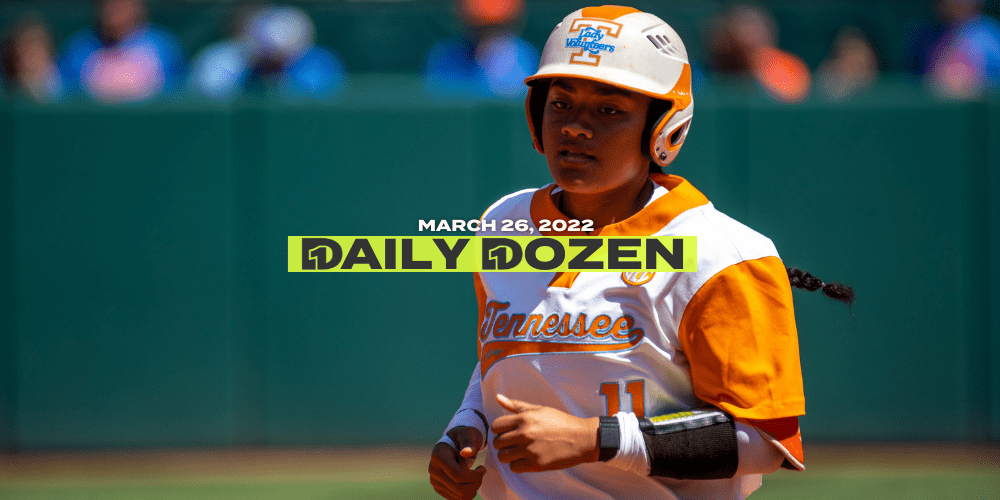 1. Tennessee wins the series and gets its ace back. Ashley Rogers didn’t look like she had missed a beat in returning from injury. And as a result, No. 6 Florida looks like it could use a vacation after No. 14 Tennessee clinched the SEC series with a 7-2 victory. Rogers was back in the circle to start Saturday’s game in Gainesville, her first appearance since March 4. The Lady Vols held their own without her, including Friday’s series-opening victory, but she wasted no time reminding us why she makes them a different team. After retiring Gators leadoff batter Hannah Adams on a grounder in the bottom of the first, she struck out Skylar Wallace and Charla Echols — players who entered the game with 15 strikeouts in more than 200 plate appearances. Apparently working on a pitch count, Rogers struck out five batters in three no-hit innings. She left with a 4-0 lead, the Lady Vols taking advantage of Lexie Delbrey’s inconsistent control and getting a two-run home run from Zaida Puni (she added a two-run double later). Florida saw its SEC regular-season series winning streak snapped at 11 dating back to 2020.

2. The Bogle Bash. No. 9 Arkansas and No. 25 LSU combined for 15 runs, 23 hits, 11 walks, 17 runners left on base, and a whole lot of chaos on ESPN2. Every time the Tigers scored, it felt like the Razorbacks had a counter. Georgia Clark and Shelbi Sunseri hit back-to-back home runs to help put together a three-spot in the third inning, but it took two batters for Arkansas to tie things up at five. Jenna Bloom finally put up the game’s first zero in the fourth (and the fifth), which presented a chance for her team to take the lead. As good as the bats were for the Hogs, they benefited from LSU’s errors. Danieca Coffey appeared to have the final out, getting the Tigers out of a bases-loaded jam. Her throw went wide allowing a pair to score. As good as Taylor Plesants was at the plate, her defense also let LSU down. Her fielding error in the fifth extended Arkansas’ lead to three. She brought her team back within one with a two-run bomb in the following half inning, but it wasn’t enough. Chinese Delce earned the save throwing 1.2 hitless innings for the series opening win. Read more in Brady’s Breakdown.

3. Azevedo, Faraimo blank No. 15 Washington. Holly Azevedo and Kelley Lynch gave us a pitcher’s duel for four-plus innings, although neither finished the contest. No. 2 UCLA finally got to Lynch in the fourth inning after Savannah Pola started the rally and Maya Brady drove her in. That’s when Kelly Inouye-Perez and Heather Tarr went different directions with their next move in the circle. Pat Moore replaced Lynch in the fifth inning, when the starter appeared to be dealing with a blister or other finger issue. Tarr stuck to her season-long plan to limit Gabbie Plain’s usage. Inouye-Perez went to Megan Faraimo in the sixth inning, after Azevedo had allowed only her fourth hit of the game. Faraimo kept the one-run lead intact. The UCLA offense rewarded her by scoring three runs off Moore despite not making solid contact on a pair of hits. Lily Agan tried to start a rally in the seventh with a double, but Faraimo responded by ending the game on three consecutive strikeouts to secure the series.

4. Georgia barks back in a big way. Makinzy Herzog’s fourth-inning single put the Aggies up 7-1 over the Bulldogs. It looked like one of those games that just got away from No. 21 Georgia’s pitching staff, but the lineup had other plans. Sydney Kuma injected a bit of energy in the bottom half of the fourth. Her two-run bomb cut the deficit to four. That’s all it took to put the pressure back on. The Bulldogs added two more in the fourth after putting together a sequence of an error, walk, single, passed ball and a sacrifice fly. Jayda Kearney hit the game-tying homer in the fifth. Jaiden Fields capped off the 8-7 win with a walk-off single in the eighth. The unsung hero was pitcher Lauren Mathis, who threw four hitless innings in relief to hold the Aggies down on the other end.

5. Sun Devils power their way to a run-rule win in Tucson. No. 22 Arizona State had a few newcomers make their presence known in this rivalry. Transfers Jazmyn Rollin, Jessi Puk and freshman Cydney Sanders all hit home runs. Alynah Torres and Yanni Acuña, Arizona locals, drove in three more runs in the 11-0 win. No. 17 Arizona’s struggles at the plate continued, as well, after Lindsay Lopez threw a two-hit shutout in five innings. The Wildcats have put up a zero in four of five conference games. This was also the first time in the NCAA era that Arizona State run-ruled Arizona in Tucson.

6. Kaylee Tow is Tide’s steadying force. Tow might not always grab the headlines for Alabama, but she’s a consistent presence who comes through when needed. The graduate senior helped the Tide win the series against South Carolina with a 10-2 victory on Saturday. Tow was 2 for 4 with two RBIs. Her two-run double in the fifth enabled Alabama to pull away after the Gamecocks had cut the Tide lead to one run. In the series opener, Tow helped spark Alabama’s late comeback with an RBI that cut the deficit to three runs and led to pinch hitter KJ Haney belting the go-ahead grand slam. Tow added a solo home run for insurance in the 7-5 win. Tow is only batting .250, but she seems to find the right moments to contribute when the Tide need it most.

7. The Tar Heel State rivalry has not lacked for runs. Pitchers may want to run for cover considering how the first two games have gone in the series between NC State and North Carolina. Saturday’s game featured a program-record nine home runs hit by the winning team and a triple play turned by the losing team. NC State evened the series at a game apiece by beating the Tar Heels 15-8 in Chapel Hill. The Wolfpack lived up to their #HomeRunMindset by hitting nine, including two apiece from Libby Whittaker, Logan Morris and Taylor Johnson. The Tar Heels turned a rare triple play in the seventh inning that went from shortstop to catcher to third base to second base. In the opener on Friday, UNC beat NC State 12-11 after rallying from a 5-0 deficit. It was the most runs in a game in series history since 1977. It took less than 24 hours for the teams to equal the mark. How high can they go on Sunday?

8. Maddie Penta wins the hard way. It’s great to have a pitcher who ranks in the top 10 nationally in strikeouts, as Penta did entering the weekend. Strikeouts erase a lot of miscues. But it’s also helpful to know a pitcher has a Plan B. No. 18 Auburn evened its series at No. 12 Kentucky with a 6-3 victory. Handed a three-run lead before she threw a pitch, courtesy of Lindsey Garcia’s three-run home run, Penta didn’t dominate Kentucky hitters. She gave up seven hits and three runs (the runs coming after Auburn extended its lead to six runs). She only struck out four. But she battled on the road in cold weather and came out with the win. It’s just the second time in her admittedly young career that Penta went seven innings, struck out fewer than five batters and won. The first? A complete game win against the Wildcats a season ago.

9. Kandra Lamb throws her first perfect game to keep Louisiana rolling. No-hitters? Been there, done that. Lamb threw a no-hitter earlier this season. Heck, she threw back-to-back no-hitters in her first two college starts in 2019. But she hadn’t thrown a perfect game until blanking UT Arlington on just 60 pitches in Saturday’s 10-0 victory. Admittedly, Louisiana’s run production meant it was only a five-inning perfect game, but Lamb will take it in a slightly uneven season that has matched her team’s slightly underwhelming season. The Ragin’ Cajuns haven’t been perfect, but Lamb was Saturday.

10. Lauren Espalin has a day for the Golden Gophers. Espalin has been a welcome addition at Minnesota. The super senior transfer from Cal settled in as a leadoff option and entered Saturday hitting .361 this season. But she also entered the day with one home run and 10 RBIs in roughly 100 plate appearances. Saturday, she added two more home runs and seven more RBIs in just the second and third innings of an 11-7 victory against Rutgers. The career day matched the program’s single-game record for RBIs.

12. Saturday was twice as nice for sluggers. On a day when Oklahoma didn’t hit any home runs for the first time since its first game this month, a whole lot of batters tried to pick up the slack. We mentioned NC State’s trio, Minnesota’s Espalin and JMU’s Hall and Hall, but they were far from the only people to hit two home runs. While not exhaustive, the list includes Clemson’s McKenzie Clark in a victory against Louisville, BYU’s Violet Zavadnik in a victory against Iowa State, UNC Greensboro’s Maycin Brown in a victory against Mercer, and Houston’s Kati Ray Brown and Becca Schulte in a victory against Tulsa.

Bonus: Lonni Alameda earned career win No. 800 in Florida State’s doubleheader sweep at FIU. That’s an impressive number for any coach. What’s more impressive, in a way, is that it doesn’t even make her the program’s all-time leader. We’re struggling to think of another Division I program that has two members of the 800-win club, Alameda following in the footsteps of FSU stadium namesake Dr. JoAnne Graf (1,186 wins). Alameda may need the better part of another decade to catch the legend.

Bonus II: Welcome back, Mariah Mazon. Ashley Rogers wasn’t the only ace making a return from injury. Pitching for the first time since throwing a no-hitter on March 7, Oregon State’s Mazon beat Stanford with a one-hitter in a 4-1 victory. Presumably the lone hit was the rust. With that boost, the Beavers clinched the Pac-12 series with a game to spare.