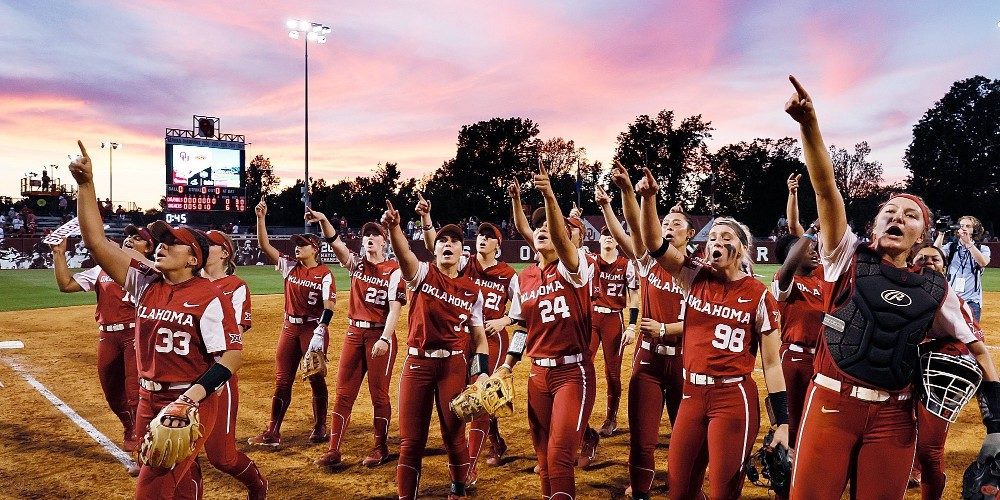 As a lifelong Oklahoma resident, Toby Baldwin was always aware of the rise of the University of Oklahoma softball program under head coach Patty Gasso. He watched the Sooners start to collect national titles over the years and become more popular.

But it wasn’t until Baldwin accompanied them on a trip to the Mary Nutter Classic in California earlier this season that he truly understood the magnitude.

“I have always been involved in football so I have seen the zealousness and fanaticism at games,” said Baldwin, OU’s director of compliance education. “But once we got to Cathedral City and seeing just the absolute wall-to-wall of people and trying to navigate the team through that made me say, ‘OK. This is a different level. This is rock star. This is like SEC football.’”

The defending national champion Sooners (57-3) will be playing for their sixth national title when they face Big 12 rival Texas in the championship series of the Women’s College World Series, beginning Wednesday at 8:30 ET (ESPN) in Oklahoma City.

Given OU’s star-studded lineup, style of play and passionate fan base, Oklahoma has made a major push to provide more resources for the players and elevate the OU softball brand to an even higher level.

Baldwin, in his first season as the sport administrator for the program, has been front and center.

“He is really a go-getter and has worked really hard with our administration to share the challenges we are having,” Gasso said. “He is fighting for us, and I have been really pleased with his commitment to what we are doing and his fight behind the scenes.”

Before the start of the season, the program launched a restructured booster club under a new name, The Trophy Club.

The club, which has more than 200 members, provides different tiers of donations ranging from $100-$2,500 that come with varying degrees of benefits, including virtual events, newsletters, team-signed items and exclusive meet and greets. OU’s season ticket waiting list has grown to more than 600 individuals.

Last October, OU announced a $9 million pledge from Love’s Travel Stop to help fund a new stadium that will be called Love’s Field and double the current seating capacity to 3,000. The company, which is headquartered in Oklahoma City, also said it will match every other donation up to an additional $3 million. The $12 million gift would be the largest directed toward a female specific sport program in OU Athletics history.

Three weeks ago, philanthropists and longtime OU supporters Robyn and Mike Batson pledged a $1 million gift to the softball program.

“The overall experience of the student-athlete is so important, and people want to give to help support them,” Baldwin said. “These women deserve to have all the resources necessary for them to be successful on and off the field.”

One of OU’s biggest fundraising weeks ever came in March after the Sooners played a midweek game against Kentucky on the road.

The program flew charter to the game to prevent players from missing classes and allow them to get more rest. The cost of the 30-passenger charter was $48,000.

Charter flights are common in Power 5 football and happen regularly for some major basketball programs. But most other college sports don’t get the same treatment. They fly commercial or bus to games.

OU’s method of travel to Kentucky was mentioned on the SEC Network broadcast, and donors immediately began contributing to the program.

“It was such a cool opportunity and a luxury that we have not experienced unless it was in the postseason and the NCAA pays for it,” Gasso said. “The team responded really well and it makes such a big difference for our energy level traveling that way versus traveling commercial and you are subject to weather and cancellations and delays. We were very fortunate.”

OU will be moving from the Big 12 to the SEC by the 2025 season, and its travel mileage will increase to reach most schools. Gasso expects to fly charter more once that happens.

“I already know from our AD that we will be getting opportunities for more charters in the SEC,” she said. “Certain places are hard to get into where the connection is long and hard and you have a long drive after you arrive.”

Joining the SEC will be more lucrative to Oklahoma in terms of conference payouts. In fiscal year 2021, SEC schools received an average payout of $54.6 million while the payout to Big 12 schools ranged from $34.7 million to $36.5 million.

OU’s push to raise more money for softball comes at a time when the investment in women’s sports has escalated at all levels.

OU softball players have engaged in more than 400 NIL transactions since the NCAA loosened restrictions, and the Sooners are in the process of launching the first all-female NFT drop featuring OU softball.

OU plays in front of a sellout crowd for nearly every game – home or away – and television viewership for college softball has skyrocketed.

This season’s WCWS has already set daily attendance records, and two games were broadcast on ABC over the weekend for the first time.

“One-hundred percent you want to capitalize on that. It’s easy because the level of excitement for this sport is there,” Baldwin said. “We need the TV, we need the press and we need people to understand the emotion about this sport and just the phenomenal athletes that are playing this sport on the highest level.”

Baldwin accompanied the Sooners on their trips to California, Hawaii and Kentucky this season. At each stop, OU was given celebrity-like treatment that is usually reserved for boy bands, Hollywood stars or high-profile professional athletes.

“That was a whole eye-opening situation for him to see the amount of people there and how well received we were and how largely-attended our games were,” Gasso said. “He sees we are at a different level now and is putting us in a space that is almost like a female version of what our football team experiences. That is what the expectations are for us.”

Gasso realizes the team’s success has helped pave the way for the new opportunities.

But in her 28th season leading OU, Gasso has noticed a shift in the landscape. Instead of having to largely battle alone, she has more male allies in her corner pushing for equity in resources and finances for her program.

“That is definitely something I have seen change tremendously in the last eight years or so,” Gasso said. “As our sport gets more exposure and we get more attention with the university, the men are definitely fighting for this and feeling we are deserving.”

Baldwin is one of the leaders in the clubhouse. As he watches the Sooners try to win another national title this week, he’ll be working behind the scenes to ensure they are rewarded in every way possible.

“We need to support and empower these women. They deserve it,” he said. “For what they do and all the notoriety they have given the University of Oklahoma and softball, we can’t repay them enough.”