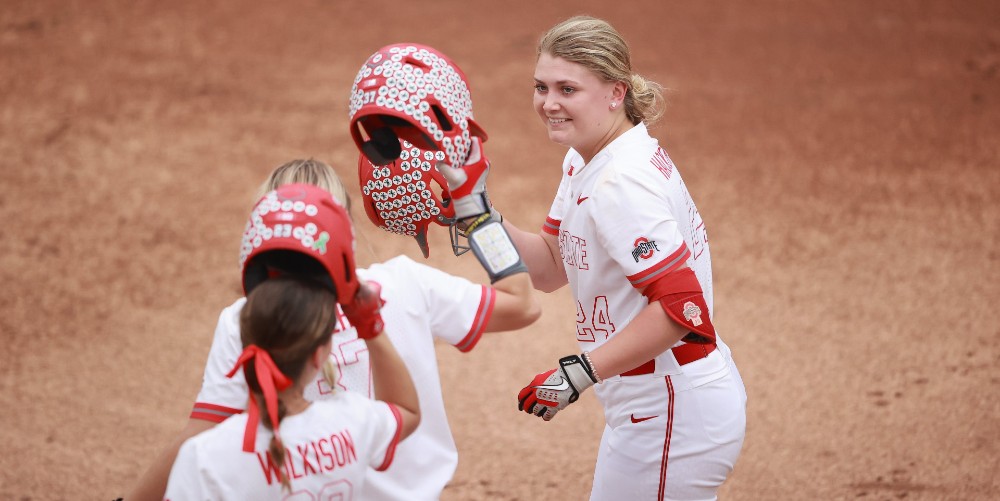 There is an emotional response nearly all parents experience when they see their child thriving in sports. For Heather Hackenbracht, it’s amplified by what her daughter endured just to get a chance to play.

Ohio State senior catcher Sam Hackenbracht was given a 50 percent chance to live after being diagnosed with cancer at 18 months old.

She spent weeks in the hospital and fought through chemotherapy treatments that wracked her tiny body with anguish. Although the doctors were optimistic from the start, Heather Hackenbracht feared the worst when she heard the odds her daughter was given.

So any time Sam hits a home run, throws a runner out trying to steal or just even steps on the field wearing a uniform, Heather counts her blessings.

“I don’t know why, but I always flash back to that little girl in the hospital bed struggling for breath,” Heather said. “I am so proud and happy for her because she didn’t have a normal childhood and she’s been able to have big moments like she’s had as an athlete.”

Hackenbracht enters her fourth season with the Buckeyes coming off a career year that showcased her blend of power and efficiency at the plate. She led Ohio State with a .377 average and finished tied for fourth in the Big Ten in home runs (16), second in RBIs (52) and third in slugging percentage (.755).

Hackenbracht did all of that despite playing with a torn labrum and bicep muscle in her right throwing arm that restricted her to the DH spot all season.

“Her entire heart and soul is about being a Buckeye. I think she would literally do anything for this team to be successful,” said Ohio State head coach Kelly Kovach Schoenly. “We thought about redshirting her last year to save her body, but she didn’t want to. She told us, ‘I want to win with these girls. I can’t let them down.’”

Hackenbracht had surgery in the offseason to repair the damage in her arm and is back behind the plate catching again while “absolutely crushing the ball” in practices, according to Kovach Schoenly.

“It took me a long time to recover and I actually started to get worried there for a while. I had a lot of pain with it,” Hackenbracht said. “But then I started doing a lot more strength stuff over winter break and really turned a corner. I feel great.”

The toughness shouldn’t be a surprise considering the medical ordeal Hackenbracht overcame during her first few years of life.

While the family was living in Beaumont, Texas, Hackenbracht was involved in a minor car accident. Her parents gave her a close inspection to make sure nothing was wrong, and noticed a lump on her stomach.

They took her to the pediatrician to get it checked. After an X-ray didn’t detect anything, the pediatrician told them to call in a few weeks if the lump didn’t go away. The lump remained, and an ultrasound and CT scan eventually revealed a mass in Hackenbracht’s abdomen.

She was immediately sent to a local pediatric surgeon, and he recommended the family travel two hours to Houston, which is renowned for its cancer treatment.

“He said to go home and pack a bag and plan to be there for a while,” Heather Hackenbracht said. “That is all they really can tell you because they didn’t know what it was.”

After receiving more tests in Houston, Hackenbracht was diagnosed with germ cell cancer. Germ cell tumors are growths of cells that form from reproductive cells. The mass in Hackenbracht’s abdomen was the size of a grapefruit and the cancer had metastasized to her lungs.

Doctors had to postpone the initial biopsy for a few days because Hackenbracht started running a fever.

“As it turns out, she was actually feverish and sick because the cancer was really hitting a critical point,” her mother said. “She was getting progressively worse because that tumor reached a point where it was just growing so fast and taking over.”

Heather and her husband, Dan, who played football at Michigan State, immediately wanted to know the odds of survival.

“They told us 50-50, and I can only tell you how much that devastated me,” Heather said. “The doctor shared the news like it was positive because they had all these great technologies and drugs and treatments. He was very optimistic, but I was confused. I didn’t think that sounded very positive.”

Hackenbracht had a central line inserted and went through four rounds of chemotherapy before having surgery to remove the remainder of the mass.

“Literally the day they started chemo she started getting better,” her mother said. “She never made it to ICU, but if she didn’t start chemo I think the conversation would have happened because she needed oxygen to support her breathing.”

Because she was so young, Hackenbracht doesn’t have many vivid memories from the experience. But she has a giant scar across her stomach as a reminder of what she went through.

“Sometimes I will forget and be in the training room and someone will comment about it,” Hackenbracht said. “It’s just something that’s been with me my entire life now. It’s just a part of me.”

Although the cancer is gone, Hackenbracht still has lingering side effects from the chemotherapy. She suffers from hearing loss, high blood pressure and lung damage. She also has Raynaud’s disease, a disorder of the blood vessels that causes tingling, numbness and color changes in her fingers and toes when it’s cold or she’s experiencing stress.

“Which is quite awful being a catcher in Ohio,” Hackenbracht said with a laugh. “My teammates think I am being dramatic, but it hurts super bad with the impact of the ball hitting or my fingers catching a pitch thrown 65 mph. It is terrible.”

There have been a few times Hackenbracht had to visit urgent care mere hours before Ohio State was scheduled to play a game. But she always shows up to the field ready to be in the lineup.

“She doesn’t talk about her cancer a lot because she doesn’t want to bring attention to herself,” Kovach Schoenly said. “But when we have things like our cancer awareness games, she can get very emotional about it. She talks about how she knows what the people are going through and she wants to help everyone not have to go through it.”

Heather Hackenbracht feels the same way any time she hears about a family dealing with cancer, especially involving a young child.

“It was pure torture for her,” she said of her daughter. “She was in pain and didn’t understand everything they were doing and couldn’t vocalize how she felt with her voice. She was just so angry at the world and just fought it hard.”

The Hackenbrachts had a strong support system in place to help them. Dan was able to take family leave from his job and Heather’s company allowed her to work remotely when she could.

“Sam was our entire focus and we took care of her the best we could,” said Heather, a chemical engineer. “I would see some parents have to literally leave their child alone in the hospital to go to work. They had no other choice. They had to be able to afford insurance and be able to pay. I can’t imagine having to say goodbye to your little kid and leave for the day to go to work.”

The Hackenbrachts remained in Texas for a few more years so Sam would have access to the same medical care. But once the regular checkups grew less common, they eventually returned to Ohio to be closer to family again.

“Part of me wonders if everything was scripted,” Heather said. “I think we wound up in Texas for my job because we have a kid that needed that medical system. That is where we needed to be.”

Hackenbracht grew to become an active child and softball became her passion. Although she initially dreamed of playing for her parents’ alma mater Michigan State, Hackenbracht realized Ohio State was an even better fit.

“I absolutely love it here,” Hackenbracht said. “It is so much more than I could have ever expected. I truly feel wanted and welcomed here.”

Hackenbracht plans to return in 2024 for the fifth year of eligibility she’s received stemming from Covid-19 cutting short the 2020 season. She wants to pursue a masters degree in education and become a teacher and a coach just like her dad.

She’s also on a similar path as her parents when it comes to marriage. They were high school sweethearts and Hackenbracht recently got engaged to her high school boyfriend, Ty Keirns, an offensive lineman at Ohio Dominican.

He proposed to Hackenbracht at Mirror Lake, her favorite spot on the Ohio State campus. They have already set a post-college softball playing date (July 12, 2024) and booked a venue (Gather at the Lakes in Ohio).

“I told her she was good enough to be an All-American last year, but you don’t always get chosen,” Kovach Schoenly said. “The great thing about Sam is doesn’t even realize how good she is. But I have been around some really good players at Ohio State and elsewhere and Sam is right up there. She is going to break records.”

Hackenbracht admits she was extremely frustrated at times last season because her body didn’t allow her to play at full strength. But given her medical history, she refuses to let anything slow her down.

“I don’t use any of that stuff as an excuse. I never have,” she said. “That is just the way I was raised.”