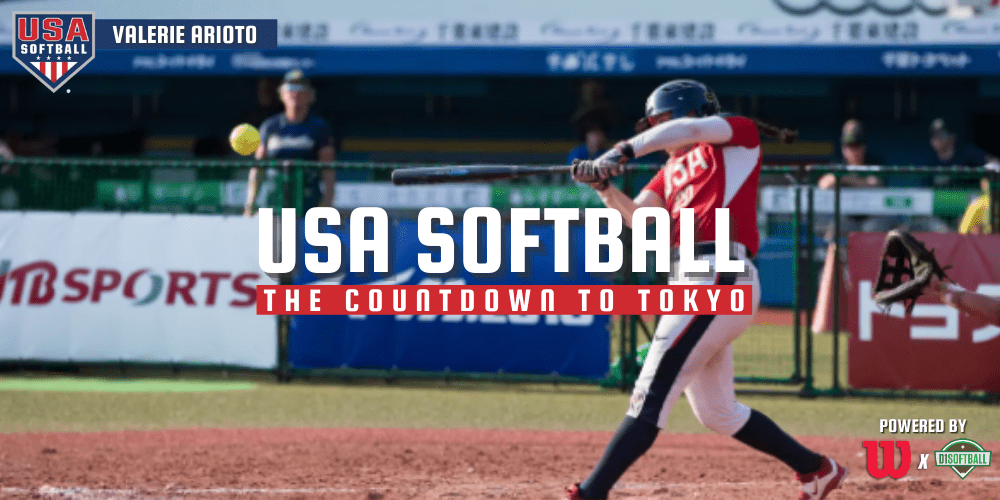 With just 15 weeks to go, we give you the #RoadtoTokyo powered by Wilson, as we feature one U.S. Women’s National Team member each week leading up to the Olympic Games.

Former Olympic Gold Medalist, Jessica Mendoza, sits down with USA Softball’s Valerie Arioto to talk about her experience with Team USA and senior writer, Rhi Potkey, with the written story.

It would have been easy for Val Arioto to walk away from USA Softball. The sport had been voted out of the Olympics with no guarantee it would return.

Other players had already left to focus on playing in the professional leagues or to pursue careers outside of softball.

But Arioto still enjoyed competing and took great pride in representing the United States in any championship event.

That drive kept her going despite not receiving any training stipends and having to juggle multiple jobs to make ends meet.

“For me, it was always about wearing USA across my chest,” Arioto said. “Obviously, I wanted to play in the Olympics. But it was more about putting on that uniform and being able to represent so much more than just myself and doing it with people I really enjoy doing it with.”

Arioto didn’t know if she’d ever get a shot at Olympic glory until her dreams changed with the news that softball would be back for the 2020 Tokyo Games.

She knew loyalty alone wouldn’t guarantee a spot on the U.S. roster, but it was a sweet reward once the former Call All-American was selected to the team.

It made all the hustle to stay with Team USA worth it, whether it was teaching elementary school P.E., conducting camps, playing overseas or serving as the Director of Operations for the University of South Florida softball team.

“It could be difficult not getting paid and having to figure out how to piece together different jobs and all of that. But it wasn’t too much sacrifice for what the reward is,” said Arioto, who turns 32 in April. “Now it has come full circle and I have learned so much about the sport through all the ups and downs. I wouldn’t have done it any other way.”

Having the Olympics postponed by a year could have felt like a cruel joke for Arioto after such a long wait. But she was determined to use the delay for good.

She started her own business, “The Integrated Vault,” which focuses on self growth. The company officially launched in October

“Everyone talks about how so much of the game is the mental side, but there is never really training in it,” Arioto said. “It’s really important to take care of ourselves to be our best selves out on the field.”

Arioto’s fiancé Danny, gave her the nudge she needed to get the business going.

“He was extremely encouraging,” she said. “I honestly didn’t realize that there was a big need, but teams have been wanting to do group calls or incorporate the lessons for team chemistry. It’s been really rewarding to be that person that can be a mentor. That fires me up when people have success and can figure things out for themselves.”

Arioto’s love for the sport runs deep, and she wants to help the sport grow in the future. Not only does she play for Team USA, but she serves on the USA Softball Board of Directors.

“I want to create other opportunities so players can play after college and get paid what they deserve for all the hard work they put in,” Arioto said. “Hopefully in the end after I am done playing I can continue to serve on the USA Softball Board of Directors and change that path for the next generation to come.”

The younger players on Team USA respect Arioto for all she has already done in the sport and the mentorship she provides on a daily basis.

“The thing that really sticks out is how much she loves USA Softball and how she has always been there and stuck it out,” said USA teammate, Delaney Spaulding. “It’s been 10-plus years now and they had zero funding during that time, so I think that shows the character that she has and where her heart actually is. She loves this game so much and wants to represent her country on the biggest stage.”

Arioto’s role on Team USA has always gone beyond just her statistics. Nothing has changed in the build up to the Olympics.

“As someone with experience, I try to be open ears so someone feels they can come to talk to me,” she said. “Building those relationships and bringing the energy to the team is very important to me. I want to bring joy even during those grinding hours. That energy can be really contagious.”

Given all that has transpired in the last year during the pandemic, Arioto is trying to stay in the moment. Her road to the Olympics never had a map. It emerged suddenly and has featured many twists and turns.