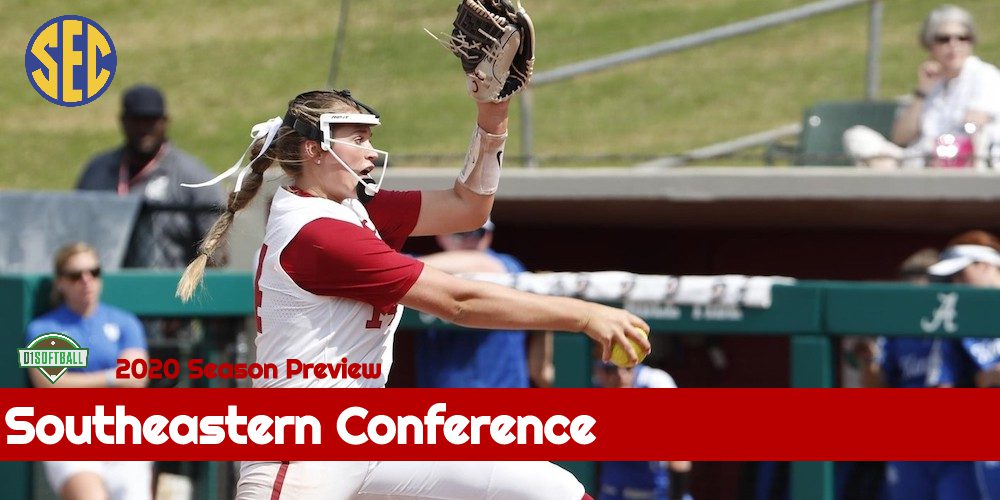 The Crimson Tide aren’t just projected to be No. 1 in the SEC, they will be ranked the No. 1 team in the nation by D1Softball to start the season. The defending SEC champions are loaded in the circle, with Montana Fouts, Sarah Cornell and Krystal Goodman returning and freshman Lexi Kilfoyl joining the squad. Fouts was SEC Freshman of the Year last season after accumulating 21 wins, 193 strikeouts and posting a team-leading 1.39 ERA. Cornell was named SEC Pitcher of the Year and Goodman finished 11-1 with a 1.63 ERA. Kilfoyl is a USA Softball Junior National Team member. Senior slugger Bailey Hemphill returns, having hit 26 home runs while batting a team-leading .375 last season as the Crimson Tide reached the Women’s College World Series for the 12th time in program history. Alabama is likely fielding the fastest team in program history, led by Oregon transfer Alexis Mack. The Crimson Tide will be aggressive on the basepaths, trying to force teams into mistakes knowing they have a security blanket in the circle to protect any lead. Alabama won’t be ducking competition to try and stay at the top. The Crimson Tide have put together an impressive non-conference schedule that includes Florida State, UNC, Washington, UCLA, Oklahoma State, Arizona, Texas and an exhibition game against the United States Olympic team on March 31 at Rhoads Stadium in Tuscaloosa. Alabama will also host the SEC Tournament May 6-9. The last time the Crimson Tide hosted the tournament in 2012, they won the title.

By the end of her freshman season last year, Ashley Rogers emerged as the ace of the Lady Vols staff. The right-hander will be asked to play an even greater role this season as the lone returner on staff. The Lady Vols must replace Matty Moss, who graduated, and Caylan Arnold, who transferred to Florida State. Rogers finished her rookie campaign 21-7 with a 1.94 ERA and 209 strikeouts. Tennessee is hoping a similar breakout is possible for freshman pitcher Callie Turner, a USA Softball Junior National Team member. Chelsea Seggern returns as the infield anchor for the Lady Vols. The senior batted .366 with 46 RBIs last season. Catcher Ally Shipman has recovered from injury after having her freshman season cut short when she suffered a torn ACL and broken wrist in a violent collision last year. The Lady Vols will need to find a spark at the top of the lineup to replace graduated senior Aubrey Leach, a tonesetter who was one of the toughest outs in the country. Tennessee’s freshman class includes Kiki Milloy, the daughter of former NFL Pro Bowler Lawyer Milloy and younger sister of former Washington outfielder Amirah Milloy. Sophomore Gracie Osbron recently left the program before the end of the semester.

The Gators are looking to reload after losing All-American pitcher Kelly Barnhill and All-American outfielder Amanda Lorenz to graduation. There is no way to fill those voids, but Florida has a track record of producing consistently successful teams no matter the circumstances. Although the Gators had a down season by their standards in conference play last season – finishing 12-12 – they still managed to win the SEC tournament title and reach the Women’s College World Series for the 10th time in the previous 12 years. Freshman left-hander Rylee Trlicek, a member of the USA Softball Junior National Team, joins a Gator staff that includes junior Natalie Lugo and sophomore Elizabeth Hightower. The Gators are hoping to produce more offensively this season after finishing last in the SEC with a .264 team batting average. Senior Kendyl Lindaman (.330) returns as the leading hitter. Redshirt senior shortstop Sophia Reynoso anchors an infield that added sophomore transfer Charla Echols from Michigan State. Florida’s first home game in Katie Seashole Pressly Stadium is an exhibition on Feb. 11 against the United States Olympic team.

If you are going to lose two all-around stalwarts and exceptional leaders like Katie Reed and Abbey Cheek to graduation, it helps to return your entire pitching staff. Kentucky has all five pitchers back this season, led by junior Grace Baalman and senior Autumn Humes. Senior second baseman Alex Martens and sophomore catcher Kayla Kowalik return. Martens batted .310 with 13 home runs last season while Kowalik hit .357 with 49 runs scored.

Just like football, the Ole Miss and Mississippi State softball programs have endured head coaching changes this season. Mississippi State fired Vann Stuedeman last July and promoted assistant coach Samantha Ricketts to head coach. Meanwhile at Ole Miss, head coach Mike Smith resigned in December. Smith was put on administrative leave in November for an external audit of the softball program, stemming from “cultural” concerns surrounding the program. Associate head coach Ruben Felix has been named interim head coach for this season. Smith led Ole Miss to four NCAA regional berths and two Super Regional berths in his five seasons. How does the upheaval impact chemistry at Ole Miss? How quickly can both programs adapt to the changes? It may not lead to as many quirky moments as Mike Leach and Lane Kiffin are sure to produce in football, but it’s something to watch as the softball season progresses.