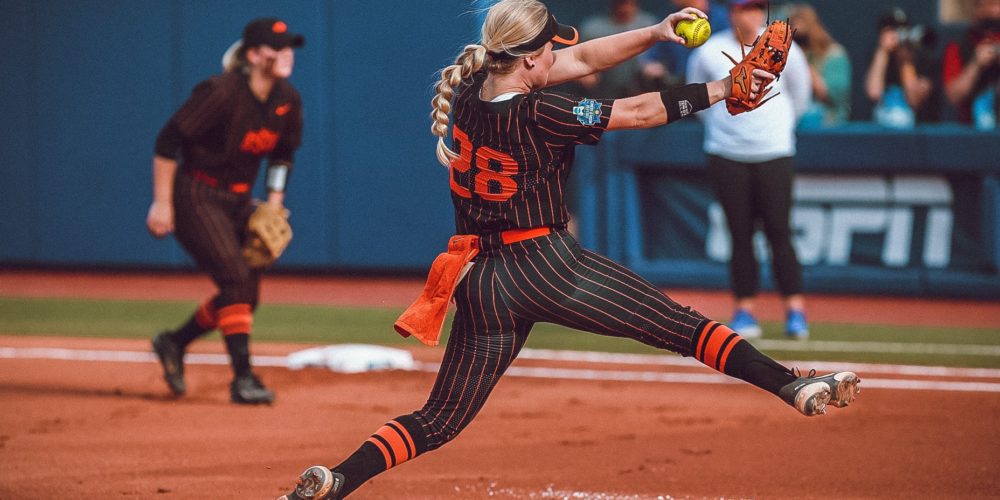 At Her Own Speed: Oklahoma State’s Kelly Maxwell Makes Her Case as Nation’s Best

Weeks before a pandemic brought the 2020 season to an abrupt conclusion, Oklahoma State’s Kelly Maxwell started against Team USA in an exhibition in Clearwater, Florida. Then a redshirt freshman, the left-hander had pitched all of 14.1 competitive innings before facing the lineup of Olympians.

Assisting Team USA during its pre-Olympic tour that year, but also Maxwell’s longtime pitching coach in Houston, Kyla Holas watched from the national team’s dugout. As she recalls events, USA leadoff hitter Haylie McCleney needed one look to “pick” Maxwell’s offspeed pitches and share the scouting report with teammates. Maxwell competed. She kept a superior foe off the scoreboard. But deprived of an important tool, she also walked three batters and exited after two innings.

After the game, Holas texted her pupil to let her know about the pitches getting picked. Far from sounding crestfallen or ticked off, Maxwell reacted in much the same way you would expect of a mechanic who locates the source of a perplexing rattle.

Oh, so that’s why that pitch wasn’t working.

“She’s so eager to be the best, that somebody telling her to make an adjustment doesn’t derail her,” Holas said. “It’s just one of those things where she says, ‘Add it to the list and let’s get on it.’”

That encounter was before most of the softball world knew who Maxwell was. Before she emerged as the shutdown pitcher who has controlled the tournament to a greater degree than any of her peers. It also explains quite a bit as to how she became the pitcher whose team is one win away from playing for a national championship for the first time in the program’s 10 NCAA World Series appearances. In a sport that increasingly glorifies speed, whether the velocity of pitches or the immediacy with which success arrives, Maxwell is living proof that the best stories often unfold at their own pace.

“It’s turned her into one of the best left-handers in the world, pure and simple,” Oklahoma State Kenny Gajewski said in relation to Maxwell’s penchant for patient and steady self-improvement. “It’s really cool when you can have as much success as she had last year, and she can walk in and go, ‘Yeah, I’ve got to keep getting better.’”

Some freshmen arrived readymade for stardom. Cat Osterman was when she showed up in Austin in the 2002 season. Dallas Escobedo pitched Arizona State to a national title in her 2011 debut. This season, not so very far from Stillwater, Oklahoma’s Jordy Bahl took the sport by storm with a unique mix of youthful energy and veteran technique.

Maxwell represents the more commonly tread path, even if the former prep All-American was considerably more than just another recruit. She wasn’t an immediate success at Oklahoma State. With eventual ace Samantha Show newly ensconced as a transfer entering the 2019 season, Kenny Gajewski approached the freshman about redshirting, rather than waste her eligibility with a handful of inconsequential innings. By the end of that year, the progress was so labored that coach and pitcher had a frank conversation.

“If we can’t get some changes made,” Gajewski recalled telling her, “I’m not sure you’re going to be good enough to pitch here.”

As with the text message about Team USA picking her pitches, being told she needs to change something has never bothered her.

When Holas, the former University of Houston head coach, started giving full-time pitching lessons through her More Than a Game facility in Houston, the teenage Maxwell was one of the first customers through the door. At that point in time, the southpaw could throw harder than most but struggled to do much more than make the ball arrive in a hurry. Yet there wasn’t any attachment to speed for speed’s sake, a not uncommon battle of wills that Holas contests with young pitchers who grow up watching broadcasts in which often dubious radar gun speeds are ubiquitous.

Maxwell just wanted to be better. To learn. So, when Gajewski challenged her and new Oklahoma State pitching coach John Bargfeldt laid out a plan, she went back to Houston and got to work with Holas.

“The common theme with her whole situation is that such great conversations were being had behind closed doors,” Holas said of the message from Stillwater. “The honesty and the clarity was always there. She always knew where she stood, she always knew what she wanted to work on. It was just about going and putting the time in.”

She worked on tunneling and making her pitches more difficult for hitters to spot. As ESPN’s Amanda Scarborough demonstrated during Saturday’s victory against Florida, reworking her windup and keeping the ball in her glove longer. She continued to work on her offspeed pitches, a lifelong project to master the movement that makes her curve and changeup, with its dropping action, so difficult to lay off and nearly impossible to hit.

“I think just going after what I know and what I do best and that’s just spinning the ball,” Maxwell said of the roots of success. “It doesn’t take velocity to win at this level. So just being able to effectively spin the ball with my rise and my offspeed, and then get those hitters’ timings off. Just taking that and using my competitive nature.”

She went from the redshirt season to pitching 46.1 innings in the truncated 2020 season. Then it was 116 innings as the ostensible No. 2 alongside Virginia Tech transfer Carrie Eberle in 2021. Then it was sharing starts and innings almost equally with Texas transfer Miranda Elish, even as Maxwell posted some of the best numbers in the nation in ERA, WHIP and strikeout rate.

And finally, after the unfortunate injury that has limited Elish to hitting duties, Maxwell took over as the sort of old-school workhorse ace that, though a vanishing breed, remains the stuff of softball lore.

“Every time somebody new was brought in through the portal,” Holas said, “I think a lot of people were like ‘Oh, poor Kelly.’ But she was like ‘Screw it, I love it. That’s more competition. That’s more relief that I’m going to have.’ That was never a bother to her.”

Beginning with the Texas series, she pitched 75.1 innings in 44 days, compiling 1.30 ERA despite making three appearances against Texas, three against Oklahoma, two against Clemson and one each against Florida State and Arizona.

In times of plenty, it’s easy to imbue her famously stoic demeanor with a narrative of cool confidence. In reality, it’s just her. The poker face was the same as a teenager working with Holas. It was the same when she dominated high school hitters and when she struggled during her redshirt season. It was the same during those days that all pitchers have. Those days when, as Holas put it, you hate pitching.

If she could have disguised her pitches as well as she hid her emotions, the whole process might have been considerably easier.

“I just think inside I’m competitive,” Maxwell said. “It doesn’t differ from me or [the more demonstrative Morgan Day]. I just think we both go out there and compete and give it our all. I’m just not one to show it. I’ve never really been like that ever since a young age. It doesn’t change what I’m doing in the circle and how I attack the hitters.”

But that poker face also hid the final part of the process. Almost a year and a half after she faced Team USA in that Clearwater exhibition, Maxwell faced the Olympians again, this time as part of an all-star team of collegians representing The Alliance Fastpitch in a series last summer.

What stuck with McCleney, the same hitter Holas recalled getting a read on the lefty, was the ownership Maxwell took in her pitches during the second meeting. The offspeed pitches were second nature, mechanically and in the willingness to throw them to the best hitters in the world.

“Everything looked the exact same out of her hand, and her presence and confidence made all the difference,” McCleney said. “She believed in what she was throwing!”

To Holas, watching those games with Maxwell’s dad, it was the pitcher putting the final brick in place.

“That was the moment that I saw a different person,” Holas realled. “It was finally that all-the-years-paid-off moment of ‘I can get the best of the best out.’

“I was standing there with her dad and it was just like ‘Who is this person standing on the mound, bowing up and going at them and not having a care in the world?’ It was really awesome to see. That’s the moment that you see this person, which is why I think this year happened. That confidence just finally turned on.”

The finished product was very much worth the wait.