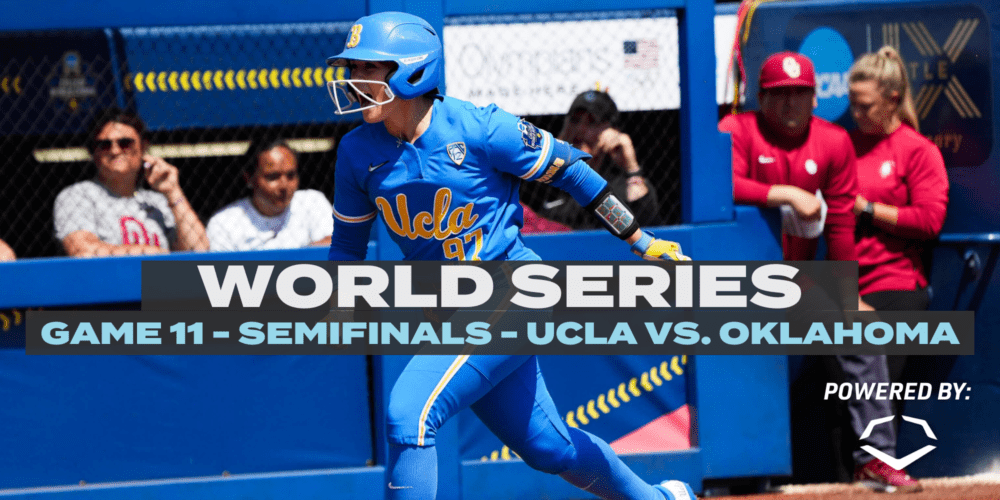 UCLA knows nearly the entire country expected a preordained passage to the championship series for top-ranked Oklahoma at the Women’s College World Series.

The 12-time NCAA champions issued a reminder they remain a prominent program.

Behind two home runs from Maya Brady, UCLA outslugged the defending champion Sooners to beat Oklahoma on Monday afternoon and force a winner-take-all second semifinal game with a ticket to the championship series on the line.

The rematch will be played in 30 minutes at USA Softball Hall of Fame Stadium in Oklahoma City.

UCLA (51-9) delivered Oklahoma (56-3) only its third loss of the season, joining fellow semifinalists Texas and Oklahoma State as Sooner beaters.

All the runs scored in the game came via home runs as the teams staged a power display for another packed stadium crowd.

Oklahoma opted to start Nicole May for the first time in this year’s WCWS, while UCLA went with Megan Faraimo.

UCLA was successful against May last season in the WCWS – scoring three runs in 2.0 innings – and the Bruins jumped on her from the start again on Monday.

Kinsley Washington led off the first inning with a walk, and Delanie Wisz sat on a change-up and belted a two-run home run over the left field fence for a 2-0 UCLA lead that quieted the largely pro-OU crowd.

It marked just the fourth time Oklahoma has trailed in a game this season, and the second time in the WCWS.

The Sooners had an immediate response as Jayda Coleman led off the bottom half of the first with a solo home run to center.

Brady expanded UCLA’s lead again. After Bri Perez and Wisz got on base with no outs in the third inning, the redshirt sophomore stayed hot in the postseason and hit a three-run home run to dead center that chased May from the game.

Jordy Bahl entered the circle for the Sooners. The freshman sensation made a brief relief appearance in OU’s opening game last Thursday to get her feet wet on the big stage after missing three weeks with forearm soreness.

Bahl looked strong for the first few innings, holding the Bruins scoreless as Oklahoma tried to mount a comeback.

Grace Lyons closed the gap for the Sooners with a two-run home run to left in the fourth inning to cut UCLA’s lead to 5-3.

UCLA pulled Faraimo in the fifth and inserted redshirt senior Holly Azevedo, who had thrown a two-hit shutout against Florida in a run-rule win on Sunday.

Azevedo immediately came through in a big spot with two outs, a runner on base and Jocelyn Alo at the plate. Azevedo shook off the pitch call from the dugout and struck out the NCAA career home run leader swinging on a change-up low and away.

Brady put the capper on the UCLA victory in the seventh, going low to send an opposite field two-run home run to left as the small pocket of UCLA fans went wild.

The Sooners pulled Bahl and re-inserted May as they prepared to play another game against the Bruins. Bahl gave up two runs on two hits with four strikeouts and two walks in 4.2 innings.

Brady was due for a power surge and she delivered. Brady belted her 14th and 15th of the season. She hit a three-run home run in the third and a two-run shot in the seventh. Brady finished 2 for 4 with five RBIs to prolong her successful postseason.

Wisz passed former UCLA All-American Rachel Garcia for the second most RBIs in a single postseason in program history with 17. Samantha Camuso is the leader with 21 in 2010.

No. 1 Oklahoma and No. 5 UCLA meet again in 30 minutes in a winner-take-all second semifinal game with a ticket to the championship series on the line.

〈
Previous Article WCWS Semifinals: Alo Blasts No. 1 Oklahoma Back into the Championship Series
Next Article At Her Own Speed: Oklahoma State's Kelly Maxwell Makes Her Case as Nation's Best
〉