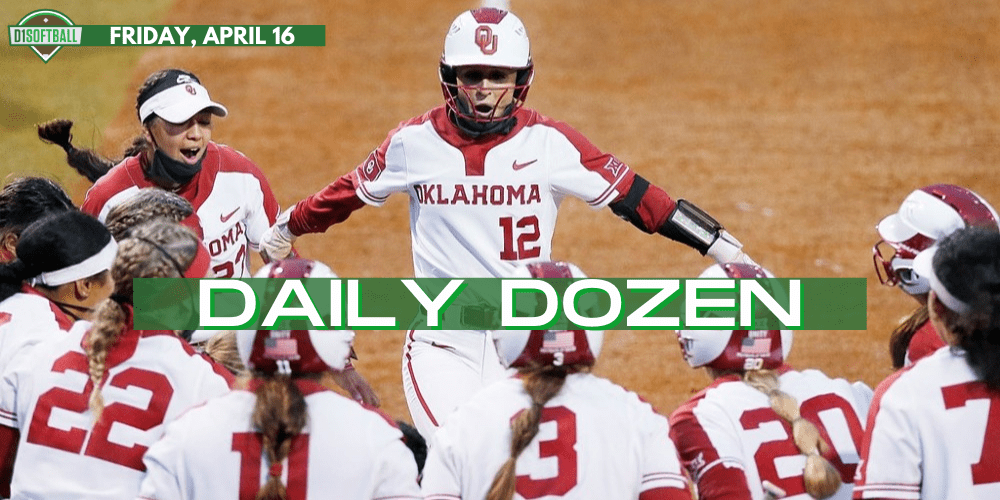 1. Oklahoma wants to put to rest that whole “too rested and untested” idea floating around. The No. 1 Sooners are a historically great offensive team, and they dominated rival Texas in the series opener. Behind three more home runs and a three-hitter by Giselle Juarez, Oklahoma (31-0, 7-0) run-ruled the No. 11 Longhorns 11-1 in five innings. After Juarez struck out the first three Texas batters of the game, Tiare Jennings and Jocelyn Alo hit back-to-back home runs in Oklahoma’s first two at-bats to set an emphatic tone. The Sooners run-ruled Texas for the first time since April 19, 2014, and has won 19 straight over Texas, with its last loss to the Longhorns coincidentally enough coming just a day before that run-rule win (April 18, 2014). The Sooners have won 50 straight Big 12 regular-season games.

2. The loss on the scoreboard would have been bad enough to handle. But the potential loss of another key player made No. 3 Alabama’s 2-0 setback to No. 4 Florida even more wrenching. Graduate senior shortstop Claire Jenkins was helped off the field in the fourth inning after injuring her right knee while planting to throw. Jenkins missed last season with a torn ACL in her left knee. Earlier this season, Alabama freshman infielder Bailey Dowling suffered a torn ACL. Jenkins returned to the dugout later in the game on crutches. Florida’s Elizabeth Hightower threw a three-hit shutout and Sarah Longley hit a two-run single to lead the Gators to the win.

3. That’s a good answer, Northwestern. Swept a week ago by Minnesota, the Wildcats beat Iowa 7-0 in Friday’s series opener behind a Danielle Williams perfect game. Williams needed just 90 pitches to get through seven innings — that after throwing 298 pitches in two appearances against the Gophers (pitching into extra innings on one occasion). At the plate, Rachel Lewis and Jordyn Rudd combined for seven of Northwestern’s eight hits and drove in five runs.

4. The Pac-12’s top pitchers showed exactly why they have that status. UCLA senior Rachel Garcia threw a no-hitter with 12 strikeouts in a 7-0 win over Oregon State. Perhaps the most surprising aspect? It was only the second no-hitter of Garcia’s college career (it was the 115th in UCLA history). In Seattle, Gabbie Plain struck out 12 in a two-hit shutout to lead the Huskies to an 8-0 run-rule win over Oregon.

5. Keely Rochard allowed seven home runs in 452 at-bats entering Friday’s game against Georgia Tech. She gave up two home runs in three at-bats to Emma Kauf. Which is why while this hasn’t yet been a season to remember for the Yellow Jackets, Friday’s 6-4 win against No. 14 Virginia Tech aside, they know they have a budding star for the future. Rochard struck out 12 batters in the series opener in Blacksburg and allowed just four hits to batters not named Kauf. But the second-year freshman hitter got the best of one of the best aces around in a 3-for-3 day with three RBIs. She’s hitting .376 with eight home runs and a team-high 70 total bases this season.

6. But Rochard and Virginia Tech weren’t the biggest Goliath to fall against an unranked David on Friday. Not that Auburn probably appreciates being cast as an underdog. But the Tigers were 3-9 in the SEC and unranked before adding to that win total in Friday’s series opener against No. 12 Kentucky. Shelby Lowe went the distance in the circle in the 5-3 win, her second win in three days after a midweek victory against Georgia State. Fifth-year outfielder Alyssa Rivera hit her first home run of the season and drove in three runs.

7. The MAC has no answers for Miami’s Courtney Vierstra at the moment. Certainly no answers on how to beat her. In fact, they can barely get on base against her. Vierstra came within a seventh-inning single of a perfect game in Friday’s win against Buffalo. She had to settle for a one-hit shutout with 17 strikeouts. That would have been her second perfect game — and third no-hitter — in the past eight days. Her totals so far in April: 23.1 IP, 4 H, 0 ER, 49 K.

8. History was made when No. 20 Wichita State and No. 23 UCF squared off in Orlando. It marked the first game in American Athletic Conference history between Top 25 teams. UCF entered the series fresh off a midweek victory over No. 4 Florida to sweep both games against the Gators this season. But Wichita State dominated the Knights, with redshirt senior Bailey Lange throwing a one-hit shutout in a 7-0 win. The lone hit Lange allowed grazed off her glove into the hole between short and third base. Wichita State has won 11 straight, which is tied for the second longest in school history.

9. LSU took the field on Friday against NC State with heavy hearts after the passing of Doug Gorsuch, the father of senior pitcher Maribeth Gorsuch. The Tigers wore “DG” decals on their helmets in his honor and hung Maribeth’s No. 6 purple jersey in their dugout. Via Twitter, Maribeth said, “He will have the best seat in the stadium from here on out.”

10. NC State rallied to beat LSU for the first time in program history to open the series. Trailing 1-0 in the sixth inning with just one hit, the Wolfpack appeared to score the tying run on a squeeze bunt. But the call was overturned and the runner was called out for running outside the baseline to avert the tag. Logan Morris made sure it didn’t matter. She belted a 3-run home run in the very next at-bat to give NC State a 3-1 lead that stood. Abby Trahan threw a complete game three-hitter for the Wolfpack.

11. Madyson Watson had a bit of a rough Tuesday, so we can assume the Winthrop pitcher was eager to get back in the circle and get back to winning ways. No matter how long that took. Watson went all 12 innings Friday in Winthrop’s 2-1 win against Big South leader USC Upstate. That came after the fifth-year pitcher allowed nine runs in Tuesday’s loss against Clemson. Friday, she struck out nine and allowed just five hits in the equivalent of nearly two complete games. Update’s Savannah Brown also threw every pitch for her team.

12. This isn’t the sort of ICYMI that it’s any fun to recount, but Detroit Mercy announced Thursday that it is officially canceling the remainder of its season. Detroit cited insufficient players related to the ongoing COVID-19 pandemic. The Titans hadn’t played since splitting four games against Robert Morris on March 12 and 13. Those back-to-back doubleheaders turned out to be their only games of the season. On the field in the Horizon League, first-place Youngstown State (25-9, 18-4) won both ends of Friday’s doubleheader against second-place Oakland.

BONUS: Marvel at this play by Oklahoma’s Nicole Mendes to nail the runner at second.