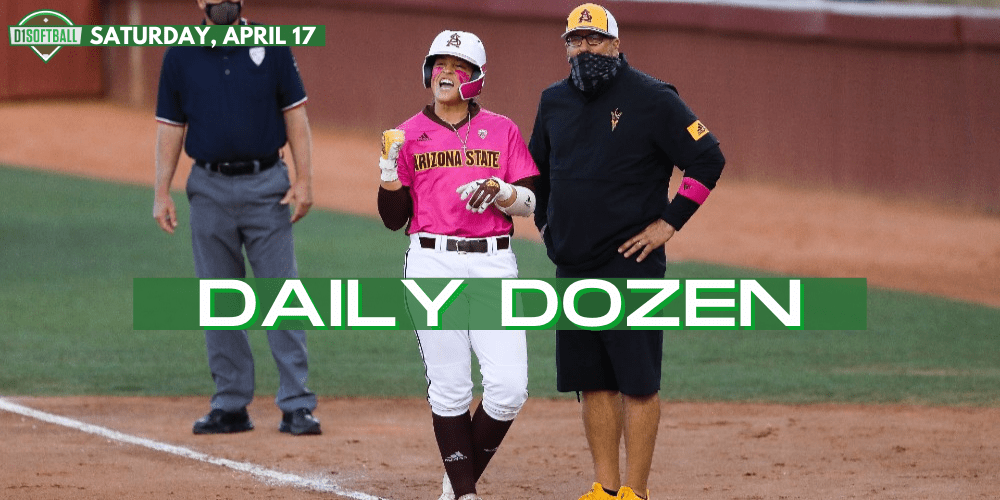 1. Arizona State clinched its first series win against Arizona since 2015, and then promptly suffered its largest margin of defeat this season in the nightcap. So make what you will of Saturday’s games in Tempe. The Sun Devils will say with merit that they won the game that mattered, Allison Royalty and Lindsay Lopez combining in the circle to scatter eight Arizona hits. Sun Devils shortstop Alynah Torres hit two home runs and drove in four to upstage counterpart Jessie Harper, who hit her 86th career home run. But Arizona secured some redemption with a 15-1 win in the game that doesn’t count toward the Pac-12 standings. And overall for the day, Hannah “Peanut” Martinez went 3-for-5 with three RBIs as the replacement for injured Alyssa Palomino-Cardoza. Mixed results were also the case in Seattle, where Washington clinched the Pac-12 series against Oregon behind Gabbie Plain but then dropped a 10-1 decision to the Ducks in the non-conference game.

2. Oklahoma has turned an anticipated series showdown into a beat down. The No. 1 Sooners (32-0) run-ruled rival Texas in five innings for the second straight day to clinch the Big 12 series. Lynnsie Elam was 3 for 3 with a double, home run and three RBIs in the 10-2 win. Oklahoma had “only” two home runs, which could be considered a moral victory for Texas considering the potency of the Sooner offense. Oklahoma has won 20 straight games over Texas and 51 straight Big 12 regular-season games.

3. Florida took advantage of Alabama mistakes to blow Game 2 wide open late and clinch the series with an 9-2 win at Rhoads Stadium. Alabama’s Sarah Cornell was trying to intentionally walk Florida’s Julia Cottrill in the fifth inning and threw a wild pitch that went under the legs of catcher Bailey Hemphill to allow the Gators to score the go-ahead run for a 3-2 lead. Florida added plenty of insurance runs in the sixth thanks to more Alabama errors in the field. Kendyl Lindaman had the biggest blow with a grand slam. Lexi Kilfoyl was unavailable to pitch for Alabama because of “nagging injuries.” Krystal Goodman got the start for the Tide and was charged with her first loss of the season. Cornell and Jaala Torrence pitched 1.1 innings each in relief. Only three of Florida’s runs were earned as the Tide made three errors and threw four wild pitches.

4. Less than 24 hours after her teammate threw a no-hitter in a 7-0 win over Oregon State, UCLA’s Megan Faraimo nearly matched Rachel Garcia. Faraimo notched a career-high 17 strikeouts and allowed just one hit in a 7-0 victory over the Beavers to clinch the series for the No. 2 Bruins. Faraimo struck out all three batters in the first, fourth, fifth and seventh innings.

5. That is one way to get your coach to let you finish the game. Autumn Pease went the distance while throwing a no-hitter in Minnesota’s 2-0 win in the first game of a doubleheader against Nebraska. That came just days after we talked about how rare it is for Minnesota pitchers to throw complete games, instead often working in tandem. Pease finished in style, getting a pitch in on Tristen Edwards’ hands to coax a game-ending pop out. She only needed 84 pitches for her first no-hitter. The Gophers then reverted to form in the nightcap, letting Ava Dueck close out the last inning of a 9-0 win after Amber Fiser dominated the first five innings.

6. Long Beach State scored three runs in the top of the seventh inning to beat UC Santa Barbara. Cal State Fullerton allowed three runs in the bottom of the sixth inning to lose to UC San Diego. And just like that the Big West lead changes hands. Suzy Brookshire was the force propelling Long Beach into first place with a 13-1 conference record. Her two-run home run set the big seventh inning in motion against UCSB and capped a day that saw her go 5-for-7 with three RBIs. Long Beach and Fullerton (11-1 in conference) meet the final weekend of the regular season.

7. It’s certainly not an Oklahoma-level whupping, but No. 20 Wichita State has turned another of the week’s signature series into a one-side affair. Wichita State swept Saturday’s doubleheader at No. 23 UCF, winning 3-0 and 5-2. That’s on top of winning the opener Friday. UCF did get the tying run to the plate in both of Saturday’s games, but the Shockers also didn’t allow a run in the first 18 innings of the series. Coming off another midweek win against Florida, UCF managed just five hits in 14 innings during the doubleheader. Oh, and Kaylee Huecker can play some defense.

8. It’s not that 2018 was that long ago in the grand scheme of things, but three years is a long time for an SEC team to go without winning a conference series at home against a ranked team — when seemingly every conference series in the SEC is against a ranked team. But Auburn clinched its first such series since 2018 with a 4-2 win against No. 12 Kentucky. Auburn pitching was superb for the second day in a row, freshman Maddie Penta going the distance for her best SEC performance. Two dicey calls in the seventh inning didn’t cost Kentucky the game, but they did prevent Kayla Kowalik from getting to the plate with a chance to tie the game on a day when she went 2-for-3 with a home run. Those calls also led to Rachel Lawson making an early exit after an ejection.

9. Is it the first ever perfect game for someone wearing No. 99? Honestly, we’re not entirely sure how to research that, but we’re willing to say Longwood’s Sydney Backstrom went where few have gone before. Backstrom was indeed perfect in Longwood’s 7-0 win against Presbyterian. Backstrom complete her work despite Presbyterian’s leadoff batter in the seventh trying to bunt for a hit, a tactic sure to fire up the “unwritten rules” debate. Backstrom struck out nine in the win. Unfortunately for Longwood (20-21, 9-5), which is chasing Campbell and USC Upstate in the Big South, Presbyterian bounced back to win the second game.

10. Only two pitchers in Division I won more games than George Washington’s Sierra Lange in 2019. Saturday, for the first time in her career, no pitcher in Division I allowed fewer hits. The Colonials ace pitched a five-inning no-hitter in her team’s 8-0 win in the opening game of a doubleheader against Saint Joseph’s. It’s the fifth no-hitter in program history and first for Lange. And while it was a solo effort, she got help from a fellow pitcher. Faith Weber, in the lineup for the game, hit two home runs and drove in six runs. George Washington swept the doubleheader after Jenna Cone and Jessica Linquist each hit a pair of home runs in a 16-6 win. Cone now has 67 career home runs, four shy of all-time the top 25.

11. It’s always best to expect something wild and wacky to happen when South Carolina hosts Tennessee. The series opener on Saturday in Columbia delivered in bunches. Tennessee entered the seventh trailing 2-0, having been no-hit by South Carolina’s Karsen Ochs until the sixth. But Chelsea Seggern and Ivy Davis led off the 7th with back-to-back home runs to tie the game 2-2. The bottom of the 8th is when things really got bizarre. South Carolina was an inch away from a walk-off two-run home run by Kassidy Krupet, but the ball hit off the top of the wall and stayed fair. Tennessee starter Ashley Rogers intentionally walked the bases loaded with no outs, but the Gamecocks were called for a lineup card error and docked an out. After another intentional walk to re-load the bases, Riley Blampied hit a pop foul near the on-deck circle. Tennessee fist baseman Ashley Morgan and catcher Josie Willingham collided in an attempt for the ball. Morgan made the catch for the second out while toppling over Willingham, but South Carolina’s Maddie Gallagher scampered home from third for the walk-off winning run. South Carolina has won four straight over Tennessee, with three coming in walk-off fashion.

12. Given all the big series showdowns this weekend, it’s easy to overlook the one between Texas State and Louisiana. The teams split a doubleheader on Saturday, with Texas State winning the first game 5-1 before the Ragin’ Cajuns responded swiftly with four runs in their first at-bat of the nightcap for a 7-3 win. The rubber match is Sunday, when Louisiana will try to stretch is nation-leading streak of consecutive conference series won to 62 straight dating back to March 2013.

BONUS: Just call her “Air Kiley.” Junior Kiley Naomi showcased her hops with this sensational play. (She also went 6 for 7 with three RBIs as the Cowgirls swept a doubleheader over Baylor.)