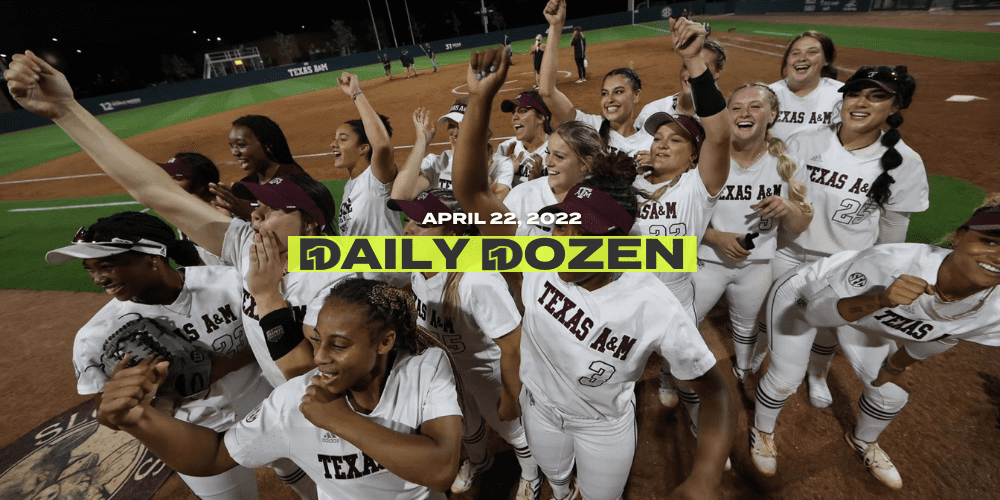 Use CODE: 22Season for 20% OFF an Annual Subscription

1. A&M rallies to upset Alabama. It’s been a rough few seasons in SEC play for Texas A&M. But the Aggies had to feel some elation after upsetting No. 2 Alabama 6-4 in the series opener in College Station. It was A&M’s highest-ranked SEC regular-season win since beating No. 1 Florida in 2016. The loss dropped Alabama (38-7, 13-6) further behind Arkansas (33-8, 12-4) in the race for the SEC regular-season title. Alabama scored four runs in the third to take a 4-1 lead, seemingly plenty of support for ace Montana Fouts. But A&M (25-17, 4-12) took advantage of a Tide error in the bottom half to narrow the deficit to 4-3. Trinity Cannon put the Aggies ahead for good in the fifth inning with a two-run double. Makinzy Herzog launched A&M into the early lead with a first-inning home run and earned the win in the circle. Herzog threw 2.0 innings of hitless relief while freshman Emiley Kennedy secured the save with two more scoreless innings. Freshman Koko Wooley was a spark for A&M, going 3 for 3 with two runs scored. Haley Lee didn’t get a hit against Fouts, but used two walks to score two runs. Fouts (19-4) went the distance for the Tide, allowing four earned runs on six hits with 11 strikeouts and three walks. A&M is trying to earn its first SEC series win of the season, and having it come against Alabama would surely be a confidence booster.

2. Florida State clinches series against Clemson. Sometimes there is such a thing as too much drama. And by the end of Friday’s game, it felt like the protagonists had squeezed about a dozen plot lines into No. 4 Florida State’s 7-6 comeback win against No. 17 Clemson.

What will grab the headlines is the controversy that led to Florida State’s final run. Trailing 4-2 entering the bottom of the sixth inning, Florida State rallied to take a 6-4 lead. Easy enough. But with runners still on second and third and one out, Kalei Harding hit a deep fly ball to center field that turned into an inning-ending double play when Clemson doubled a wandering Sydney Sherrill off second base. Umpires ruled that the runner on third, Brooke Blankenship, tagged and crossed home plate for the seventh run before Sherrill was doubled off second base. Television replays suggested the out at second base instead happened half a beat before Blankenship’s foot touched home plate. But while the play fits the NCAA criteria for review, instant replay wasn’t in effect for Friday’s game. Naturally, because the softball gods are like this, Clemson scored twice in the top of the seventh to make the debated run the decisive run.

See? We didn’t even get to Clemson’s McKenzie Clark hitting three home runs off a Florida State pitching staff that doesn’t allow many. Or FSU clinching the best start in program history.

3. Arkansas offense comes alive late to run-rule Florida. The Arkansas hitters certainly don’t need any help scoring runs, but the Hogs will take it if offered. Errors opened the door for a five-run fifth inning as No. 6 Arkansas beat No. 10 Florida 9-1 in six innings to snap a 30-game losing streak to the Gators dating back to 2007. The meeting between last year’s SEC regular season co-champions turned in Arkansas’ favor late, as the Hogs scored all nine runs in the final two innings. Two Florida errors to start the fifth led to an RBI single by KB Sides. As she’s prone to do, Danielle Gibson delivered the big blow with a three-run double to give Arkansas a 4-0 lead and knock Florida starter Elizabeth Hightower from the game. More walks and errors helped the Hogs reach run-rule territory in the sixth with four more runs. Arkansas drew eight walks overall. Chenise Delce continued her superb run in the circle. The redshirt junior gave up one run on four hits with eight strikeouts and two walks. It didn’t help Florida that graduate senior Hannah Adams is sidelined for at least three weeks after suffering a hand injury in last week’s series against Ole Miss. But even with Adams in the lineup, Arkansas will be tough for Florida to beat. The Hogs are on a mission to show any remaining skeptics their breakthrough SEC title last season wasn’t a fluke.

4. Cottrill had her pitcher’s back. It was not hard to predict a pitching duel breaking out between Oklahoma State’s Kelly Maxwell and Texas’ Hailey Dolcini when they met in the series opener. That’s exactly what happened. OSU catcher Julia Cottrill finally ended things in the 9th inning with a walk-off home run to left center to secure the 3-2 victory and provide her pitcher with the ultimate support. After they both yielded early two-run home runs – Dolcini to OSU’s Katelynn Carwile in the first inning and Maxwell to Texas’ McKenzie Parker in the third – the aces matched zeroes across the board until Cottrill sent everyone home for the night in Stillwater. Maxwell gave up seven hits while striking out 10 and walking two to improve to 15-1. Dolcini surrendered six hits while striking out six and walking two. Dolcini was coming off a milestone win over Oklahoma last weekend that snapped OU’s 40-game winning streak.

6. Bruins seventh-inning barrage. Mariah Mazon and the Beavers felt mighty confident leading into the seventh. Outside of a Delanie Wisz solo shot, Mazon had held UCLA’s lineup down. Plus her offense extended her one-run lead to three in the previous half inning. But better late than never to start scoring some runs. The first three Bruins reached to open up the inning. A fly out and a RBI groundout cut the lead to two but put UCLA down to its last out. Wisz came through once again, doubling in two to tie the game and put a runner in scoring position for Maya Brady. All she needed was a single, Brady did a whole lot more with it. She hit an opposite field two-run jack to put UCLA up 6-4. Megan Faraimo, who struck out 12 batters, re-entered for the seventh and immediately gave up a home run to Des Rivera as the Beavers pulled within one. Wisz once again had the final laugh. Oregon State put another runner on, only to end the game on a strike’em out, throw’em out. UCLA is now one game behind Arizona State in the Pac-12 standings.

7. Ohio State’s Lexie Handley picked a good day to find her groove again. Handley is an Ohio native, so even though this weekend marks the graduate transfer’s first taste of the Ohio State-Michigan softball rivalry, we’ll assume she is well-versed on how much it means in every sport. She did her part to ensure the opening round of a crucial Big Ten series went to the Buckeyes, matching a career-high 13 strikeouts in a 6-2 victory in Ann Arbor. Handley had hit a rough patch in recent weeks, allowing 42 hits in her most recent 26.2 innings. She hardly pitched like someone feeling any pressure Friday. She gave up a 1-0 lead in the fourth inning, but after the Buckeyes quickly reclaimed their lead, she calmly set No. 22 Michigan down in order in two of the final three innings. Six Buckeyes drove in runs, but no one did more than freshman Melina Wilkison. The leadoff hitter scored three runs and hit a double and a home run.

8. Pleasant victory for LSU. Taylor Pleasants has erased all the memories of her slow start at the plate this season. The redshirt sophomore shortstop continued to swing a hot bat in the series opener against Georgia. Pleasants finished 3 for 4 with two doubles, a home run and two runs scored as the Tigers hammered the Dawgs 8-1. That was more than enough run support for Ali Kilponen, who limited the potent UGA offense to just four hits. Pleasants has raised her average to .331 with 13 doubles, 10 home runs and 38 RBIs. McKenzie Redoutey broke the game open for LSU, hitting a three-run double in the fifth inning. The Tigers put the game on ice in the sixth inning with home runs from freshman Sydney Peterson and Pleasants. It was Peterson’s first career home run and first career RBI.

9. A Washington storm of homers. The normal suspects in the Huskies lineup drove in runs on Friday. Sami Reynolds, Baylee Klingler and Madison Huskey drove in eight of Washington’s runs in the 9-0 win over Oregon. Already with a 1-0 lead, Reynolds approached the plate with two on. Stevie Hansen knew she had to pitch to the outfielder with Baylee Klingler on deck and only one out. Well she sure did pitch to her, as Reynolds belted out a three-run home run. Hansen pitched to Klingler too, and she too hit one out for her 19th of the season. Later in the fifth, the Ducks wanted nothing to do with Klingler, intentionally walking her to load the bases for Huskey. She made them pay, driving out a grand slam for only her second home run of Pac-12 play.

10. Addison Barnard is doing it again. Barnard hit a home run in Wichita State’s conference victory against Memphis because it’s what she does. She now has five home runs in the past three games and 23 on the season to lead the nation. The sophomore also has 45 home runs in her first 91 games with the Shockers. For those counting at home, that’s one fewer home run than Jocelyn Alo hit in 121 games over her first two seasons. And Barnard isn’t done yet in 2022.

11. No Jourdyn Campbell, no win for Louisiana. More than just about any team in the country, Louisiana has wiggle room to drop a conference game here or there. But Friday’s 4-1 setback to open a Sun Belt series at Appalachian State was a double whammy. Not only did the Ragin’ Cajuns lose the game in an usually difficult start by Sam Landry, but they suffered defeat without Campbell in the lineup to help. Second on the team in OPS, Campbell left Tuesday’s win at Illinois after a play at third base in the first inning. She didn’t play Wednesday at Indiana and was out of the lineup Friday in Boone, North Carolina. It may not be a coincidence that her teammates had one of their worst offensive showings of the season with four hits. Credit also to Appalachian State pitcher Delani Buckner for throwing a gem. Louisiana needs two in a row to maintain its streak of winning 70 consecutive conference series.

12. Jessi Alcala saves the day – and first place – for Fullerton. After a limited role the past two seasons, Alcala entered the weekend with four home runs and six doubles. She can go big with the bat. But she hasn’t had a bigger hit than the two-out, three-run home she hit in the seventh inning of Friday’s 5-3 victory against UCSB. Tied with Long Beach State for first place in the Big West, Fullerton was in danger of ceding control of the title race with what would have been a shocking defeat (UCSB entered the game 3-12 in the league). That’s a big deal in a conference that doesn’t have a postseason tournament. Instead, it will look on paper like just another mostly routine day at the office for the Titans. (Also, this highlight is significantly more fun with the return of home plate celebrations).

Bonus: Northwestern State freshman Sage Hoover didn’t waste much time gaining a foothold in college softball, throwing a two-hit shutout with 10 strikeouts in her debut in February. Where does a young pitcher go from there? Well, how about a no-hitter? Hoover didn’t allow a hit and struck out eight in her team’s 1-0 victory against Incarnate Word in a Friday doubleheader. It might not even be her best performance of the month. On April 8, Hoover threw 222 pitches and struck out 18 batters in a 12-inning marathon victory against Texas A&M Corpus-Christi.