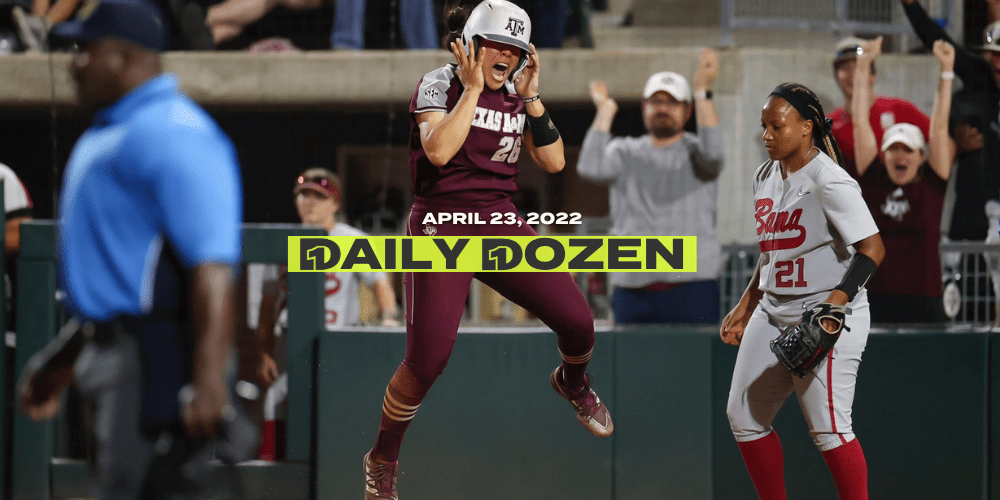 1. No. 6 Arkansas and Texas A&M make history. The Razorbacks earned their first road series win against No. 10 Florida in program history and first series win of any kind against Florida since 2000. Rhi’s Rewind takes you inside another KB Sides masterpiece.

Meanwhile, if you didn’t catch the second game of the SEC series between Texas A&M and No. 2 Alabama, you might be shocked to see the final score. Behind a seven-run second inning, Texas A&M rolled to a 9-1 run-rule victory and its first-ever series victory against the Tide. After putting together four runs with walks and single in the pivotal second inning, Texas A&M’s Morgan Smith added the exclamation with a three-run home run. Pitcher Makinzy Herzog held the Tide in check, allowing only one hit in 4.1 innings. She also drove in the final run that ended the game in the fifth inning.

2. Badgers break No. 21 Nebraska’s 18-game winning streak and win the series. In the span of a doubleheader, Maddie Schwartz and Wisconsin ended the Cornhuskers’ streak and notched their fourth consecutive series win over Nebraska. Schwartz threw 191 pitches in 14 innings to defeat the Huskers not once, but twice on Saturday. The senior right-hander has 20 wins this season, joining Andrea Kirtchberg, Cassandra Darrah, Kaitlyn Menz and Eden Brock as the only Badgers with at least 20 wins in a season. Tara’s Take tells you more.

3. A grand time for first hits of conference season. Washington’s Brooke Nelson and Oregon’s Tehya Bird must have consumed the same pregame meal. Both entered Saturday’s contest without a hit during Pac-12 play. But both made their mark early in Eugene. Bird hit a grand slam in her first at-bat of the game to put Oregon ahead by four. Nelson answered with her own grand slam, and after two innings, the Huskies led 7-6. The fireworks stalled thereafter, as Washington’s Pat Moore and Oregon’s Stevie Hansen stabilized things in the circle. Oregon’s Allee Bunker drove in Paige Sinicki in the fourth to tie the game at seven. It has been a struggle at the plate this season for Washington’s SilentRain Espinoza, but she picked the right time for her first hit of Pac-12 play and second of the season. She lifted a two-run bomb out in the eighth to close the scoring in No. 12 Washington’s victory.

4. Georgia bats ignite early. On a day the 15th-ranked Dawgs honored recently-retired coach Lu Harris-Champer, they allowed fans to savor the occasion for as long as possible thanks to an explosion of runs in the first inning against LSU. Harris-Champer’s ceremonial first pitch at Jack Turner Stadium was about the only pitch that didn’t get hit at the outset. After the Tigers scored three runs on a Georgia Clark home run to start the game, Georgia answered with 12 runs in the bottom of the inning. It started innocently enough with RBI singles from Jayda Kearney, Jaiden Fields and Aniyah Black to tie the game. Mackenzie Puckett drove a two-run single to right field to give UGA the lead. It was elevated to another level with a three-run home run by Sydney Kuma, followed by two-run home runs from Lacey Fincher and Fields. All three home runs were hit with two outs. The final tally from the first inning for UGA: 12 runs on 10 hits in 13 at-bats against four different LSU pitchers.

LSU mounted a slight comeback, but the Dawgs held on for a 16-9 win to even the series. The outburst came less than 24 hours after UGA was held to just one run and four hits in the opener. Junior Sara Mosley matched the UGA school record by going 5 for 5, with all five being singles. Mosley scored twice and drove in two. The game lasted 3 hours and 12 minutes.

5. Kim Wert run-rules Kentucky. Basically. Wert “only” got credit for seven RBIs as Missouri routed No. 13 Kentucky 14-0 in its SEC series opener in Lexington. But the first three times Wert put the ball in play, Missouri scored its first nine runs. The Wert onslaught started with a three-run home run in the first inning that bounced off the upper half of the foul pole in left. An inning later, she added a grand slam. She hadn’t hit any home runs since becoming Missouri’s all-time leader on April 1. And while she didn’t get credit for the RBIs when two runs scored on a throwing error in the fourth inning, her single led to the error. And just like that, with a Jordan Weber five-inning shutout, Missouri won a series opener for just the second time this season. It is Kentucky’s worst shellacking since a 14-0 setback against Alabama in 2013.

6. Syracuse worsens Duke’s week. Duke lost twice against unranked teams in the entirety of the 2021 season. Entering this week, it had one loss against an unranked team this season. Well, the Blue Devils now have two more from the past four days. Saturday, Syracuse beat No. 9 Duke 1-0 to even their ACC series. Added to Duke’s midweek loss at Liberty, Marissa Young’s team is moving in the wrong direction when it comes to the race for a top-eight seed in the NCAA tournament. Some national seed and regional hosting rights should still be safe. For now. But the Orange were the story Saturday, namely the pitching triumvirate of starter Ariana Adams and relievers Lindsey Hendrix and Kaia Oliver. With coach Shannon Doepking (who never had to worry much about pitching changes when catching Monica Abbott at Tennessee) pulling the strings, each Syracuse pitcher worked 2.1 innings. Syracuse had been outscored 32-3 by ranked ACC teams this season, including Duke’s 5-0 win a day earlier.

7. No. 22 Michigan picks itself off the deck. Michigan hasn’t finished even .500 in the Big Ten since 1990. That’s the year after “The Simpsons” aired its first episode. But after surrendering a 2-1 lead in the top of the seventh inning of Saturday’s game against Ohio State, a day after losing the opener against their rival, the Wolverines were starting at a losing conference record with just seven games left to play. Enter Taylor Bump. On Senior Day, the fifth-year player delivered a walk-off, two-run triple – the second triple of her 158 games with the team from Ann Arbor. With the victory, and Lexie Blair delivering a 2-for-4 day and her first RBI since returning from injury (albeit at first base instead of center field), perhaps Michigan found the pivot point for its season Saturday.

8. Double perfection in Tennessee. Having one perfect game in the state wasn’t enough on Saturday. Two pitchers reached the milestone. No. 16 Tennessee’s Ashley Rogers and Belmont’s Emma Summers both achieved perfection. Rogers’ perfect game came in a five-inning 8-0 win over East Carolina while Summers went the full 7.0 innings in a 6-0 win over Morehead State. Summers struck out 16 batters and Rogers struck out 12. It’s been a frustrating final college season for Rogers. The Tennessee senior ace has dealt with health issues and been in and out of the circle throughout the last month. But she was back in dominant form in throwing the first perfect game of her career and the 13th perfect game in UT program history. The 5.0 innings thrown were the most for Rogers since Feb. 26th, when she went 5.2 against UCLA in the Mary Nutter Collegiate Classic. Rogers wasn’t facing an SEC lineup, but in a season filled with personal adversity, the milestone provides a needed boost and promise for the stretch run.

9. Last week’s Easter eggs are this week’s no-hitters. Seriously, they were everywhere.

10. Another day and another team leaves it late to retain a share of first place. Friday, Cal State Fullerton did the honors. Saturday, it was Western Kentucky going to the wire against Marshall in a battle for first place in Conference USA’s East Division. The Hilltoppers trailed the entire game, right up until Maddie Bowlds walked to the plate with a runner on second base and one out in the bottom of the seventh. The fifth-year senior delivered just the fifth home run of her career for a 10-9 victory, keeping Western Kentucky and Marshall level atop the East. And that’s no small prize. The top two seeds in the conference tournament receive a double-bye and skip the dangerous single-elimination opening day.

11. Miami comeback clinches series over Pac-12 guest. The Redhawks already took the series opener from Cal on Friday. Squarely on the bubble for the NCAA tournament, the Golden Bears started quickly with a 5-1 lead to open the game. Sona Halajian appeared to have found her groove in the circle. She allowed a solo home run to Adriana Barlow to start the third inning, but went on to retire 13 of the next 14 batters to enter the seventh. And then the homers started raining. Murphy and Riley Coyne went back to back to cut the deficit to 5-3. Barlow smashed her second of the day to tie the game. Miami’s best hitter Karli Spaid added the cherry on top. She launched a two-run, walk-off blast to secure a 7-5 victory and clinch the series ahead of Sunday’s finale.

12. The best win streak shipping up to Boston. With Arizona State and Nebraska losing on back-to-back days, the nation’s best win streak belongs to Boston University. With an extra-inning win over Boston College earlier in the week and a doubleheader sweep on Saturday over Colgate, Ashley Waters’ team has won 22 straight. Reigning Patriot League Player of the Year Caitlin Coker went a combined 6-for-9 with seven RBIs on Saturday. The Terriers have one more game against Colgate on Sunday and two more series against Army and Lehigh after this weekend. Boston has the chance to enter the Patriot League tournament on a 29-game winning streak.

Janelle Meoño returns from injury. The reigning Pac-12 batting champ made her first appearance since March 3. In the first game of a doubleheader at Utah, Meoño came in as a pinch hitter and produced an RBI single in a 5-3 loss to the Utes. As the leadoff hitter in the second game, she went 2-for-3 in Arizona’s 8-0 victory.