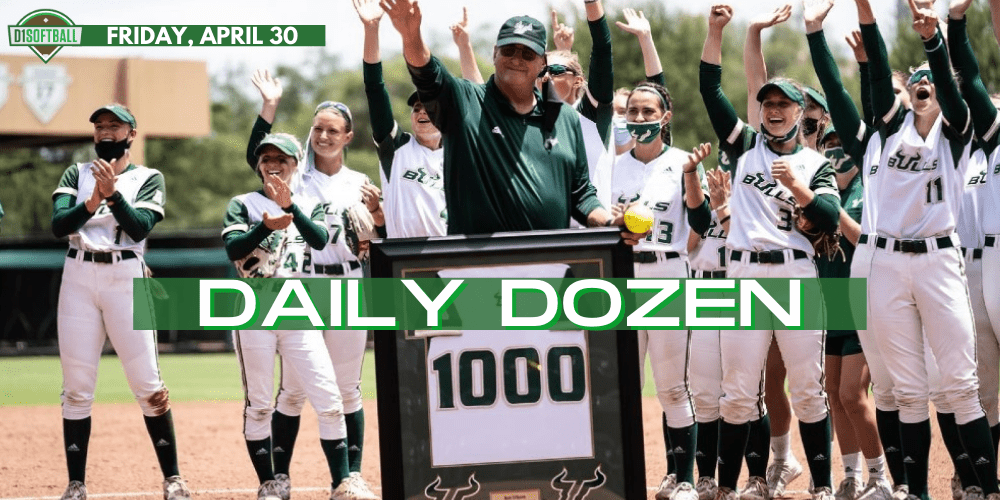 1. If you are going to celebrate getting 1,000 wins, you might as well throw a no-hitter to make it even more memorable. University of South Florida head coach Ken Eriksen recorded career victory No. 1,000 on Friday afternoon and Georgina Corrick decided to amplify the celebration by throwing a no-hitter in USF’s 5-0 victory over East Carolina. The no-hitter was Corrick’s second of the season and fourth of her career. The junior had nine strikeouts, one walk and one hit by pitch with Josie Foreman catching. Eriksen, who is also the US Olympic coach, is the 28th NCAA Division I head coach to reach 1,000 career wins, and the second to do so entirely at a Florida school (JoAnne Graf, Florida State). In his 24 seasons at the helm, Eriksen’s USF teams have won 40+ games 16 times, 50+ games six times and had one 60-win season.

2. Keely Rochard didn’t want to let Corrick get too far ahead in the race for pitcher of the week. Virginia Tech’s ace threw a no-hitter in her team’s 8-0 win at Syracuse, a hot finish to an April that otherwise concluded in what appeared to be frigid conditions near the Finger Lakes. She didn’t give her fielders many chances to stay warm, striking out 16 (including all three batters looking in the seventh) and allowing just a lone walk. Almost amazingly, given how well she’s pitched this season, it was just her second no-hitter and first of the seven-inning variety. She has seven no-hitters in her career.

3. Oklahoma State will enter next week’s Bedlam series against Oklahoma with a chance to win the Big 12 outright. Granted, that would still require sweeping the Sooners at this point, but it’s still just Friday. Oklahoma State improved to 12-1 in the conference with a 3-1 win against Texas in this weekend’s series opener. Carrie Eberle met the definition of “scattering” eight hits — other than Mary Iakopo’s home run, the Longhorns managed only singles.

4. Kaitlyn Lim propelled Stanford to a 1-0 win over Oregon State with a two-out walk-off single in the ninth. As the only player to come off the bench and one of two to get a hit with runners on base, Lim crushed the first pitch to right field to score Taylor Gindlesperger. Starting pitchers Alana Vawter (17-5) and Mariah Mazon (11-12) duked it out in the circle, each going the distance and allowing seven hits a piece. Once again, freshman phenom Vawter dealt in the circle throwing a complete-game 9.0 inning shutout for the Cardinal.

5. Alabama’s Bailey Hemphill draws a lot of walks and hits a lot of home runs. The former comes at the expense of the latter, so it helps if Hemphill’s teammates can make pitchers pay. The Tide did just that in the series opener against Georgia. Mary Wilson Avant intentionally walked Hemphill to put two runners on base in the third inning, and Kaylee Tow took offense – literally. Tow belted a three-run home run as Alabama scored all four of its runs in the frame to beat the Dawgs 4-1 on the road. Montana Fouts threw a three-hitter with nine strikeouts and one walk for the Tide.

6. A win and a save against Michigan. Another win against Minnesota. And now a win against Northwestern. Sydney Sickels is doing her part to make sure the Big Ten is a four-team race. The Illinois junior ace recorded her first career win against Northwestern in impressive fashion. She struck out 10 in a complete game win that pulls the Illini within a game of the Wildcats for third place in the Big Ten. And with a 4-3 record against the three teams ahead of them, the Illini continue building a postseason resume.

7. You really don’t want to see South Dakota State’s Tori Kniesche in a regional. The freshman threw another no-hitter Friday in her team’s 11-0 win against Creighton in five innings. That’s her second no-hitter in the past seven days. Over that span, which also included another win, she’s pitched a total of 15 innings, allowed three hits and struck out 31 batters. Kniesche is now 18-1 on the season.

8. Speaking of pitchers you don’t want to face in the postseason, North Texas’ Hope Trautwein struck out 17 of the 23 batters she faced in a shutout against UTSA. Normally that would be make bigger headlines. But once you’ve recorded 21 strikeouts twice this season already, including a perfect game, it becomes somewhat routine. Which is crazy. But Trautwein has set a high standard. The senior ace was at it again, throwing a 1-hitter with 17 strikeouts in a 7-0 win over UTSA. Trautwein now has a single-season career high 184 strikeouts.

9. Tennessee is getting healthy just in time for the stretch run. Lady Vols junior Ashley Rogers bounced back from her worst outing of the season to outduel Auburn freshman Shelby Lowe in a 2-1 series-opening victory for Tennessee. But seeing Rylie West (mono) and Amanda Ayala (ankle) back in the lineup was another big win for Tennessee. Two of the best hitters on the roster, West and Ayala have missed multiple weeks. West immediately delivered for the Lady Vols by driving in the game-winning run with an RBI double in the fourth inning after Chelsea Seggern started the scoring with a solo home run. Ayala struck out looking in her only at-bat as a pinch hitter. Rogers (21-6) was back in fine form, throwing a two-hitter with four strikeouts to beat Lowe (13-6), who gave up six hits while striking out five.

10. Florida and Oregon produced two of Friday’s best wins against Missouri and Arizona State, respectively. But while the Gators and Ducks scored high on resiliency and resolve, did they leave some questions unanswered? The Gators scored their five runs on four hits — getting all five runs in one big inning. Now, it doesn’t matter when you score the runs as long as you score them. And Florida always get people on base via walks. But the Gators do seem to live close to the edge offensively at times. Meanwhile, Oregon’s extra-inning road win at Arizona State was much needed. Allee Bunker powered the Ducks with three hits and four RBIs. But Brooke Yanez ran into trouble in the middle innings to continue an up-and-down stretch for the ace.

11. Hang on, Storms and Pease. Kentucky’s Autumn Humes wants back in the seasonal race. The best Autumn in college softball? Well, Friday it had to be Kentucky’s two-way threat. Humes went the distance in the circle in Kentucky’s 5-1 win at Texas A&M and struck out a season-high 11 batters. It’s a nice end to what had been a bit of a rough April for her ERA. But she wasn’t done there. Humes also drove in as many runs than she allowed, hitting her fifth home run of the season as part of a 2-for-4 day at the plate. Friday started out as a good day for Kentucky, which was named one of 20 potential regional hosts and appeared to be in position for a top 16 seed. Humes made sure the day finished just as well.

12. We already know this spring isn’t the end of the road for Rachel Garcia, Dejah Mulipola and Bubba Nickles, who will head to Tokyo with Team USA. It turns out they aren’t alone. A dozen players who have exhausted their eligibility will be part of the first Athletes Unlimited “draft” on May 10. AU is the four-team league that drew overwhelmingly rave reviews for professionalism from participants in its 2020 debut. The league’s teams are redrafted each week during the season, so this won’t look like a familiar college draft. But streamed live on Facebook on May 10, figures like Jessica Mendoza, Amanda Scarborough, Natasha Watley and even Miami Marlins general manager Kim Ng will announce the 12 college players invited to participate in the 60-player league in 2021.

BONUS: Clemson is off this weekend, and the Tigers made some time to educate the masses about softball with some great social media content.