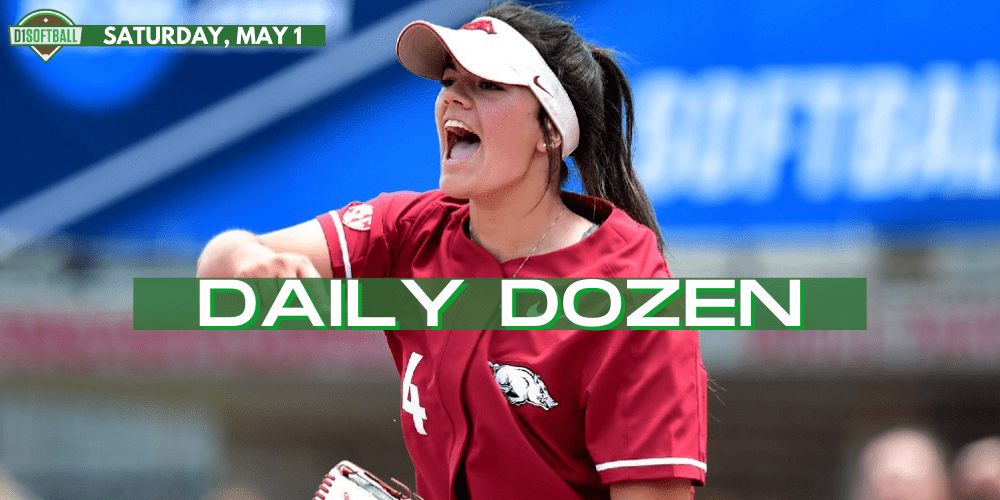 1. Is Georgina Corrick going to no-hit the weekend? The USF ace threw her fifth career no-hitter Saturday — barely 24 hours after throwing her fourth no-hitter. In other words, East Carolina is having a bit of a rough weekend. Then again, a lot of teams have rough weekends against Corrick. Just ask Wichita State. Saturday, USF waited until the bottom of the sixth to scrape together the only run Corrick needed in a 1-0 win against the Pirates, but that wasn’t the end of the drama. A walk and an error gave East Carolina two runners with just one out in the top of the seventh, but Corrick retired the next two batters to finish off her second gem. She wasn’t done. Corrick pitched 2 and 2/3 innings of no-hit relief to pick up a save in the nigthcap.

2. Mary Haff’s bag got lost in transit while Arkansas was traveling to Baton Rouge to play LSU. According to the ESPNU broadcast crew of Amanda Scarborough and Eric Frede, Haff had to borrow a manager’s glove and buy new cleats. It didn’t rattle her one bit. The redshirt junior threw a four-hit shutout, striking out the side to end the game as No. 8 Arkansas beat No. 11 LSU 1-0 to open the series at Tiger Park, which is allowing full capacity attendance without mask restrictions once again. The victory snapped a 17-game losing streak for the Razorbacks in Baton Rouge, and was their first win there since 2005. Haff and LSU’s Shelbi Sunseri were locked in a scoreless draw until senior pinch hitter Ryan Jackson delivered an RBI single in the seventh to score pinch runner Cally Kildow and give the Hogs the edge. Haff made it stand, and helped Arkansas move one step closer to clinching the program’s first SEC title. The Hogs need just one win in the final two games to clinch at least a share of the crown after Florida suffered a run-rule loss to Missouri.

3. Maybe Alissa Humphrey and Odicci Alexander aren’t Megan Good and Jailyn Ford quite yet, but a great many programs wish they had James Madison’s current pair of aces. Humphrey didn’t waste any time getting her no-hitter for May out of the way. The freshman transfer no-hit College of Charleston in the opening game of Saturday’s doubleheader — she also threw no-hitters in March and April. But Alexander then did that one better. Or maybe two better. Not only did Alexander throw a perfect game in the nightcap, striking out 14 of the 15 batters she faced, she hit a three-run home run and drove in another run with a bases loaded walk in a 9-0 win.

4. Perhaps Kelly Maxwell just wanted to remind everyone that Oklahoma State is still very much part of any conversation about teams with two aces. After a quiet April, Maxwell opened May by helping the Cowgirls clinch their series at Texas. She went the distance in Saturday’s 5-1 win, allowing just two hits and striking out nine. Even when she wasn’t perfect, allowing a solo home run in third inning or putting runners on via walk in the final three innings, she never pitched flustered. It was her first outing longer than two innings since April 17.

5. Talk about an emphatic response. After dropping the series opener against No. 3 Florida while scoring only two runs, Missouri came back much more aggressive at the plate. The Tigers evened the series on a walk-off home run by Hatti Moore. Only it wasn’t a walk-off in the bottom of the seventh. Moore’s home run came in the fifth inning and capped a 10-2 run-rule win over the Gators. The victory not only hurt Florida’s pride – it was the most runs surrendered by the Gators this season – it hindered their SEC title chances. The Gators are trailing Arkansas in the SEC standings, with Alabama gaining ground after another victory over Georgia.

6. Evanston was the place to be Saturday. The series already drenched in postseason implications for two teams that can’t feel comfortable about their NCAA tournament profiles, Saturday’s doubleheader offered matching seventh-inning takeovers. Northwestern’s Morgan Newport hit a walk-off home run to win the opening game, but Illinois’ Kailee Powell gave her team a seventh-inning lead in the nightcap. The latter win also gave Illinois the edge in the series entering Sunday’s finale.

7. UNLV moved into sole possession of first place in the Mountain West Conference standings with a doubleheader sweep over now second-place Fresno State. UNLV is trying to win its first MWC title and make its first NCAA appearance since 2009. Fresno State was riding a 13-game winning streak entering the weekend and hadn’t given up a run in six straight shutouts. But the Rebels tagged the Bulldogs for 15 runs, including five home runs in Game 1 against Fresno State ace Haley Dolcini. Both UNLV wins came in walk-off fashion, with Mia Trejo driving an RBI single off the wall in the bottom of the seventh in a 6-5 victory in Game 1, and a resounding 9-1 win in five innings in the nightcap.

8. Speaking of the West, Cal State Fullerton is dominating in the Big West. The Titans have won 25 straight conference games and 20 straight conference series. They recorded their eighth straight conference sweep with a series win over Cal Poly this weekend. In Saturday’s doubleheader domination, CSUF outscored Cal Poly 25-2. Kelsie Whitmore was 5 for 6 with three home runs, two doubles and nine RBIs in the victories.

9. Stanford and Oregon State are technically playing a four-game series, but it’s more like five considering the extra time they’ve spent on the field. One day after Stanford beat the Beavers 1-0 on a ninth-inning walk-off, the Cardinal outlasted OSU again. Stanford’s Taylor Gindlesperger hit the walk-off single in the bottom of the 13th for a 4-3 victory to open Saturday’s doubleheader. It was the longest game played by Stanford since 2011, and clinched Stanford’s first series victory over Oregon State since 2013. In the second game of the doubleheader, which does not count towards the Pac-12 standings, Oregon State emerged with a 6-3 win in just seven innings.

10. Autumn Humes didn’t need as many innings to make as big of an impact against Texas A&M in the second game of the series. The Kentucky graduate senior came through with clutch relief and then drove in the winning run in the eighth inning for Kentucky in a 2-1 win that gave the Wildcats their first series win since March. It came less than 24 hours after Humes recorded a career-high 11 strikeouts in the series opener. The teams were scoreless through six innings before the Wildcats took a 1-0 lead in the seventh with help from an error by A&M’s Haley Lee at first base. But Lee got redemption in the bottom half, belting her 22nd home run of the season to tie the game 1-1. Kentucky went to the bullpen and summoned Humes, who struck out two batters to end the threat. Humes then roped an RBI double in the eighth inning to score Erin Coffel, and secured her second win of the series in the bottom half.

11. Michigan coach Carol Hutchins has never been one to put individual accolades ahead of team accomplishments, but it was still a little surprising to see her lift starting pitcher Alex Storako after five innings of no-hit softball Saturday against Penn State. Michigan led 10-0 at the time, and senior Sarah Schaefer closed out the win by getting three outs (she also pitched the final inning in Friday’s win). It would have been the first solo no-hitter of the season for Storako, who leads the nation in ERA. Prior to Saturday, she had completed 10 of 13 starts this season.

12. Monmouth clinched its third consecutive MAAC regular season championship by sweeping a doubleheader against second place Fairfield. That doesn’t guarantee the New Jersey school will make a third consecutive NCAA tournament appearance — it still needs to win the MAAC tournament. But it does guarantee that event will take place at Monmouth.