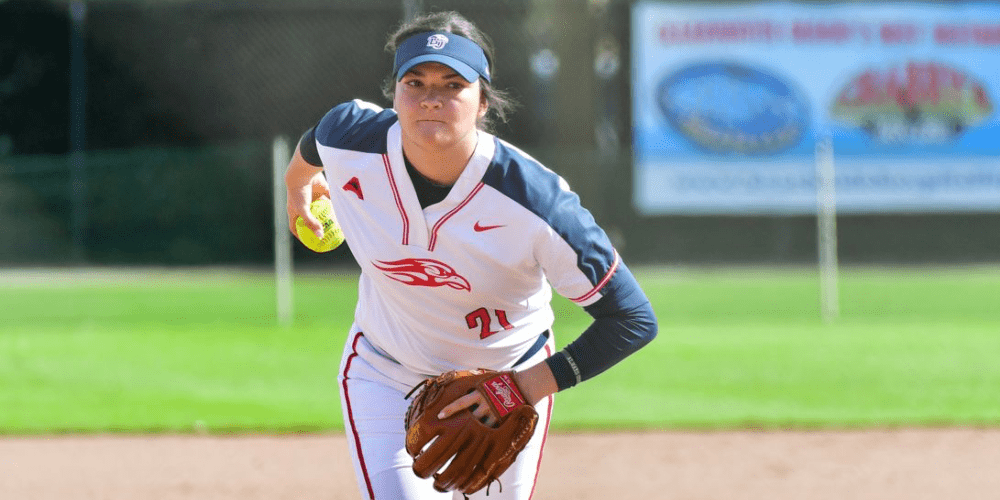 Perfection, streak-busting milestones and intriguing SEC openers are just a few of the highlights from Friday. Rhiannon Potkey and Tara Henry get you caught up in the Daily Dozen:

1. Liberty’s Megan Johnson threw the fifth perfect game in program history in a 13-0 five-inning win over Texas Southern at the Longhorn Invitational. Johnson threw just 39 pitches to retire all 15 batters and had three strikeouts. Madison Via made a running catch in right field for the final out.  Johnson extended her scoreless inning streak to 13.2. The Flames gave No. 2 Texas all it could handle in the second game, falling to the Longhorns 2-0.

2. There are few better ways to record a career milestone than with a historical win. Coastal Carolina head coach Kelley Green celebrated both as the Chanticleers defeated the first top 10 opponent in program history with a 7-1 upset over No. 6 Louisiana in the Sun Belt Conference opener. The win was the 700th of Green’s career as a head coach and snapped Louisiana’s 30-game win streak in Sun Belt play dating back to April 2018.

3. Cal State Fullerton recorded its first shutout of a ranked opponent since 2017 by defeating No. 19 Minnesota 2-0 at the UCLA/LBSU Invitational. Senior right-hander Sophie Frost went the distance, allowing just two hits while striking out nine.  In their second game of the day, the Titans lost to San Diego State in 11 innings on walk-off RBI single by Alexa Schultz. San Diego State has handed CSUF both of its extra-inning losses this season.

Sophie had herself A DAY 🥶

4. SEC play opened with eight teams in action in series openers. Two home teams won (Florida and Missouri) and two road teams won (South Carolina and Arkansas). The Arkansas win was the first in Tuscaloosa for the Razorbacks since March 17, 2000 and only second overall (30-2). Senior pitcher Autumn Storms held the Tide to five hits in the complete-game shutout.

5. In the tournament opener on Thursday night, the Sun Devils hit four home runs in a 12-0 run-rule win over Wright State. Arizona State entered the day with an NCAA-leading 40 home runs and faced new Mexico State, which was in second with 38 home runs.  Neither squad went yard. Instead,  No. 15 Arizona State (17-7) suffered its first shut out loss of the season. The Aggies defeated the Sun Devils, 2-0 handing ASU its first shutout loss since last April.

6. The ACC continued conference play with matchups between eight different schools. Clemson extended its winning streak to 9, moving to 4-0 in conference and 17-7 on the season.

7. Washington blasted a season-high five home runs against Santa Clara to defeat the Broncos (19-0). Sami Reynolds and SilentRain Espinosa each hit two while Kelley Lynch went yard for her 8th home run of the year. Reynolds was 5-for-5 on the day with three singles, picking up her first and second home run of the year.  Taryn Atlee went 3-for-3 and fell just short of hitting the cycle by a home run. Plain went 5.0 innings for the Huskies picking up her tenth win of the season.

8. Arizona’s Jessie Harper hit her 74th career home run and team-leading eighth of the season for the senior against South Dakota. It brought in RBI Nos. 200 and 201 in her career; she is second in career RBI among active players in the NCAA. Mariah Lopez was virtually perfect in the circle giving up just one hit, a solo home run to Lauren Wobken in the fifth inning. Lopez improved to 11-2 on the year, tied for the NCAA lead with 11 wins.

9. Western Illinois junior Abby Carlin finished with a career-high 14 strikeouts in a 6-2 win over DePaul. Carlin’s strikeout total tied for fifth in program history for a single game. The pitcher she tied? That would be her head coach Holly Van Vlymen, who tallied 14 strikeouts on four different occasions between 1999-2000.

Abby Carlin was wheeling and dealing … 1⃣4⃣ Ks in a Leatherneck win.

10. Oklahoma staged a comeback from an early three-run deficit to beat Mercer 10-5. Senior Nicole Mendes, who returned to action last week for the first time since tearing her ACL, hit the go-ahead home run for OU in a five-run sixth inning that broke the game open. In the nightcap against No. 20 Utah, Mendes made her first start of the season and belted another home run as the Sooners led from start to finish in a 10-2 win in five innings.

12. JMU senior Kate Gordon put her name in the record books in a 10-5 home-opening loss to UConn. Gordon hit two home runs to break the JMU and Colonial Athletic Association career home run record with 45.  Gordon hit a solo shot in the first inning and a two-run shot in the second.