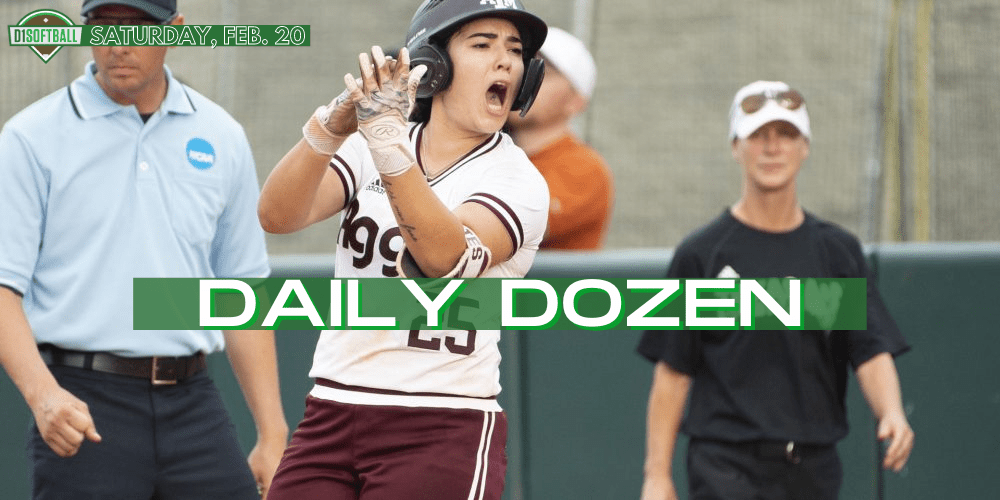 1. As sure as the sun sets in the west, No. 1 UCLA needed just one swing to mount an epic comeback. Down by a run in the bottom of the seventh to Cal State Fullerton, the Bruins clawed back scoring seven runs in the final frame for a 10-4 win. Redshirt freshman Taylor Edwards was the hero in game two of the doubleheader, knocking a double down the left field line to score two and put UCLA back on top.

Olympian Rachel Garcia started game one of the DH but left the game in the top of the first due to injury while running the bases. Good news, she was smiling in the stands just an hour later.

2. Even at limited capacity and fans socially distanced, the energy was palpable at Rhoads Stadium for the first of two meetings this weekend between No. 5 Alabama and No. 7 LSU at the Easton Bama Bash. The Crimson Tide gave the faithful plenty to cheer about in a 5-2 victory. Kaylee Tow was 3 for 4 with a run scored and Lexi Kilfoyl threw a complete-game six-hitter for Alabama. In what has become a recurring theme in the early season, LSU displayed some shaky defense. The Tigers had four errors against Alabama, moving their season total to 11 in six games. The teams meet again on Sunday at 2 p.m. ET. (SECN+). Although the games don’t count in the SEC standings, they provide a lot of value for both teams.

3. Now that’s how you start a season. Texas A&M’s Haley Lee belted three home runs in her first three at-bats, launching the Aggies to a 9-0 five-inning season-opening win over Central Arkansas at the Texas A&M Invitational. The motorcycle-riding junior catcher finished 3 for 3 with 5 RBIs. Lee entered the game with just seven total career home runs. In game two she went 2-4, with another homer and 3 RBI.

4. Kathy Riley built Longwood into mid-major softball juggernaut in Farmville, Va. Riley stepped aside after last season, but the Lancers are still contending with the bigger programs. Longwood upset No. 18 Georgia 3-2 to deliver Dr. Megan Brown her first victory as a head coach. Arleigh Wood, Angelina Sherba, Leigha Hill and Sydney Backstrom combined on a three-hitter. Leah Powell plated the game-winning run with a safety squeeze to score Sydney Jacobsen. Longwood avenged a loss from a day earlier, when Georgia no-hit the Lancers in a 10-2 win.

5. Two other ranked SEC teams went down very early in the day. No. 15 Missouri lost to Iowa State 9-8 in FAU’s Strike-Out Cancer Tournament, and No. 24 South Carolina lost to SEC foe Auburn 5-4 in its season opener at the Dolphin Invitational. Both teams rebounded to win their next games. Missouri beat Ole Miss 6-2 in another all-SEC matchup and South Carolina beat Jacksonville 10-0. South Carolina and Auburn will meet again on Sunday.

6. Welcome back, Alissa Dalton. Our first look of the season at No. 8 Louisiana went about as expected. Among those stars returning for a bonus farewell season, Dalton singled on the third pitch she saw against Jacksonville State and came around to score. She finished the 8-2 win with three hits, three RBIs, two runs and two stolen bases.

7. The ACC doubleheader between No. 12 Florida State and No. 13 Virginia Tech had two very contrasting outcomes. FSU won the first game 7-1 while Virginia Tech rebounded to win the second game 9-1 in 5 innings. The Hokies hit a 3-run home run (Grace Chavez) and a 2-run home run (Kelsey Bennett) in the 8-run third inning to take control and beat FSU for the first time since 2014. Keely Rochard got the win, striking out seven batters in five innings, allowing just three hits and one earned run.

8. Central Arkansas beat Texas Tech 6-1 in the opening game at the Texas A&M Invitational. UCA has played all Power 5 teams in their first five games. In the win over Texas Tech, Tylar Vernon was 4 for 4 with two runs scored and Kayla Beaver struck out six in 7 innings pitched.

9. N.C. State is not shy about swinging for the fences. It’s in the program’s DNA. The Wolfpack used a little Sam-power to beat Boston College. Sam Gress and Sam Russ hit back-to-back home runs in the bottom of the seventh inning as N.C. State rallied to beat Boston College 7-6. Gress hit a 2-run shot to tie the game and Russ homered in the next at-bat to deliver the Wolfpack the win.

10. No. 6 Florida made its hits count Saturday. The Gators totaled just seven hits against Georgia Southern and Charlotte, but they avoided the SEC upset bug all the same. Down 1-0 entering the seventh inning against Georgia Southern, Florida loaded the bases on walks from Avery Goelz, Hannah Adams and Kendyl Lindaman. Charla Echols then delivered a two-run walk-off single for a 2-1 win. The Gators didn’t let the drama build to the same degree in the nightcap against Charlotte, turning first-inning home runs from Lindaman and freshman Emily Wilkie into a quick 5-0 lead. They only added one more hit in the final six innings, but that was enough to give Tim Walton his 800th win at Florida.

11. One thing about the crowded rosters common across the country this season is that you need to make an impression when you have a chance. No. 4 Arizona’s Hanah Bowen made an impression. Following on the heels of starts from Alyssa Denham and Mariah Lopez in Arizona’s first two games in the Hillenbrand Invitational, Bowen no-hit New Mexico. She faced the minimum in her team’s 12-0 win, missing out on a perfect game only after hitting a batter in the second inning. It is Bowen’s first career no-hitter. It is also Arizona’s 94th no-hitter, which is simply staggering.

12. Three home runs. Two innings. One player. You set the bar high when you go by “BigBopper” on Twitter, but Wichita State’s Lauren Mills earned it and more in Saturday’s win against Lamar. Mills hit two home runs in the second inning, then another in the third inning. Enough people have hit two home runs in an inning that the NCAA doesn’t list all of the joint single-game record holders by name. But it’s difficult to imagine many of them, if any, followed that feat by hitting another home in the next inning.