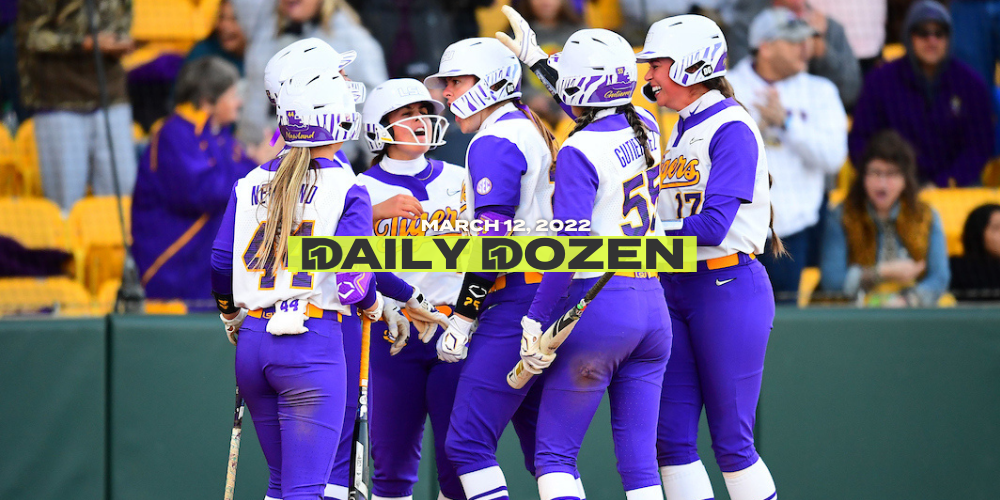 1. Montana Fouts struggles, LSU sweeps two and No. 2 Alabama is no longer undefeated. Alabama can normally count on Fouts to keep runs at a minimum. But the All-American uncharacteristically struggled in the SEC opener as the Tide (20-2) fell from the ranks of the unbeaten following two losses to No. 21 LSU in Baton Rouge. Oklahoma is now the only undefeated Division I program remaining in the country. Fouts entered the first game of the doubleheader having given up only six earned runs and 11 walks in 54.2 innings. By the third inning of the 13-6 loss, she had already allowed five earned runs and walked six. Fouts walked in two runs, had a run score on a wild pitch and a run score on a passed ball. She was pulled in the third with LSU holding a 5-3 lead. The anticipated pitching showdown between Fouts and LSU’s Shelbi Sunseri fizzled early on both sides. Sunseri had to leave the game in the first inning after fouling a ball off her face while at the plate. Sunseri gave a thumbs up to the crowd as she walked off the field for treatment. LSU put the game away with a six-run fifth inning, highlighted by a cathartic 3-run home run from Taylor Pleasants. The Tigers finished with 15 hits, including six extra-base hits. Alabama had only given up 22 total runs in the previous 20 games. The victory demonstrated the potential of the LSU offense, which has been waiting for a breakout amid an inconsistent start to the season.

The Tigers (19-6) carried the momentum into the second game of the doubleheader, beating the Tide 5-1 behind freshman Raelin Chaffin and Georgia Clark to clinch the series win. Chaffin threw a one-hitter with five strikeouts and Clark drove in all five runs on two homers. Alabama welcomed back junior Lexi Kilfoyl, who had been sidelined by a foot injury and hadn’t pitched since Feb. 26. Kilfoyl intentionally walked Pleasants to load the bases in the third inning and Clark made the Tide pay by crushing a grand slam to give LSU a 4-1 lead. Clark went deep again in the sixth inning to put the finishing touches on the statement-making sweep. The teams finish the series on Sunday at 3 p.m. ET.

2. Klingler and the Huskies take advantage of the altitude. Baylee Klingler already had good power numbers leading into the Colorado State Invive, but why not take advantage of the thin air in Colorado. The Washington third baseman hit three home runs against Northern Colorado, tying the school record for the most in one game. She finished 4-for-4 with a double and six RBIs. The Washington freshmen class. Rylee Holtorf hit her first career home run in the 6-3 win over Colorado State. Kinsey Fiedler and Angie Yellen both homered against Northern Colorado. Madison Huskey and Sami Reyolds also joined in on the fun hitting home runs in Saturday’s doubleheader.

3. Dawn Bodrug gives Georgina Corrick a run for her money. Stony Brook’s Bodrug held USF scoreless for seven innings on its home field Saturday, allowing just two hits and striking out 14 batters. That’s good. Unfortunately, not good enough to beat Corrick these days. USF and its ace fought off an upset bid for a 1-0 victory in eight innings. Stony Brook nearly beat USF at its own small-ball game. Stony Brook’s Shauna White stole third after starting the top of the eighth inning on second base via tiebreaker rules. But The Seawolves couldn’t bring her home with three tries against Corrick. The Bulls took advantage in the bottom of the inning, moving their tiebreaker runner to third on a bunt and winning the game when Alexis Johns’ single brought her home. Corrick improves to 16-0, but she has been so ridiculously good this season that eight shutout innings didn’t lower her 0.07 ERA. She’s at 76.1 consecutive scoreless innings.

4. Sooners search for new history to make. Will the No. 1 team in the country ever throw a no-hitter that generates less fanfare than this? Take nothing away from Nicole May and Jordy Bahl, who formed an outstanding tag-team duo in holding host Hawaii without a hit in Saturday’s 9-0, five-inning victory. It’s just that we’re all a little emotionally drained after Jocelyn Alo’s late-night (for  mainland clocks) heroics the previous day. But Oklahoma’s fourth no-hitter this season, including Bahl’s solo perfect game, moved the Sooners to 20-0 this season. File away April 30. Barring rainouts, that’s the date when Oklahoma could match Arizona’s Division I record 48-game winning streak. And depending on the fate of Texas, the Sooners may only play one game against a ranked opponent (Kentucky) between now and then.

5. Portland State ends Beavers 17-game win streak. No. 23 Oregon State came into Saturday not having lost a game since February 18. During that stretch, the Beavers’ pitching staff had allowed more than four runs once. Portland State made sure to strike early. The reigning Big Sky champs scored four in the first inning off of Tarni Stepto. The Vikings added two more in the fifth. Meanwhile, starter Olivia Grey improved her record to 10-1 holding the Beaver bats to one run and six hits. Oregon State needed a nine-run sixth inning to run-rule Portland State in the second half of Saturday’s doubleheader.

6. Georgia can’t lose. As mentioned, Alabama’s first loss leaves Oklahoma as the only undefeated team. It also leaves No. 19 Georgia with the second longest active winning streak among teams in the Power 5 conferences. The Bulldogs extended their streak to 16 consecutive games by beating South Carolina twice, 8-7 and 13-4, to clinch the SEC-opening series. The first victory was the completion of Friday’s game suspended in the third inning due to inclement weather. Sydney Chambley extended her own streak of five consecutive games with a home run, but upped the degree of difficulty by hitting two home runs in the nightcap (as well as a double and driving in five runs). She’s hit six of her nine home runs in the past eight days. On the wrong side of one of the eyebrow-raising upsets of the season at home against Boston on Feb. 18, the Bulldogs have outscored opponents 142-30 during the streak.

7. Florida closes strong to beat the Bulldogs. Mississippi State put a brief scare into Florida in the opening game of the SEC series by jumping out to a 3-0 lead. But the Gators didn’t panic. They scored eight straight runs and beat the Bulldogs 8-4 in Gainesville. Florida took the lead for good with a six-run fifth inning. Five different Gators tallied RBIs in the inning, with Skylar Wallace driving in the final two as part of a 2 for 3 day at the plate.

8. DenHartog has her own home run history. The Minnesota slugger put her team on the board to start its 8-0 over Drake. But Natalie DenHartog’s solo shot had a lot more meaning than being just a kickstarter. It was her 51st of her career, tying her with Jordanne Nygren for the most in program history. DenHartog did it in 151 games compared to Nygren’s 241 appearances. She’s had a power stroke in the month of March having hit eight already to bring her season total to 12.

9. Georgia State delivered first-year coach Angie Nicholson a memorable win. The Panthers opened Sun Belt Conference play by defeating Louisiana 4-1. It was GSU’s first win in Lafayette, and second win ever against Louisiana. The game was played over two days, with Friday’s game suspended due to inclement weather. Georgia State was leading 1-0 at the time and returned on Saturday afternoon to secure Nicholson’s first Sun Belt win.

10. A perfect day for Texas Tech. Riley Ehlen hadn’t hit a home run since Feb. 22, 2020, when she was still playing for Loyola Marymount and the world was still a very different place. Texas Tech hadn’t won on a walk-off in, well, not quite that long, but May 2 of last season. Put those two together and you come up with this moment in Saturday’s 8-5 victory against Tulsa.

And the Red Raiders weren’t done. Getting in on the fun during what has been a week of perfection, Kendall Fritz threw a five-inning perfect game to beat Texas A&M Corpus Christi in the nightcap. It’s just the fourth perfect game of any length in program history.

11. Billie Andrews extends her hitting streak to 17 games. The Nebraska offense came into the weekend averaging seven runs per game. That has a lot to do with Andrews, Cam Ybarra and Sydney Gray. A double early in the game already extended her streak, but Andrews had more in her back pocket against Boston. After her sister, Brooke, hit a homer to give Nebraska the lead, Billie hit a two-run blast, her 13th of the season, to put the 5-2 win in hand. Andrews will likely finish the night with the most homers in the country thus far and an average over .450 as she’s only gone hitless in one game this season.

12. Forecasting a series-opening date. George Washington and Saint Joseph’s will eventually play their Atlantic-10 opening-series. At least they hope they will. Inclement weather conditions in the Philadelphia area have forced multiple scheduling changes over the last few days. In the latest update, the teams will now square off on Tuesday with a doubleheader and a single game on Wednesday. Both days have a noon ET first pitch. As a result of all the changes, GW had to postpone a non-conference game against Hampton that was scheduled for Tuesday.