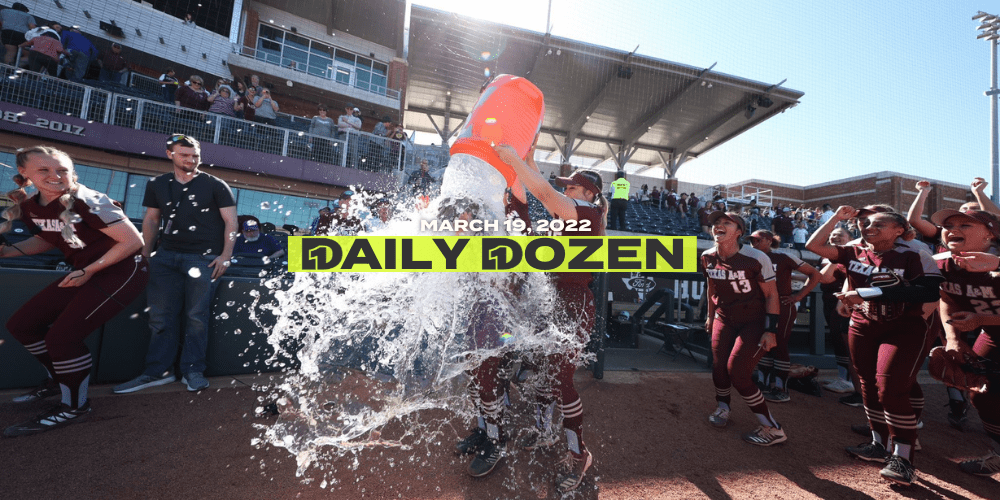 1. Makinzy Herzog pitches the game of her life. Herzog has helped beat Florida by hitting a home run off the former national player of the Year (Kelly Barnhill in 2019, when Herzog was a Florida State freshman) and by shutting out the Gators. We’re not sure who else is in that club, but we’re not going out on a limb to suggest it’s a small list. After Aggies freshman Emiley Kennedy gave her team a chance to win with a strong effort in the circle Friday, Herzog did her one better Saturday and gave the fifth-ranked Gators no chance to win in Texas A&M’s 5-0 victory in College Station. Herzog struck out a career-best 15 batters and allowed just three hits and one walk — getting all the run support she needed on Shaylee Ackerman’s first inning grand slam. Florida batters had more than four strikeouts just three times all season before Saturday, and despite some shaky run production of late, the three hits still represented a season low. Texas A&M coach Jo Evans said Herzog is more composed and willing to attack hitters this season. Saturday, it was impossible to argue otherwise.

2. Faraimo continues to dominate. Megan Faraimo’s highest strikeout total vs. rival Arizona was 10 in Tucson on May 8, 2021. The redshirt junior decided to set a new record, striking out 11 batters in front of a sold-out crowd at Easton Stadium in Los Angeles on Saturday evening. The UCLA ace tossed a complete-game two-hit shutout in the 5-0 victory over Arizona. Delanie Wisz doubled to right center in the first to put the Bruins on the board followed by a Senaca Curo single in the fourth. A Maya Brady solo shot in the sixth sparked a three-run inning to put the Bruins on top 5-0.

3. Prange delivers for Tide. Alabama third baseman Ashley Prange has been stung by defensive errors in the last few games. But the Ohio State transfer showed her resiliency with a key offensive contribution to help the Tide clinch the series over Kentucky with a 3-2 win at Rhoads Stadium. Prange hit a two-run home run in the first inning to give Alabama a lead it would never surrender. Jenna Johnson drove in the game-winning run in the fifth for a 3-1 lead. Lexi Kilfoyl got the win for Alabama, allowing two earned runs on seven hits with seven strikeouts. Miranda Stoddard provided a quality start for Kentucky. She allowed three earned runs on five hits in 6.0 innings. Normally, that would be enough for the Kentucky offense to pull out a win. But Alabama’s staff has held the Wildcats to just two runs in both wins. The Tide will try for the sweep on Sunday.

4. You have to walk (off) before you can run. Cal freshman Acacia Anders went hitless in her first taste of Pac-12 softball. Apparently, she’s a quick study. Anders went 4-for-4 in Saturday’s rematch against No. 7 Washington. The third hit established her new career high for hits in a game. But as you will see below, it’s the fourth one that is going to stick in the memory bank for quite some time. Cal’s victory leaves the series to be decided Sunday. Washington played without Sami Reynolds, who left Friday’s game after being hit in the head by a pitch.

5. Danielle Williams goes seven innings the hard way. Nice reliever that Northwestern has there. Maybe she’ll work her way up to starting one of these days. Calling on Williams out of the bullpen in both ends of a doubleheader, No. 9 Northwestern defeated Ball State and No. 16 Missouri in Columbia. But the relief stint against the Tigers, like the game itself, was anything but ordinary. Williams pitched the final seven innings and struck out 13 to secure Northwestern’s 9-6 victory in a 10-inning epic that ended only with the addition of the international tiebreaker in the 10th inning. Northwestern’s ace was as good as the strikeouts indicate, but she wasn’t perfect — she was in the circle for five of Missouri’s six runs. The slack she needed came from Rachel Lewis’s game-tying home run in the top of the seventh, her second of the game, and left fielder Angela Zedak’s throw to nab the potential winning run at the plate for the final out in the bottom of the seventh. In addition to the game-saving throw, Zedak drove in four runs.

6. Texas-sized sweep. The Longhorns may have tweeted their mega comeback into existence. The “Texas Fight” was on full display as they rallied from a six-run deficit to beat LSU 11-10 on a walk-off two-run double with two outs from McKenzie Parker to sweep visiting LSU in a three-game series. Texas extended its unbeaten streak to 11 straight games. The Longhorns trailed LSU 10-4 in the sixth inning. But Janae Jefferson drove in a run, Mary Iakopo had a two-run single and Courtney Day roped a two-run double to cut the deficit to 10-9 entering the seventh. Down to the final out, Jefferson reached base on an error and Mia Scott singled. That set the stage for Parker’s heroics to secure the non-conference sweep. Texas posted back-to-back shutouts in the opening two games of the series, beating the Tigers 3-0 on Friday night and 4-0 in the first game of the Saturday doubleheader. Estelle Czech threw a three-hit shutout in the series opener and Hailey Dolcini followed with a one-hitter in Game 2.

7. Billie Andrews stretches hitting streak to 23 games with a home run. South Dakota just about made itself college softball’s villain of the day. The Coyotes walked Andrews in her first two plate appearances in Saturday’s game (Andrews had earlier extended her hitting streak to 22 games against Tulsa). Would the streak end with a fizzle? Not so fast. In what proved to be her final plate appearance, Andrews hit her 15th home run of the season in the fourth inning to provide the final run in Nebraska’s eventual 3-1 victory. The steak wouldn’t have ended if Andrews didn’t register a plate appearance, but South Dakota certainly left Andrews with little margin for error. She’s now four hits away from cracking the top 25 for longest streaks in Division I history. Sara Graziano holds the record at 43 games.

8. No. 18 Clemson finally gets an ACC win, but No. 7 Duke finds a silver lining. Clemson scored five runs in its first four ACC games. The Tigers scored eight runs in the fourth inning of Saturday’s game at Duke. They were a tad overdue. At risk of falling out of the race, the defending regular season champions instead leveled the series against the Blue Devils with a 10-2 victory in five innings. Millie Thompson got the win, which should be no surprise. She’s allowed just five runs in 16 innings against the Blue Devils over the past two seasons. But for as much as the Blue Devils may want to forget the day — from Jala Wright struggling with illegal pitches and her control early to the errors that fueled Clemson’s big inning — it wasn’t entirely bad news. Out since early this month, when she fouled a ball into her face, Kristina Foreman returned with a protective mask in the field and an additional helmet cage at the plate.

9. South Carolina snaps mistake-prone Auburn’s streak. Auburn may want to ball up the box score from Saturday’s game and burn it. The Tigers finished with seven – yes, seven! – errors while giving up 18 hits in a 10-7 series-opening loss to South Carolina in 11 innings. The Gamecocks took advantage of three errors in the 11th to score three unearned runs and snap Auburn’s 16-game winning streak. Only three of South Carolina’s 10 runs were earned. Auburn’s Maddie Penta (15-1) suffered her first loss of the season, allowing seven hits and four runs (none earned) with five strikeouts. Shelby Lowe and KK Dismukes gave up one earned run and two earned runs, respectively. South Carolina was in position to win after scoring three runs in the top of the seventh, but Auburn’s Jessie Blaine hit a three-run home run to send the game into extra innings. Katie Prebble, Aaliyah White and Carlie Henderson each had three hits for South Carolina.

10. UMBC’s Courtney Coppersmith remains unhittable. Coppersmith has faced 101 batters this season. Five of them hit singles. None of them got extra bases. And 60 of them struck out. So how do we think she’s doing? Coppersmith was at it again Saturday, striking out 15 batters while throwing her second no-hitter in the past nine days in UMBC’s 4-0 victory against Quinnipiac. Eight of the first nine batters she faced struck out swinging, and only a walk in the sixth inning and hit batter in the seventh inning stopped her from pitching a second perfect game in nine days (she was perfect against Brown last weekend).

11. Gianna Mancha no-hitter keeps UCF in the spotlight. UCF did more than enough with its rugged early schedule to earn a quiet weekend at home against Furman. But even without a brand name foe like it had in a walk-off win against Georgia or marathons against Texas and Florida, UCF still found a way to make headlines. Mancha threw a six-inning no-hitter against the Paladins in the first game of Saturday’s doubleheader. It was Mancha’s second no-hitter and the 19th in program history. Just in time to whet the appetite for next weekend’s conference-opening series against Georgina Corrick and USF. Also of national note, Jada Cody had six RBIs across Saturday’s doubleheader sweep, extending her NCAA lead with 47 RBIs.

12. Missouri runs out of power against Stanford. The Tigers nearly played eight straight hours on Saturday. After falling to Northwestern in 10 innings, Missouri played another extra inning contest against Stanford. The Cardinal used its speed to force Missouri into a few tough choices in the field in the top of the eighth, leading to a four-run frame. Before Missouri had a chance to rebuttal, the lights went out at Mizzou Softball Stadium. The lights eventually came back on, but Alana Vawter kept the switch in favor of Stanford earning her 11th win of the season in eight innings.

Note of distinction: Joan Joyce added another milestone to her legendary career. The FAU head coach recorded her 1,000th career win when FAU beat North Texas 1-0 on Friday night. The victory was also the 1,000th in FAU program history. Joyce, 81, becomes the 12th active Division I coach with at least 1,000 career wins. Joyce, a multi-sport star during her illustrious playing career, has been inducted into 20 different Halls of Fames.

Bonus: This weekend had three critical series in the Atlantic 10, Big South and Missouri Valley between the top two teams in their respective preseason polls. George Washington, USC Upstate and Northern Illinois all swept doubleheaders Saturday to secure series wins. George Washington used a five-run sixth inning in the first game to win, and held off a Fordham comeback in the second leg. USC Upstate improved to 24-2 on the season by outscoring last season’s Big South NCAA Tournament representative Campbell 14-3. Northern Iowa outlasted Southern Illinois in a 17-13 barnburner and completed the Saturday sweep with a 8-6 win later in the day.