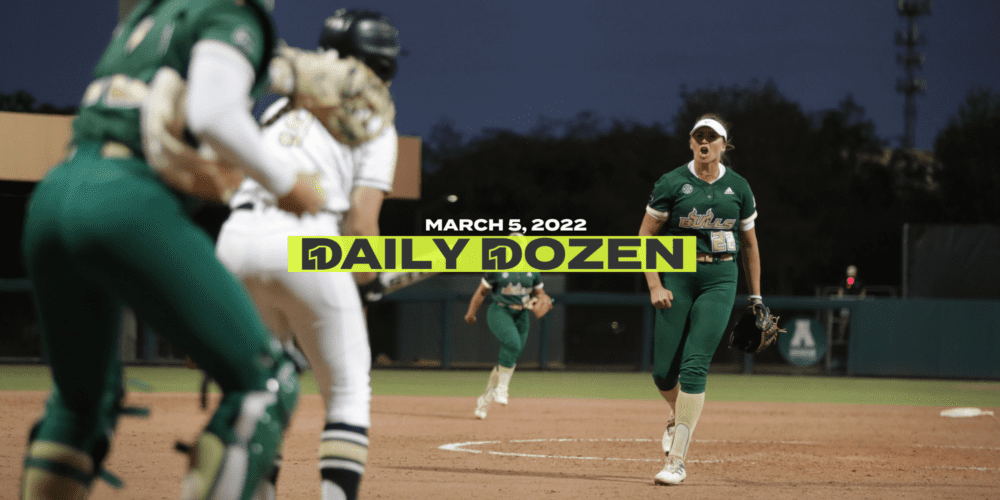 1. Cardiac Cats in Tucson. Neither Arizona or Texas State wanted to lose. There were four lead changes through the night as the two teams combined for 21 runs, 29 hits and a staggering 18 runners left on base. Nine different players had multiple hits and seven different pitchers were used. In the 14 half innings, a run was scored in 11 of them. After falling behind 5-2 early, the Wildcats responded with a five-run fourth inning, and that’s when the fun began. Texas State scored in every inning after that (and still lost) taking the lead in the sixth with three runs before giving up three runs right back. Sara Vanderford delivered a two-out, two-strike RBI base hit in the seventh to tie the game at 10, only for Carlie Scupin to hit a walk-off single in the bottom half. That’s after Arizona already made Saturday stressful for its Tucson faithful. RIght before the win over Texas State, Arizona had to battle Boise State. Oklahoma transfers Alycia and Eliyah Flores combined to go 4-for-7 with two home runs to put the Broncos up 4-1 heading into the bottom of the sixth inning. Arizona, which finished with 10 runners left on base in its first contest, finally found the clutch hit it needed. With two outs, Scupin and Sharlize Palacios drove in four runs to take the lead in back-to-back at-bats before earning the 5-4 win.

2. Lengthy at-bats, a wild pitch, a double steal and a pitcher knocked to the ground. The bottom of the third inning between Alabama and Texas sure didn’t lack entertainment. The Tide pushed across all the runs they would need in a 3-1 win to sweep the two games against the Longhorns at the Crimson Classic. Alabama’s Jenna Johnson led off the third with a walk, advanced to second on a bunt and reached third on a wild pitch by Texas transfer ace Hailey Dolcini that sailed very wide left. Ally Shipman worked a 14-pitch at-bat to drive in Johnson with an RBI groundout that tied the game 1-1. Dolcini got knocked to the ground in a collision with catcher Mary Iakopo on a popped up bunt, but was still able to secure the catch for the second out. Alabama then executed a successful double steal that allowed Dallis Goodnight to score the go-ahead run while Kaylee Tow was safe at second after Texas dropped the ball on the tag attempt. Alabama starter Jala Torrance struggled with her control, walking in a run with the bases loaded and two outs in the second inning for an early Texas lead. The Tide are without pitcher Lexi Kilfoyl while she recovers from an injury to her left foot. Montana Fouts, who earned the win over Texas on Friday night, relieved Torrance in the fourth inning. The All-American escaped a bases-loaded, two-out jam in the sixth by striking out Janae Jefferson with an outside pitch. The Tide added an insurance run in the bottom half on an RBI groundout by Kat Grill. Texas threatened with a runner on base and two outs in the seventh, but Grill caught Jordyn Whitaker’s fly at the wall for the final out. Texas had been struggling this season and fell out of the rankings. But the Longhorns pushed Alabama to the limit in both games. A matchup that didn’t seem as tantalizing turned out to be compelling.

3. Lemley shuts out Clemson. Maybe Virginia Tech’s loss to Charlotte earlier in the week made the Hokies extra motivated for the ACC opening series. They’ve dominated Clemson through the first two games. Freshman Emma Lemley went the distance yielding three hits and striking out 10 without a walk. Lemley each weekend has shown that she can be the X-Factor for Virginia Tech’s chances to make it to Oklahoma City. Not only is she absorbing innings from Keely Rochard’s workload, she’s also getting it done against ranked teams. Virginia Tech only scored four runs but left seven runners on base after producing 11 hits, this could’ve been ugier for the Tigers. Now Clemson has to try to salvage the series on Sunday, needing to show any life on offense but have to do so against Rochard most likely.

4. Alex Storako goes the distance and more for her first no-hitter. With all due respect to a competitive MVC program that is better than its 4-10 record precisely because it schedules like this, Drake isn’t the team that Michigan should need extra innings to dispatch. But with the way Storako pitched Saturday, the Wolverines had all the time in the world to find the run they needed. Storako struck out 13 and didn’t allow a hit in eight innings in No. 16 Michigan’s 1-0 victory against Drake. A sixth inning walk was all that separated her from a perfect game. The only real surprise is that someone who struck out 22 batters in a game a season ago didn’t already have a collegiate no-hitter.

5. Oregon’s Vallery Wong and Ari Carlson have hit 11 home runs since last Saturday. Florida has hit 14 home runs. Not 14 home runs since last Saturday; 14 home runs this season. The Ducks suddenly — and somewhat stunningly — have the most dynamic home run duo this side of Jocelyn Alo and Tiare Jennings. We told you about Carlson’s binge in yesterday’s Daily Dozen, and she added another in Saturday’s 9-1 victory against North Carolina. But Wong also hit a home run in that game, after two home runs earlier in the day in a 9-1 victory against UConn. When they woke up on Feb. 26, Wong and Carlson had a combined six home runs in more than 130 career appearances. Since that time, they have 11 home runs in 38 at-bats.

6. Even by Missouri standards, the production was impressive. The Tigers hit 10 home runs in two games on Saturday that were both shortened by run rule. They hit a program-record seven home runs in an 11-2 five-inning victory over St. Thomas, including four home runs in the first inning alone. Brooke Wilmes, Kara Daly, Alex Honnold and Kendyll Bailey all homered in the first inning. Kimberly Wert went yard in the second, Hatti Moore in the third and Julia Crenshaw went deep in the fourth. Wert’s home run placed her second all-time in program history for career home runs with 46. She is one big swing away from a tie for first place. In the opening game of the day, Mizzou hit three home runs in a 10-1 win over Bradley in six innings. Wilmes hit the walk-off homer to secure the win. Laurin Krings got the win in the circle, tying the career high in strikeouts she set last weekend with 14.

7. Deficits don’t faze Duke. The Blue Devils fell behind Georgia Tech for the second straight day in the ACC opening series, but once again staged an emphatic comeback. Duke trailed Georgia Tech 2-0 before scoring five straight runs in a 10-3 win in Atlanta. Kristina Foreman, Rachel Crabtree and Jameson Kavel kickstarted the rally with solo home runs in the second, third and fifth innings. Duke pulled away for good with five insurance runs in the seventh. The Blue Devils will try for the series sweep on Sunday.

8. Natalie DenHartog’s double-double lifts Gophers. One of the Big Ten’s most feared sluggers, DenHartog nonetheless had just one multi-homer game in her first 138 career starts. She did it twice more Saturday, hitting a pair of home runs in each of Minnesota’s games. And how those runs proved to be precious. Going 5-for-7 with six RBIs on the day, she made all the difference in a 7-6 victory against DePaul and 5-4 victory against Tulsa. DenHartog is now just four home runs shy of Jordanne Nygren’s program record of 51 and six shy of making it into the Big Ten’s all-time top 10.

9. Lacey Fincher breaks out. Fincher wasn’t the only well-known slugger to go yard at least three times Saturday (more on that in a moment). But Fincher might have been the most overdue. The Georgia standout took out a month’s worth of frustration on Massachusetts and Ohio in the Bulldog Classic, hitting three home runs and driving in seven runs as Georgia eased to 13-4 and 8-0 victories, respectively. Only nine SEC players hit more home runs than Fincher a season ago — just as only nine players had more home runs than her when the 2020 season shut down. But while she carried a .306 average into Saturday, the long ball was missing. No more. Her slugging percentage jumped from .513 to .696 in a day.

10. Corrick reaches another milestone. Yes, Georgina Corrick is back on this list doing something special. In her outing against Army, Corrick struck out the 1,000th batter in her career. She finished the night at 1,003 in her career and should eventually pass Sara Nevins (1,103) for the top spot in school history this season. This is a good time to point out that Corrick’s season ERA sits at 0.09, like under 0.10, because she’s allowed one earned run in 82.1 innings of work so far.

11. Jenna Perez puts a fork in them. The Loyola Marymount righty brought her best against the No. 24 Arizona State on Saturday night. In her two-hit shutout, Perez struck out a career-high 14 batters and didn’t allow a hit until the fourth inning. Perez, a UNLV transfer, now has fourth double digit strikeout performances this season, and coming against Power Five opponents (Mississippi State, Washington and Iowa State).