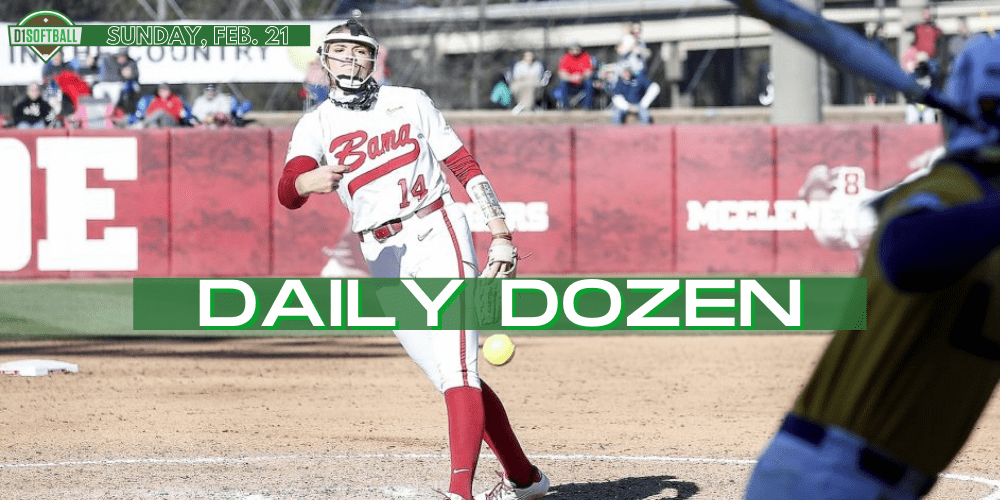 1. The marquee matchup of the weekend ended a bit early when freshman Bailey Dowling sent No. 5 Alabama to a 13-5 run-rule win over No. 7 LSU with a walk-off two-run double in the bottom of the fifth at Rhoads Stadium. The Tide (8-0) beat LSU (5-3) twice in two days, and finished the Easton Bama Bash undefeated. Dowling and Kaylee Tow prolonged their hot play. Both finished 3 for 4 with 5 RBIs. Dowling added a two-run home run and Tow scored three runs. The games didn’t count in the SEC standings, but they certainly sent a message.

2. Due to historic winter weather forcing cancellations, Texas got off to the latest start in program history by opening the season on Sunday at the Scrap Yard Blizzard Challenge in Conroe, Texas. The Longhorns began on a high note with a sweep of Wichita State and North Texas. Shea O’Leary and Lauren Burke led the way in the 8-0 five-inning win over Wichita State. O’Leary threw a one-hit shutout with four strikeouts and Burke was 3 for 3 with a three-run home run. Ole Miss transfer Molly Jacobsen earned her first Texas win in relief in the 5-1 victory over North Texas, allowing two hits and no runs in 3.2 IP. Freshman Ryleigh White got her first college start, giving up one unearned run on four hits with four strikeouts in 3.1 IP.

3. Plenty of programs would be happy to build a team around Grace Green and Shannon Saile. Oklahoma is deep enough that it wowed the nation during the opening week without them. But each used a season debut in Sunday’s 12-4 win against Houston to remind us they will be important parts of the puzzle. After sitting out last week’s tournament in Texas, Green hit a home run in her first at-bat — erasing much of the momentum the Cougars seized with a three-run first inning. The former Big 12 Freshman of the Year reached based in all three of her plate appearances in the game. Saile debuted in the first game against Houston, recording the final out, but she entered in a decidedly higher-leverage situation in the second game of the day. With Oklahoma leading by a run but two Houston runners on base and only one out, Saile struck out back-to-back batters to end the sixth inning.

4. One weekend, two important ACC series wins. Virginia Tech beat Florida State 6-0 in Atlanta to win a series over the Seminoles for the first time since 2011. Tech also took two out of three games against Clemson on Thursday and Friday to open ACC play. Keely Rochard (5-1) threw her third complete game shutout of the season, striking out nine batters and allowing just one hit. The junior has only allowed three earned runs in 37.0 innings pitched this season. Cameron Fagan and Grace Chavez hit back-to-back home runs in the fifth inning. Chavez has homered in four straight games.

5. Three wins in less than 24 hours. Not a bad weekend of work for Mary Haff. How did that work? Haff pitched all seven innings Sunday as No. 17 Arkansas beat No. 22 Baylor 7-2. She settled down after a rocky first inning and allowed just two hits over the final six innings. That effort came roughly 12 hours after Haff pitched the final 8 2/3 innings in a 14-inning marathon win against McNeese State. Saturday’s extended relief required 149 pitches, but she needed just 81 pitches Sunday to shut down Baylor in that team’s first game of the season. All of which left her with plenty of energy to enter in relief again in Sunday’s second game and pitch the final four innings in another win against McNeese State.

6. Iowa State sophomore Alesia Ranches hit a walk-off, two-run double to help the Cyclones rally to beat Ole Miss 7-6 at the FAU Strikeout Cancer Tournament. Iowa State improved to 9-1, which tied for the best 10-game start in program history. The Cyclones trailed Ole Miss 5-0 in the third inning, but used the long ball to launch a comeback. Senior Sami Williams hit her fourth home run to lead off the fourth, and freshman Milaysia Ochoa crushed a three-run home run – the first home run of her career – to cut the Ole Miss lead to 5-4 after four innings.

7. Miami (Ohio) was one out from upsetting Mississippi State on the road last week but lost on a walk-off hit. It was five outs from upsetting No. 23 Tennessee in the first game of Sunday’s doubleheader but lost when the Lady Vols rallied for six runs in the seventh inning. So credit to Courtney Vierstra for not leaving anything to chance the third time around. The senior pitcher shut out the Lady Vols in the nightcap, Miami’s 2-0 win its first against a ranked team since beating fifth-ranked Tennessee in a 2012 NCAA regional in Knoxville. Miami will know how close it came to a remarkable 3-1 record, but rarely has a 1-3 start been harder earned.

8. Southern Illinois snapped No. 16 Mississippi State’s 17-game winning streak in a thrilling extra-inning 5-4 upset. Down to the final out in the top of the seventh, Jenny Jansen’s RBI single to right scored Maddy Vermejan for SIU to even the score at 5-5. With the international tiebreaker in effect, SIU executed in the top of the eighth and held the Bulldogs in the bottom of the inning to extend its 14-game winning streak. The win marked SIU’s 30th all-time win over a ranked opponent.

9. There wasn’t much softball played over the past year. That hasn’t stopped Kentucky from piling up runs at a prodigious rate. The Wildcats wrapped up a 6-0 week with 14-0 and 10-0 wins against North Carolina Central and Mt. Saint Mary’s, respectively. They scored 55 runs in four games at the Campbell Invitational after picking up a quick 21 runs in a doubleheader at UNC Greensboro on Friday. A whole lot of people put up big numbers but none bigger than Kayla Kowalik. The third-year catcher entered the week with one home run in nearly 300 career at-bats. She slugged three home runs this week alone, hitting .750 (15-20) with 13 RBIs. But this isn’t a one-week phenomenon for the Wildcats. They’ve scored 248 runs going back to Feb. 21, 2020. That’s barely fewer than SEC heavyweights Alabama and Florida combined in that time. What remains to be seen is if that will translate to championship-caliber competition. Kentucky won’t face that until opening SEC play against the Gators in a couple of weeks.

10. Jadelyn Allchin hit two home runs, a double and drove in six runs in No. 3 Washington’s 17-0 win against Utah Valley State. That effort put something of an exclamation point on the Huskies’ attempt to bounce back from Friday’s loss against Nevada in the tournament in St. George, Utah. Washington won the subsequent three games by a combined 36-1 margin, needing just one more than the minimum 15 innings to do it. Allchin finished the week, which also included a non-tournament win against BYU, with a .636 batting average, three home runs and eight RBIs.

11. Plan ahead: Louisiana head coach Gerry Glasco will coach against his daughter, Tara (Glasco) Archibald, in college for the first time when Louisiana plays Eastern Illinois in its home opener on Tuesday at Lamson Park. The Ragin’ Cajuns finished 4-0 at the Green and Gold Classic this weekend, scoring 22 of their 26 runs (85 percent) after the third inning. Georgia transfer Ciara Bryan batted .500 (8 for 16) with eight hits during the weekend.

12. MJ Knighten is still searching for her first career head coaching win in her debut season leading the University of San Diego. The Toreros lost doubleheaders to San Diego State and Grand Canyon. They’ve been outscored 17-2. USD hosts Cal State Fullerton in a doubleheader on Monday.

BONUS: Haley Cruse laying it out for the win. The Oregon Ducks moved to 7-0 on the season after two wins against Fresno State.

How The Top 25 Fared: Week Two