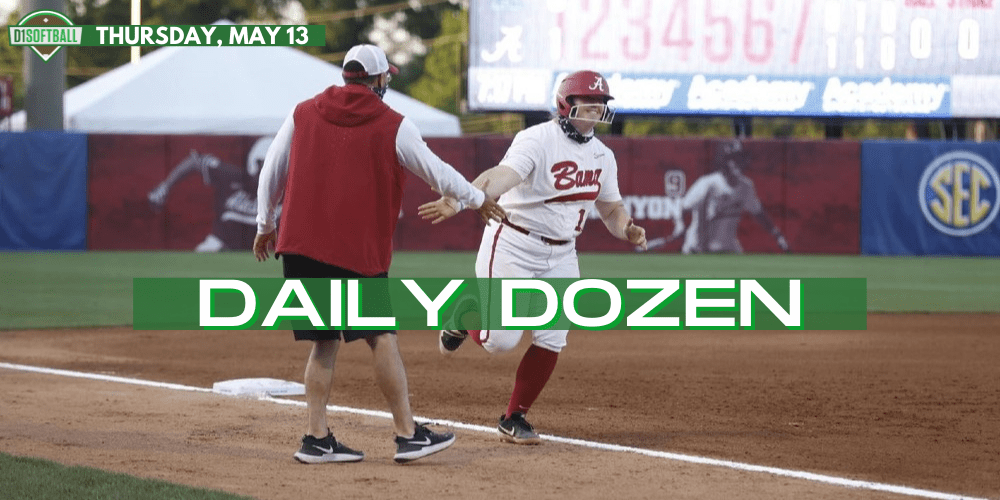 1. Alabama gave its fans plenty of record-tying milestones to cheer about in the Tide’s SEC Tournament opener. Slugger Bailey Hemphill and pitcher Montana Fouts played starring roles at Rhoads Stadium, with Hemphill tying the program’s career home run record and Fouts tying an SEC strikeout mark as No. 2 Alabama beat No. 6 Kentucky 5-1 in the quarterfinals. Hemphill hit two home runs to move into a first-place tie with Kelly Kretschman for the Alabama career record at 60. Hemphill’s two home runs also tied the SEC Tournament single-game record. Fouts was electric as usual, tying the SEC Tournament single-game record with 15 strikeouts to match the record Alabama’s Alexis Osorio set in a 10-inning win over Texas A&M in 2017. It was the 15th double-digit strikeout performance of the season for Fouts, including her ninth against a ranked opponent. Hemphill belted a solo shot in the first inning to open the scoring and then capped the scoring in the fifth with a two-run home run to left-center.

2. Pitching with a sore back and bandaged finger, Ashley Rogers delivered another gritty performance for No. 7 -seeded Tennessee to spring the first big upset at the SEC Tournament. Less than 24 hours after throwing 174 pitches and striking out 13 in nine innings of a walk-off win over Texas A&M, Rogers returned to the circle to throw 119 more pitches in a 1-0 victory over Arkansas. Rogers recorded a 1-hitter with 12 strikeouts and her catcher Ally Shipman hit a solo home run for the Lady Vols in the quarterfinals. Arkansas had its own injury issues. Slugger Braxton Burnside, the SEC’s home run leader, missed the game. But Arkansas redshirt junior Mary Haff was up to the challenge of a pitching duel with Rogers. Both carried a no-hitter into the fifth inning before Shipman provided the only run Rogers would need. She waited on a two-strike changeup and belted a home run over the left-field fence. It was one of only two hits Haff surrendered. Given Rogers missed last season with a back injury and was grimacing in pain for the second straight night, the Lady Vols may play it safe in the semifinals and allow their ace to rest up for the NCAA regionals.

3. UCLA played home run derby in the desert against Arizona to open the final Pac-12 series of the season with a bang. The Bruins belted five home runs, including two by freshman Maya Brady, to run rule the Wildcats 8-0 in five innings at Hillenbrand Stadium. UCLA (39-3, 17-2 Pac-12) moved one win (or one Washington loss) away from clinching the program’s 11th Pac-12 title. Aaliyah Jordan, Rachel Garcia and Delanie Wisz also hit home runs for UCLA to snap Arizona’s 30-game home winning streak. Hosting their first ranked opponent at Hillenbrand this season, Arizona suffered its first run-rule defeat at home and was shut out for the first time at home since 2015. Garcia pitched a two-hit shutout for the Bruins.

4. Cammy Pereira entered Thursday with one home run in 38 games this season. The Clemson redshirt junior had two in six innings against Georgia Tech. Periera’s twin long balls and Valerie Cagle’s pitching carried top-seeded Clemson to a 2-0 quarterfinal victory in the program’s ACC Tournament debut. Cagle (25-4) matched her career high with 14 strikeouts while throwing her 10th complete-game shutout in the quarterfinal win.

5. Portland State only won four games away from home in the regular season. Second-year pitcher Olivia Grey won two in the span of a few hours Thursday. Grey and the Vikings beat Northern Colorado in their Big Sky tournament opener, then turned around and stunned top seed and host Weber State 2-1. Grey allowed just six hits and one earned runs across 14 innings in her starts. That’s what postseason softball is all about. Weber State is still alive but now one of a number of favorites across the country facing long roads back.

6. Florida had the Mississippi State Bulldogs right where it wanted them. Trailing 2-0 entering the bottom of the fifth inning, the Gators worked their comeback magic yet again in the late innings. Kendyl Lindman gave top-seeded Florida the lead with a 3-run home run and Charla Echols added a three-run shot of her own in the sixth for insurance as the Gators beat No. 9 MSU 6-2 in the SEC Tournament quarterfinals. It was the fifth comeback victory in the last seven games for Florida. It also snapped MSU’s eight-game SEC winning streak. But the late-season run by the Bulldogs was likely enough to get them into the NCAA Tournament as an at-large selection.

7. DePaul’s reign atop the Big East is over. Villanova bounced the three-time defending champions in an unlikely elimination game between the top two seeds. Megan Kern’s grand slam in the top of the seventh inning helped turn a tense game into a comfortable 9-1 win for the Wildcats. Paige Rauch went the distance in the circle for Villanova and totaled 13 innings between that effort and an earlier loss against UConn. The Big East Pitcher and Player of the Year also walked seven times as Villanova’s leadoff batter. But it’s UConn and Butler that control matters after opening wins. The Huskies and Bulldogs meet Friday for a place in the final.

8. The seeding suggested George Washington and Saint Joseph’s would eventually meet in the Atlantic-10 tournament — but not for opening-day survival. After the top two seeds were on the wrong end of upsets earlier in the day, George Washington survived to play another day with a 8-0 run-rule win against Saint Joseph’s in an elimination game. It’s still a long road back for the Colonials, who must beat either Fordham or Dayton (which shut out the top seed 2-0 to open the tournament) on Friday and then beat the other one twice on Saturday. If not, a team ranked No. 36 in the RPI will join a crowded bubble.

9. Playing like the team that upset Oklahoma State and held its own against Oklahoma, fourth-seeded Kansas City beat top-seeded South Dakota State 4-2 on the opening day of the Summit League tournament. Kloe Hilbrenner’s three-run home run in the top of the seventh proved to be the winning hit. Unable to stem the tide in relief in that loss, South Dakota State standout freshman Tori Kniesche shut out North Dakota in an elimination game later in the day to keep the Jackrabbits in the bracket.  Also on a busy Summit Thursday, Omaha’s Kamryn Meyer no-hit North Dakota (rough day at the plate for UND) to keep the Mavericks on a path to the title game.

10. At least bubble teams nationwide caught a break after sweating out the late innings of Boston University opening the Patriot League tournament against Army. Having already scored three runs in the inning to cut its deficit to a single run, Army had the bases loaded and still no outs against undefeated Boston University ace Ali DuBois in the sixth. But back-to-back force plays at the plate helped the Terriers escape and remain in the winner’s bracket. The Terriers aren’t an at-large lock, but teams like Northwestern, South Carolina, South Florida, Troy would prefer they stay out of the at-large pool altogether.

11. The MAAC remains the epicenter of bracket carnage, and Marist is largely responsible. Two of the top three seeds didn’t even make it out of last weekend’s quarterfinal series to reach this week’s four-team double-elimination final round. The big upset was eighth-seeded Marist eliminating top-seeded Monmouth. Well, the Red Foxes followed that up Thursday by beating host and No. 2 seed Canisius 5-0. Marist ace Calista Phippen’s four-hit shutout puts the Golden Griffins on the verge of elimination. Marist was just 12-10 this season entering the quarterfinals.

12. Count Alcorn State among Thursday’s giant slayers. The team from Mississippi eliminated No. 1 seed Texas Southern 6-5 in 10 innings in the SWAC tournament. A super senior who ranks among the program’s all-time leaders in most major pitching categories but who also lost twice to Texas Southern this season (most recently in her team’s tournament opener two days ago), Ambria Dorsey went all 10 innings for Alcorn State.