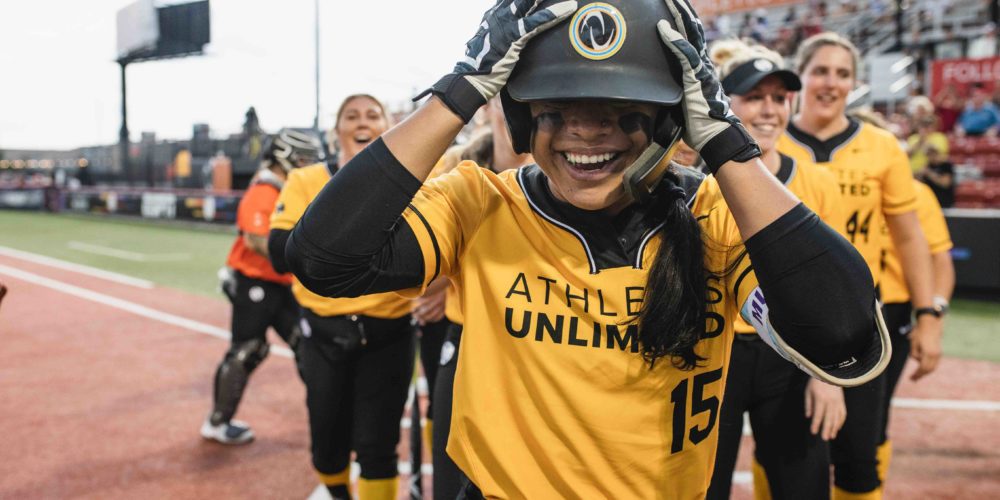 As she waited to receive a pitch during the penultimate weekend of the Athletes Unlimited season, Dejah Mulipola offered a thought that fell short of searing insight into the particular moment or the craft of catching but captured something more profound about the league.

“To be here now, on a sunny day, playing some softball,” Mulipola mused during the in-action interview with the broadcasters, “I don’t know what more you can ask for.”

You could always ask for a championship. Or in Mulipola’s case, you could go out and take it with one more massive swing of the bat in a summer full of them.

The overall leader for most of the past two weeks, Mulipola slipped out of the top spot on Saturday and risked falling just short of an AU title for the second time this summer (she finished third in the inaugural AUX competition in June). But not much Mulipola hits ends up just short, and her tape-measure blast in the sixth inning of the season’s final game put at least the symbolic finishing touches on the title she officially clinched with the final out of a 10-6 victory.

In addition to becoming the first non-pitcher to win an AU-universe title, Mulipola also matched the single-season record with her ninth home run and became the first player to lead the league in batting average, home runs and RBIs (as well as slugging and on-base percentages).

Down to the final out of the final game, the women of Athletes Unlimited offered not an attempted facsimile of established professional sports but a model for a different way to do things — different beyond the quirky scoring system and weekly drafts. You can bring together 60 accomplished and relentless athletes, a quarter of them former Olympians and most All-Americans, and create an environment that celebrates both competition and joy, excellence and balance.

That feels not only refreshing but revolutionary.

Sunday, there was tension. Plenty of it, with most of the top 10 still able to entertain the idea of finishing the day atop the leaderboard. And in addition to any athlete’s almost instinctual desire to want to win, compensation in AU is also partly tied to a player’s final rank. In the simplest terms, everyone had money on the line Sunday.

Still, as Haylie McCleney stepped into the box to lead off the opener against Denham, the top two players on the leaderboard meeting right away, she also got a quick arm around the shoulder and squeeze from Gwen Svekis, Denham’s catcher. It was a quick show of respect and collegiality. Then Svekis went to work trying to frame the pitches that would send McCleney back to the dugout empty-handed.

It would be easy to misinterpret that moment, especially in a day and age when willful misinterpretation runs rampant — nuance and context matter little in a world of hot takes. It would be easy to use it as proof that they didn’t care enough or the league wasn’t serious. That the title can’t mean all that much if combatants don’t act like, well, combatants.

Athletes Unlimited offered a lot of those moments over the course of a season, whether the Harry Potter glasses members of Team McCleney sported in the dugout earlier in Week 5 or rookie Mia Davidson laughing at herself after blowing a tire rounding first and crawling back to the base. Whether lifelong infielder Tori Vidales hollering with delight while catching a fly ball in a necessary start in the outfield or Sis Bates doing, well, everything that makes her Sis Bates.

The league’s strength is that it doesn’t shy away from those moments. The players won’t let it. It’s their league, and in its third year, they have shaped it into what they want it to be.

Listen to Bates, the shortstop who could be mistaken for the world’s savviest 30-year-old any time a ball is hit her way and a teenager in the park with her friends the rest of the time.

“I wanted to build relationships with these people who I have been admiring since I was a little girl,” she said earlier this season of her motivation to join AU. “I wanted to keep growing in my love and joy for the game with people that I love. I’m 24. If the game’s not fun for me anymore, there’s no use in playing it.

“I went into this with that mindset, and it has been the most joyous thing ever.”

That doesn’t have to be an either-or proposition, even if we’re raised from youth sports on to think that fun comes at the expense of results.There’s a time for fun, and a time to be serious. Well, yes, but those can be the same times. And while it might be a difficult distinction for grade schoolers, elite athletes are exactly those responsible and mature enough to pull it off. And who should be encouraged to try.

“I’m a very competitive gal,” Bates said. “Even when I’m loving my teammates — and loving the people on the other team because maybe they were your teammates last week — you also want to win because winning is really fun, too. There is a balance between being competitive but also bringing love and joy to the people around you.

“It’s a difficult balance. But in AU, I don’t know, all the women have a really good idea of how to do that.”

No player in AU needs to prove her competitive credentials to anyone. And that’s precisely the point. They have gone through all of that and come out the other side. From the most cutthroat travel teams to college programs playing in multi-million-dollar stadiums, they’ve played softball when the spotlight and pressure from parents, coaches, fans, media and others makes it barely a game anymore.

That isn’t to say they are victims in that process. They sought those stages, driven by whatever it is inside people that produces national championships and world records. And yet they did it without the prospect of the same financial riches that await male peers in baseball — Sierra and Sydney Romero’s younger brother Mikey will earn more as a first-round pick in the most recent MLB draft than his siblings’ likely combined earnings as professionals.

So, what’s left when you walk off the World Series stage in Oklahoma City for the final time? When any Olympic future is distant at best? What’s left to stave off bitterness or regret?

The game is left. Your friends are left.

So the greatest competitors in a sport built a league around those things.

Sunday, Team Denham’s Rachel Garcia did everything in her power to clinch the title for her teammate. After nearly 150 pitches in a shutout a day earlier, she came out of the bullpen and held Team McCleney scoreless over the final three innings. You don’t put your body through that if winning doesn’t mean anything, if you aren’t driven to compete.

Yet on the eve of AUX earlier this summer, Garcia talked about her motivation for continuing to play. She wasn’t sure she wanted to keep going after the grind of her final season at UCLA and competing through injury in an Olympics that nonetheless ended short of her goal of gold.

Asked if that had always been her motivation or if it represented a change of focus, she chose the latter. She didn’t elaborate, which sometimes says plenty.

A self-acknowledged introvert, Garcia isn’t ever going to be the one wearing the Harry Potter glasses in the dugout or dancing after a big strikeout. But at the end of her first summer in AU, in the manner comfortable for her, she sure seemed to still be having fun.

It was the same sentiment that greeted Danielle O’Toole when the pitcher left the field for the final time — and the same sentiment that led Aubrey Leach to jog over to O’Toole in tears after hitting the double that ended the pitcher’s career. Leach didn’t need O’Toole to be the enemy in order to do everything she could to get the hit. Those who bring you joy are the ones who bring out your best.

To succeed, Athletes Unlimited must be more movement than moment. By all accounts, from facilities and support services to compensation, it has been the gold standard of professional softball operations – which for most of this century struggled to rub two pennies together. But like all that came before it, it is still a part-time operation, full of full-time college assistant coaches and recent college graduates who can afford to delay entry into the real world.

Viewership numbers will soon enough reveal how much the first year of a multi-year broadcast agreement with ESPN helped the league broaden its audience this summer. We’ll see which players return next season and who might be tempted by Lauren Chamberlain’s equally aspirational Women’s Pro Fastpitch, as Jocelyn Alo, among others, was this year.

But in this moment, as the most exciting title race yet played out across Sunday’s doubleheader, a league’s growth from concept to reality makes you want to believe.

The entire sport, in its own way, is the product of passion and ingenuity on the part of generations of women. They took softball and made it the game that it is today, not an offshoot of baseball but something with its own soul and history. Maybe a new generation of women can do the same with the model of professional sports. Make it theirs. Make it work. Make it strong. Make it joyous.

In the end, even if the sun wouldn’t cooperate through a late wether delay Sunday, the eventual champion put it best more than a week ago.

Playing softball with your friends on a summer evening. What more could you ask for?

Rookie of the Year: Shannon Rhodes, OF

Now, let’s take a look at how the title was settled Sunday.

To the season and to an all-time great. Chidester received a deserved but admittedly manufactured curtain call after a lengthy weather delay, able to leave the field to a standing ovation before play resumed. But the player who served Team USA for a decade and made herself into an Olympian had one more self-made moment in her. Batting with two outs in the top of the seventh, she produced the softball equivalent of riding off into the sunset by launching a a home run into the lights.