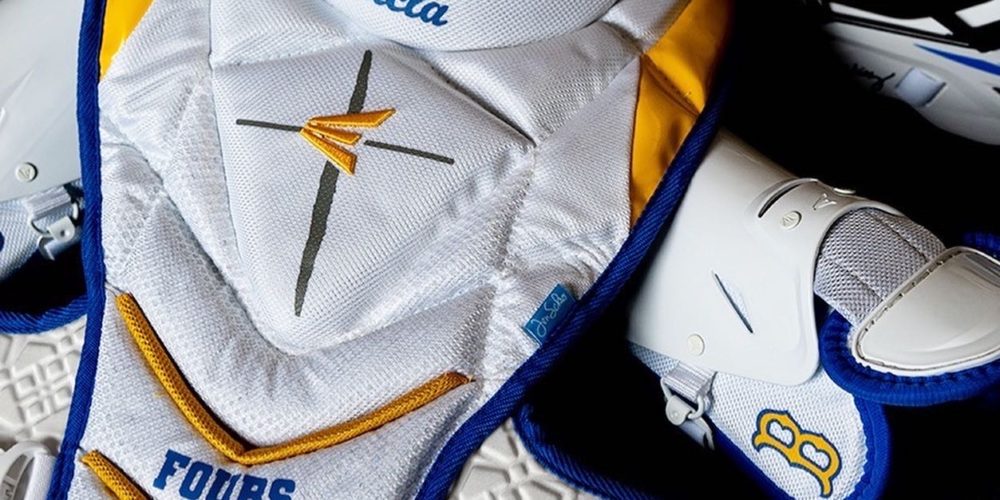 A catcher’s gear is designed to protect, to be armor against whatever a game throws at it.

What if it also reminds the wearer of the strength that resides underneath?

The cage on the face mask will deflect foul tips. The chest protector will absorb errant pitches ricocheting off the dirt. But even the most modern materials can’t help with the courage to take on any challenge or the strength to thrive come what may. Protection comes from the people you care most about and the person you are because of them.

So, what if, in pictures, words and symbols, the tools of a catcher’s trade tell that story?

For UCLA fifth-year senior Delanie Wisz, that will be the case when the Bruins put their season on the line Friday against Northwestern in a World Series elimination game. Although versatile enough to be indispensable at multiple positions, the All-American has played her biggest role this season behind the plate. If she takes her place behind the plate Friday, she will be wearing new customized catching gear that explains exactly how she got there.

The gear is the brainchild of UCLA softball alumna Jen Schroeder, forever the ambassador for catchers everywhere, and Julie Tobyansen, an Easton executive. Several months ago, they  collaborated on the idea to design custom equipment  for senior catchers playing for schools affiliated with the company, which also produces a signature line of catching gear for Schroeder.

Hoping to keep the project a surprise, Schroeder organized a Zoom call earlier this spring in which Delanie’s mother, Melissa, and sister, former UCLA player Stevie, spoke with designers about potential elements that would be meaningful to include. On Wednesday, they presented it to Wisz.

The most visible part of the resulting design is also probably the best known part of Delanie’s story. Within the greater shape of a cross across the chest protector, representing Wisz’s faith, the upright beam is an exact reproduction of the scar on Stevie’s chest from open-heart surgery.

Born with an enlarged heart and subsequently diagnosed with aortic stenosis, Stevie had open-heart surgery for the first time at 9 years old. Numerous surgeries followed, including one days after she graduated from UCLA and concluded her softball career in the World Series in 2019. An infection last fall led to yet another open-heart surgery, and complications unfortunately forced another procedure and hospital stay this past January.

Through it all, the sister who Stevie calls her best friend has been a constant. Much as Delanie  once served as bat girl for Stevie’s youth softball teams, the younger sister settled into the role of coffee procurer during the hospital stays. Every day, she would arrive, coffees from La La Land Cafe in hand, and the two would talk. Sometimes about Delanie’s softball. Sometimes about Stevie’s health. Often, when neither wanted to dwell on those familiar subjects, about nothing at all.

“We’d just sit there and enjoy each other’s presence,” Stevie said. “She’s always been there for me, always reminded me that no matter how hard it gets or what diagnosis I get, she’ll always be there.”

On the back of the chest protector is a larger design incorporating more elements that only she will usually see. Most prominent are the initials “HW” and the script “I may not see you, but I can feel you.” Both are tributes to Hunter Wisz, the older brother who passed away as a newborn. The script is the same as she has tattooed on her shoulder and is repeated on the inside of her catcher’s mask – the last thing she sees before play begins.

“Delanie feels almost as if she is living through or for him, that she was born because he passed away,” Stevie said. “I know he is with me, but I think she truly feels the most connected with him.”

Perhaps the challenge in all she experienced was finding her own place. Cherishing her connection with the older brother she never met and the relationship with the older sister she didn’t want to lose. But also believing as strongly in herself as she believed in them.

“I think Delanie, before she got into the Bruin uniform, is a very confident female,” UCLA coach Kelly Inouye-Perez said. “That’s her strength. She is confident.”

And yet it hasn’t always been easy. She didn’t immediately follow Stevie’s path to UCLA, instead beginning her college career at Loyola Marymount. After what she has in the past described as a toxic experience, she transferred to UCLA – only to see the pandemic interrupt her healing with the game and force the cancelation of the 2020 season.

“There’s been room for both,” Stevie said. “I think, deep down, Delanie believes in herself and knows that she’s good enough to play at the level she’s at now. I think she’s always knows that, and everyone has. But she’s experienced some things — whether bullying growing up or insecurity about her physical appearance or other experiences in softball that have tainted her perspective on her own play. It might have discouraged her a little bit in her belief in herself.”

“But once she got to UCLA and realized she’s good enough to play on this team – and her performance obviously showed that – I think that’s when she remembered her confidence and went after it.”

She has been almost unstoppable in her final season, UCLA’s leader in OPS and one of a handful of catchers in the nation who has an on-base percentage above .500. Relatively new to the position, she’s also an integral part of Megan Faraimo and Holly Azevedo developing into a pitching staff that somehow has an ERA almost identical to what it was a season ago with Rachel Garcia leading the way.

“She has built her confidence not only on the field and off,” Inouye-Perez said. “She is fit. She is healthy. She has fun. She loves her teammates, and she’s always been a fierce player. I think surrounded by this group and having the opportunity to be on this stage, she is shining.”

The gear will take care of the foul balls. It also tells the story of why she’s strong enough to withstand anything else.