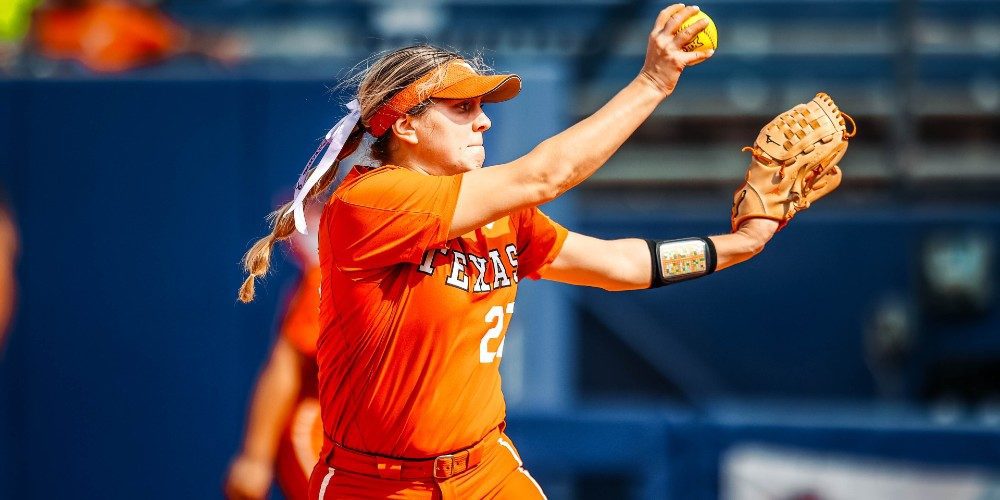 The image of ice bags tethered to a pitcher’s arm after games has become ubiquitous in sports. But the process of recovery goes much, much deeper in the modern age.

From compression to percussion to electrical stimulation to cupping to infrared clothing, athletic trainers are using every tool at their disposal to keep the aces participating in the Women’s College World Series in top form.

Although softball has come to embrace the pitcher-by-committee approach more than ever before, a few teams still largely rely on one arm to shoulder more of the load.

Williams has thrown 3,280 pitches in 244 innings for the Wildcats this season. The senior left-hander has appeared in 48 games and made 34 starts. In Northwestern’s super regional win over Arizona State, Williams threw 430 pitches over three consecutive days.

Dolcini has thrown 3,467 pitches in 202 innings this season for Texas. The senior transfer has appeared in 38 games and made 29 starts. In the Longhorns’ three regional games against Washington, Dolcini threw all 21 innings. She pitched in the first two games of the Super Regional against Arkansas before being held out of the final game.

Both started in their team’s opening games on Thursday at the WCWS in Oklahoma City. Dolcini went the distance to pick up the win over UCLA and earn Texas a day off in the new scheduling format implemented this year.

Williams was pulled after three innings in Northwestern’s loss to defending champion Oklahoma. The Wildcats will have to claw through the loser’s bracket to keep playing, beginning with an elimination game tonight against UCLA.

For Williams and Dolcini, recovery involves a mix of old-school techniques and new-age technology.

Texas athletic trainer Kassi Hardee tries to tailor a plan that works best for every player on the team. She uses percussion devices, electrical stimulation, foam rollers, ice, cupping and manual therapy among other methods. The Longhorns have a massage therapist traveling with them on the road for the postseason.

“It’s not like you throw the kitchen sink and do all those things,” Hardee said. “Every student-athlete or pitcher has what works best for them, and we kind of cater to their needs and their preferences and how their body talks to me. There is no magic pill we have in our training bag.”

Northwestern trainer Courey Schaetzle always keeps a close eye on Williams when she’s in the circle to figure out the best plan of attack for her overall health.

“A lot of it is if she is showing any modifications on how she usually throws her pitches,” Schaetzle said. “If you can see she is compensating, you definitely want to check in and make sure everything is going OK and dive into what is causing that fatigue or pain or whatever that cause might be and then try to address that.”

During the second game of Texas’ Super Regional against Arkansas, Dolcini could be seen grimacing in the dugout as Hardee worked on her throwing arm and shoulder.

After she picked up the win, Dolcini said the UT coaches would have to drag her off the field to get her to rest. But her health took precedence in the series-finale, and freshman Sophia Simpson pitched masterfully to lead the Longhorns to the win and give Dolcini her chance to compete in the WCWS.

“The student-athletes are competitors, and if it’s potentially their last game, they might not always be totally honest on a 0 to 10 scale to tell you how bad their arm feels,” Hardee said. “I think the most highly underappreciated tool in the tool box is the relationship you have with the student-athletes. Getting to know them on all levels is so important so you can really tell how they feel. You have to develop that trust.”

The recovery plan at Texas is a group effort. Hardee meets regularly with the program’s strength and conditioning coach, nutritionist and sports science staff. They monitor data all season to try and help every player reach peak performance and not wear down.

For pitchers like Dolcini, the plan started months ago. She did extra cardio, strength training and band work with her eyes focused on reaching OKC.

“You can’t build stamina in the postseason. The foundation has to already be developed leading up to that,” Hardee said. “Hailey has worked at that from Day 1 so her legs aren’t getting tired and her arm is ready. She’s been building that to be ready for this.”

Williams is equally as diligent about her process. She doesn’t skip steps because she knows it could be the difference between a win or a loss.

“Having a good active recovery program is important, and Danielle is really good about communicating with us how her body feels,” Schaetzle said. “It’s about putting the entire picture together to make sure you do all the little things that make you feel the best. Even if you don’t want to really do it right now, it’s important to do the little things for your recovery.”

Hardee tries to sneak in treatment whenever possible. She will give a player a portable electrical stimulation tool on bus rides or ask them to wear compression sleeves on planes.

Texas has infrared clothing players can wear while they sleep that is designed to absorb heat and infrared radiation from their body and then emit that back into their muscles to increase circulation and decrease pain.

But for all the new gizmos and gadgets, one of the best methods is accessible to everyone.

“The unspoken hero in my opinion is sleep. Sleep to me is the best option for recovery for the full body,” Hardee said. “It’s also, unfortunately, one student-athletes can’t afford because they have school, tutors, practice and meals. There is always something, and they can’t get the eight hours that is ideal for most.”

Every pitcher’s dream is to still be throwing at this point in the season. All the work they have done behind the scenes to stay healthy and strong makes it all worthwhile.

The trainers helping to keep them as fresh as possible are just glad to have played some small role.

“Danielle is pretty amazing,” Schaetzle said. “It impresses me all the time how many pitches she can go and still be pretty solid.”