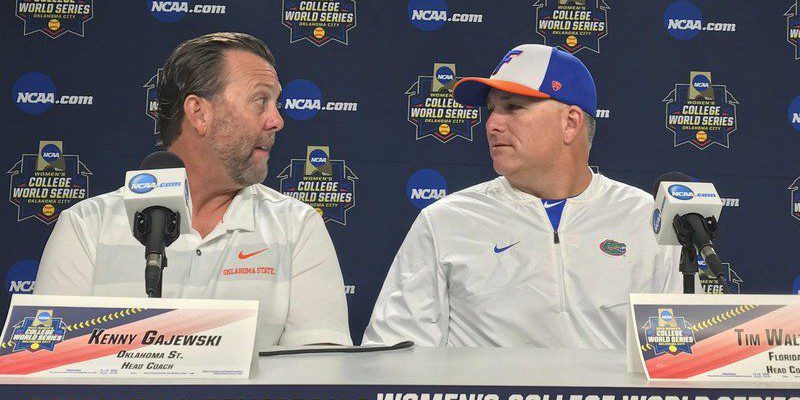 From JC to the WCWS: Old Coaches Proud of OSU’s Gajewski, Florida’s Walton

Dave Serrano didn’t have a television in his temporary residence in Anchorage, Alaska, but he planned to find one somewhere in the city on Saturday night.

Serrano didn’t want to miss the latest showdown between his former junior college pitchers at the Women’s College World Series.

Oklahoma State head coach Kenny Gajewski and Florida head coach Tim Walton were teammates at Cerritos College in 1991. Serrano was the head coach of the Falcons that season, his first head coaching job at the college level.

After more than three decades in the game at the Division I level, Serrano just retired from college coaching. But he couldn’t step away completely. Hence his stay in Alaska, where is leading a collegiate summer league team.

But no matter where he’s located, Serrano always keeps tabs on Gajewski and Walton.

“I am proud of both of them, but not surprised. I saw the characteristics when they were players,” Serrano said. “I just knew they were going to be leaders somehow. I didn’t know where their careers would be, but I knew they would be successful.”

Gajewski and Walton first met at Cerritos College, located about 20 miles from Los Angeles. Walton was a 17-year-old freshman and Gajewski was a redshirt freshman. The two Southern California natives became close friends and hung out together.

Both eventually transferred to Oklahoma and played on OU’s 1994 national championship team.

Gajewski remained in baseball for a few years as an assistant coach before transitioning to a career in field and turf management.

Walton switched over to softball and became an assistant at Oklahoma under Patty Gasso, another fellow Southern California native.

After a successful three-year stint as the head coach at Wichita State, Walton took over the Florida program.

He tried to lure Gajewski to join the Gators coaching staff, but Gajewski demurred. But as he got older, Gajewski realized he wanted to coach again and took a job at Tennessee in 2011 on Serrano’s staff as the director of baseball operations.

Walton and Gajewski eventually reunited in 2013 when Gajewski joined the Florida staff. They led the Gators to two straight national titles before Gajewski was hired at Oklahoma State.

Their college coaches and teammates have enjoyed watching every step of their journeys.

Longtime former Cerritos coach Ken Gaylord took over the program after Serrano’s one season in charge.

“Kenny and Timmy were just fun-loving guys and they were good team guys,” Gaylord said. “I think they have kind of instilled that as part of the culture of their programs and it has paid off obviously.”

“He’d be shagging batting practice and we had an outfield fence that was just wood planks that didn’t give much and he was always running into the fence,” Gaylord said. “I finally had to make him run every time I saw him dive close to that fence.”

Gaylord chuckled a few years ago when he was watching a Florida game.

“One of his girls dove at an inopportune time and I looked back and thought, ‘Timmy, what goes around comes around,’” he said.

Serrano remains in touch with Gajewski and Walton on a regular basis. He doesn’t take sides when their teams play each other.

He knows they are both intense competitors and won’t give an inch, especially when a national title is at stake.

“They were both projects as players coming out of high school. But one thing I could say about both of those guys is they had determination, heart and drive,” Serrano said. “I think that kind of sums up where both are at today in their careers.”