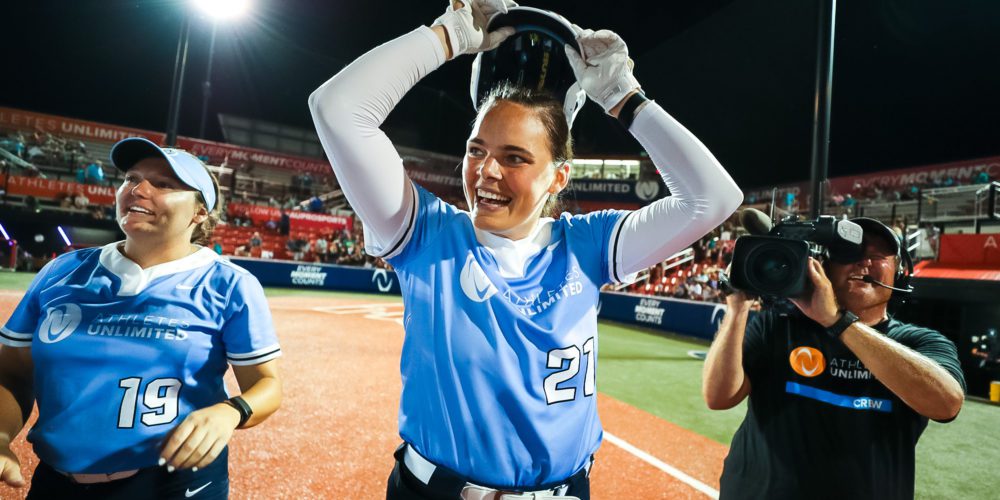 As one of Athletes Unlimited’s original architects and ambassadors, Gwen Svekis remains an agent of change. She and peers seek a sustainable model for professional softball, and they are willing to innovate their way to success. Times change, and the game doesn’t have to be a museum.

And yet as the third year of Athletes Unlimited gets underway with the debut of AUX in San Diego, Svekis is living proof that some things can’t be improved upon. No innovation will be more useful to a pitcher than a having a quick mind, agile body and loud voice behind the plate. Just ask Cat Osterman and Aleshia Ocasio, AU champions in 2020 and 2021, respectively. In a league in which teammates typically change every few days, it can hardly be a coincidence that each champion threw the vast majority of her pitches to Svekis.

A good catcher makes all the difference. Same as it ever was.

“From the way we communicated, the way she saw my pitches, the way we talked about setting them up, it just resonated right away,” Osterman said. “I guess it was love at first bullpen.”

From Catcher to Innovator

If some people are softball players who find a position, it feels more accurate to say Svekis is a catcher who found softball. There was a brief stint at third base when she first tried the sport and, by her own telling, a semi-disastrous few innings at pitcher (throwing to her sister). But almost from the beginning, she was most comfortable in a catcher’s gear.

“I had a love-hate relationship with hitting because hitting is all about failing,” Svekis said. “But catching was second nature for me, it came very easy. I loved it.”

She caught through high school state championships and club success with the Gold Coast Hurricanes. She caught through trips to the Women’s College World Series with Oregon, earning NFCA Catcher of the Year and All-America honors in 2018. For most of that time, it didn’t occur to her that she could continue catching beyond college. But when then-Oregon coach Mike White brought up National Pro Fastpitch, she decided to extend her playing days – at least for a summer before beginning graduate school and whatever came next.

Drafted third overall by the NPF’s Chicago Bandits, hers wasn’t exactly a movie-script summer. Sharing a roster with established catchers, she playing sparingly. Even in Chicago, with its own softball-specific stadium and the most consistent fan base in the eternally enigmatic league, she also puzzled as to why the fans who supported college softball in record numbers didn’t follow the same players when they moved to an even higher level.

There was little she could do for NPF, by that time altering teetering and soon dealt a final, fatal blow by the pandemic. But in the fall of 2019, after Svekis played her second NPF season, then-commissioner Cheri Kempf (now AU’s director of softball) called and asked her to meet with a group led by Jon Patricof and Jonathan Soros that was exploring a new professional sports venture. Svekis and a group that included current AU peers Victoria Hayward and Haylie Wagner flew to New York and listened to the pitch for Athletes Unlimited. As the original signings, they helped shape the league.

Which is how, before Svekis ever caught Osterman or reunited with Ocasio, her onetime high school rival and briefly club teammate, she recruited them to join the new venture.

In Osterman’s case, that required an assist from the scheduling chaos brought about by the postponement of the 2020 Olympics. Once that occurred in March of that year, Svekis got Osterman’s phone number and, essentially, cold-called her with a sales pitch. She knew the veteran lefty, who came out of retirement specifically to compete in the Olympics, needed a competitive environment to extend her comeback for an additional year. Svekis wasn’t exactly nervous talking to Osterman for the first time, but she didn’t want to come up empty on any questions. For the fledgling league, the legend would provide instant credibility.

Catchers always do know how to see the big picture.

When players eventually gathered in Rosemont, Illinois for the first season, the recruiter turned bullpen catcher.

“I threw the best I had thrown in a long time in that bullpen with her,” Osterman recalled. “That season was so important because I had to figure out how to get back to being Cat and throwing the way I knew I was capable of throwing. And I was throwing the best when she was catching.”

Pinpointing exactly why is no easier than explaining why two musicians or actors complement each other. It goes beyond the individual skills that either brings to the partnership. For Svekis, a penchant for assertive adaptability is clearly useful. More than a decade Osterman’s junior, she had enough confidence in herself to be deferential without being obsequious. She knew she had something to offer the pitcher. She also knew she didn’t know everything.

“Cat is not someone where I would go into a bullpen and tell her how to fix her drop ball,” Svekis said. “That is not my place at all, and I am very well aware of that. My relationship is much more – if she is curious what I’m seeing, I’m going to tell her. But she is so experienced and so elite in her craft that I’m not going to sit back here and nitpick her spots or her movement. She knows her stuff better than I know her stuff.”

That said, no one will ever describe Svekis as milquetoast – Osterman grows almost apologetic when she notes that Megan Willis, her catcher at Texas and for many years in NPF, might have been ever so slightly louder than Svekis (who would, Osterman is sure, protest that ranking).

“They’re the yin to my yang,” Osterman said. “They’re the fun and boisterous side to my serious and not-so-emotional way I play the game. That balance lets me find a middle ground and enjoy the game while still being serious and methodical and thinking about it.”

They ended up together by chance the first week, both drafted by team captain Jessie Warren. But from that point forward, with Osterman a captain in each of the remaining weeks by dint of her success, she wasted no time making Svekis a fixture as the No. 1 pick. The resulting championship was almost a byproduct. Osterman’s real goal was rediscovering her best self.

When Osterman returned for a farewell season in 2021, most penciled in Svekis as the automatic No. 1 pick. But perhaps unintentionally demonstrating the limitations of innovation, Osterman opted to mix things up. She thought she might be able to snag her catcher beyond the first round. It was difficult, after all, to pass on a chance to draft the likes of Haylie McCleney. But ever the cagey AU veteran, Victoria Hayward instead selected Svekis to pair with a pitching staff that included Ocasio. Osterman’s team still won the season’s opening week, but Ocasio finished eighth, best among players from the other three teams.

“Unfortunately, I think I tried to fix something that wasn’t broken in Season 2,” Osterman offered with a wry laugh.

Svekis and Ocasio shared a roster for four of five weeks in 2021. The first two times were good fortune. But with the title on the line and Ocasio by then a captain doing the drafting, she selected Svekis in each of the final two weeks.

After finishing fifth overall in the 2020 season, Svekis recorded another top 10 finish in 2021. And while she would have welcomed an opportunity to reunite with one of the best pitchers in the sport’s history for a second season, she didn’t mind the opportunity to prove she wasn’t riding any player’s coattails.

“I felt like I was Cat’s catcher, rather than Gwen Svekis, who caught Cat,” Svekis explained of how her initial success was perceived. “I definitely was excited to spread my wings a little bit and see what relationships I could develop elsewhere.”

Again, she proved assertively adaptable. Ocasio is a peer, someone who she competed against in high school (Ocasio laments her team never could solve Svekis and battery-mate Meghan King) and played alongside both for a brief time in club softball and again with the Bandits. Not only could Svekis more often take the lead with suggestions, but she needed to fill that role to best serve a teammate who continues growing as a star because she seeks constant feedback.

In a league without formal coaching staffs, Ocasio and Svekis worked through things together.

“She’s constantly seeking information, constantly looking for how she can improve or keep people on their toes,” Svekis said.

One thing to watch as AU’s third year unfolds, both in AUX and the championship season later this summer, is how pitchers handle the draft when it comes to catcher. In a league built on the idea of constantly shifting interpersonal dynamics, it may yet prove a secret weapon.

“When you have a certain connection with the catcher behind the plate, it makes you feel more confident and less stressed,” Ocasio said. “Gwen’s calling the game, and she’s one of the best pitch-callers I’ve ever had the honor of pitching to. That just makes my job so much easier.

“If you don’t have that camaraderie and that sense of trust and comfort with them, it’s going to be a little bit harder and a little bit more stressful.”

A good catcher can buy a call by framing a pitch. She can slow down an opponent’s running game and save a pitcher bases by blocking pitches. She understands each pitch’s strengths and weaknesses and reads the clues on any given night. It doesn’t hurt if she can hit a little, too.

But the greatest skill a catcher possesses? One that no amount of innovation will ever change? It comes down to understanding people.

“I think my personality inherently lends itself to being a catcher,” Svekis said. “I could have never been a pitcher — never had the eyes on me and all the attention and pressure on me. But I feel like I’ve always been a decent leader. I’ve always been good at fostering an environment of acceptance and encouraging people to be whoever they are.”