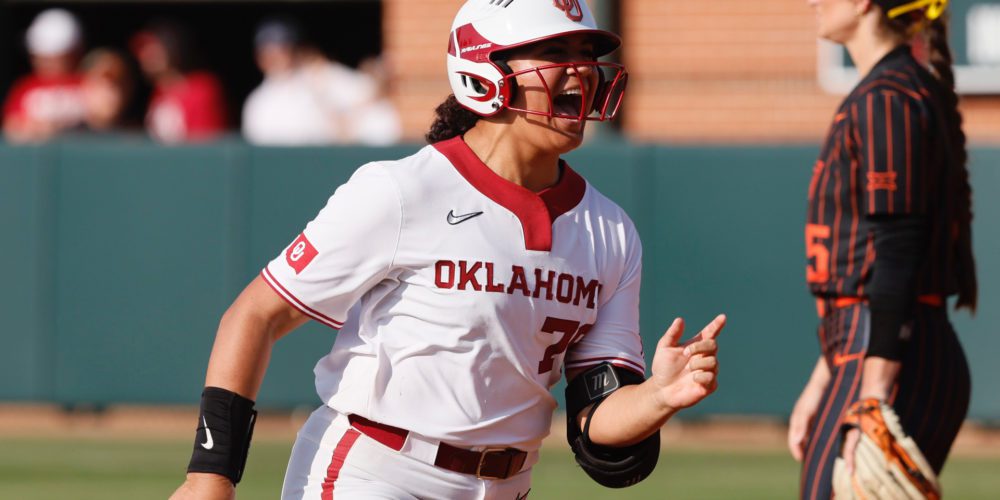 When Patty Gasso arrived at Oklahoma, her team still shared a field with the public. The Sooners played their home games at Reaves Park, across the street from Marita Hynes Field, the softball-specific stadium that opened in 1998 and which the Sooners outgrew long before announcing plans for a new home backed by a $12 million commitment.

These days, the Sooners struggle to stop the public from making itself at home in the team hotel. Call it the Jocelyn Alo factor.

A day before the start of the Women’s College World Series championship series, Alo spoke about life as she pursued and broke college softball’s career home run record, became the first non-pitcher to win back-to-back USA Softball Player of the Year awards and won a national championship. In recent days alone, there was a congratulatory text from Tom Brady (Alo and UCLA’s Maya Brady share club softball ties). And there were the battalions of kids waiting for autographs in the hotel – occasionally not merely in the lobby.

“We’re going to need a little more security now,” Alo offered as a joke that carried more than a touch of truth.

And that was before she hit two home runs in the opening game of the championship series, erasing a first-inning deficit and then giving the packed house at Hall of Fame Stadium more of what it came to see and celebrate in the fifth inning.

“That’s the good thing about it,” Alo said this week of the attention and what it means for the sport. “It’s growing, and people are watching.”

Although Texas now finds itself in the unenviable position of simultaneously hoping Alo’s collegiate career lasts as long as possible and never to see her again, the end is nigh. She’ll take her last swing in an Oklahoma uniform Thursday or Friday. By dint of her own talent and hard work, she is arguably the greatest hitter in college softball history. You know the numbers by now. The abundant home runs and scarce strikeouts. The gaudy batting average and slugging percentage that leaves in ruins notions about a game of failure.

By dint of timing, which is often half the story of history, that makes what comes next the most interesting story in softball. Alo may yet be the player who shows softball it no longer needs the Olympics. As the world changes, she is the first post-Olympic star.

“I don’t know that we’re going to see another hitter like Jocy any time soon,” Gasso said this week. “I’m just trying to revel in all of it … because I think we’re seeing another level of excellence and power and preparation. And the things that she does behind the scenes a lot of people don’t know about. She loves this sport. She’s a student of it. She studies it. She loves to play it. She loves to talk about it out loud. She likes to say what she’s going to do out loud, and 99.9 percent of the time she answers her own call.

“She’s special. I like to use the phrase, she’s made differently, and quite in her own mold.”

There is a very real possibility that the 2028 Olympics in Los Angeles will not include softball (or baseball). Fans, officials and players, including Alo in past statements, have taken it almost on faith that Los Angeles organizers will use the discretion now afforded host countries to add sports of national interest. It’s how softball and baseball ended up in the delayed 2020 Tokyo Olympics after a nine-year hiatus. But recent reports still give no indication that those sports will be included. Surfing, skateboarding and sport climbing, yes. Softball? It faces a fight for space with challengers like cheerleading, flag football, lacrosse and even cricket.

The more organizers throw around words like “holistic” and “fresh excitement,” the grimmer things look for a softball bid tied to baseball, not famed for its young demographic – especially without MLB stars.

That doesn’t mean it’s time to give up the fight for inclusion. It certainly doesn’t mean it’s time to stop spreading the sport to more and more young people around the globe. Either way, while there will be checkpoints along the way, no final decision will be made until 2024. But one week of softball six years from now can’t represent the extent of the sport’s vision.

Alo, who is not on the U.S. roster for the World Games in Birmingham, Alabama, at the end of June but will play for the U.S. in the Canada Cup and Japan All-Star Series later this summer, has said she wants to play in the Olympics. Of course she does. From Lisa Fernandez and Dot Richardson to Jennie Finch and Natasha Watley to Rachel Garcia and Haylie McCleney, playing for Team USA in the Olympics has been the most exclusive softball club for nearly 30 years.

Past generations needed the Olympics. It was an unparalleled megaphone. That stage transformed a previous era’s players into stars with mainstream reach. Far more people knew Jessica Mendoza from Team USA than from reaching the Women’s College World Series with Stanford. These days? It’s not so clear that recognition flows the same direction. Sure, there is no more casual sports audience than the Olympics, but beyond a few core sports, it is also increasingly a patchwork of niche audiences – the people seeking online streams or secondary cable networks to watch Team USA play in last summers Olympics were already softball fans.

College softball drives Olympic softball interest, not the other way around anymore.

College softball has done well on television for quite some time. But add the reach of social media and the growing interest among advertisers and investors to put their money into women’s sports – see Pepsi’s decision to reallocate its Super Bowl halftime budget or the success of the NWSL’s Angel City FC business model – and 2022 is a very different landscape than 1995 or 2009. A landscape in which it’s entirely reasonable to think a young, charismatic, supremely talented athlete in a popular sport, regardless of gender, doesn’t need the Olympics.

Alo can bring her own audience, whether thousands of fans in her home state when she broke the home run record earlier this season or NBA star Trae Young on Monday night.

She just needs to keep playing.

Professional Softball the Next Frontier

Alo was the No 1 overall pick in two professional drafts this spring, three-year-old Athletes Unlimited and the new Women’s Professional Fastpitch. Both entities are vying for control of a market that couldn’t sustain National Pro Fastpitch, which sputtered to an end during the pandemic after operating with some ups and many downs for more than a decade.

It is still difficult to make a living playing softball, at least outside of those few who play professionally in Japan. But the bigger the stars that college softball produces and the more leagues like the WNBA and NWSL entrench women’s professional sports in the societal and business firmament, the greater the opportunity – and demand – for change.

In Athletes Unlimited, with its unique individual point system and strong financial backing, she would join U.S. Olympians like Rachel Garcia and Haylie McCleney, popular former college star Sierra Romero, as well as powerful voices like reigning champion Aleshia Ocasio. AU also has a broadcast deal that puts all of its games on ESPN platforms and most on linear networks. But WPF, the new joint venture of the USSSA Pride and USA Softball led by Alo mentor and friend Lauren Chamberlain, also has big draws, including the Olympic keystone combo of Ali Aguilar and Delaney Spaulding, and bold plans.

“I’m excited to join one of the two,” Alo said this week. “I’m excited to see how good it’s going to get from here because of the college game and how much people want to watch it and stuff like that. I’m excited for players who want to continue to play, that they’ll have the opportunity. And even little girls in the stands will now say, like, ‘Oh, now I can become a professional softball player.’”

None of this is what motivated Alo and her family to sacrifice so much so that she could follow her dreams from her home state of Hawaii to, first, California to play high-level club softball and, eventually, Oklahoma to play for the biggest show in college softball. She practiced her swing, honed her eye and learned to generate prodigious power. She didn’t practice strangers recognizing her on the street or having a platform to speak out on issues that matter to her.

In a changing world, those things just come with the success. It’s a new world.

Alo was born after softball made its Olympic debut in 1996. She was in elementary school when it was booted from the regular Olympic program after 2008.The Olympic era played a huge role in creating the softball world she inhabits. But it’s not her era. It’s history.

Softball’s future can’t be a tournament that only happens, at best, once every four years. The future is players who audiences don’t want to wait nearly that long to see do their thing.

Let a home run hitter from Hawaii lead that generation.

“I think [it’s] just taking it for what it is and just running with it,” Alo said of her profile. “You never know when people aren’t going to remember your name, and records are meant to be broken. Trophies get dust on them. I’m just going to embrace this for however long it happens and just try to get my message out there that anything can happen.”