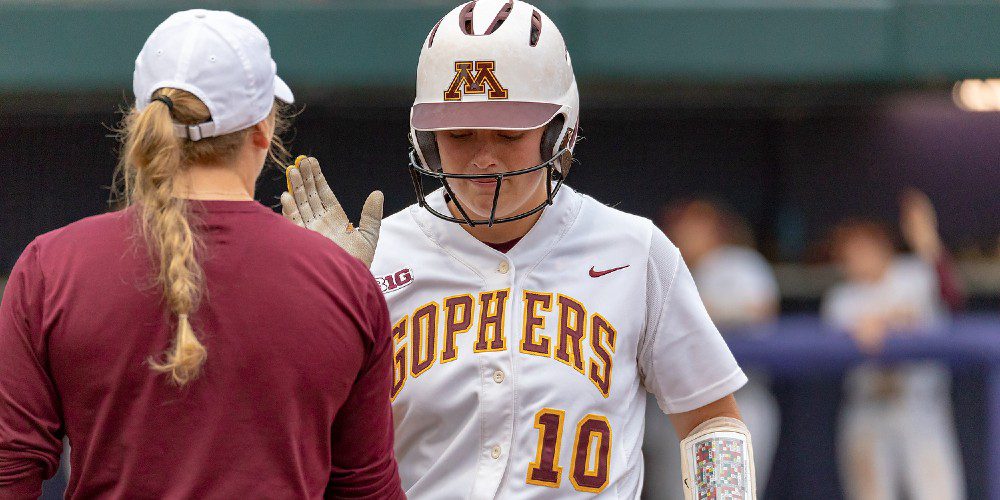 The University of Minnesota bus pulled up to Katie Kemmetmueller’s off-campus housing on the way to the airport. Kemmetmueller raced out of the front door with her bag packed and climbed up the stairs still wearing scrubs.

She had just finished clinical rotations at the hospital and didn’t have time to change. After greeting her teammates and coaches, Kemmetmueller headed straight to the bathroom at the back of the bus to switch into travel clothes for the road trip.

The ambitious third baseman spent her first four years at Minnesota balancing softball and her pursuit of a nursing degree.

Known endearingly as “Nurse Katie” within the Gophers program, Kemmetmueller could have moved on from softball this year and become immersed in her nursing career.

But the graduate senior wanted to return to play for the Gophers once the NCAA offered an extra year of eligibility because the 2020 season was cut short from the coronavirus.

“I think part of me felt a little guilty about not starting my nursing career because of the pandemic. But ultimately I knew I would work my entire life as a nurse, but I didn’t get to compete anymore in softball if I didn’t take this opportunity,” said Kemmetmueller, who is batting .348 with four home runs and nine RBIs in 16 starts this season. “I still love softball and the way it ended last season kind of stunk. I am just grateful I had the chance to come back and play another season.”

Kemmetmueller was the first softball player at Minnesota to go through the school’s nursing program, which allows freshmen to enroll to finish their degrees in four years.

Her experience wasn’t for the faint of heart.

The Minnesota native had to miss practices and try to make up the work in individual sessions with coaches. She would often arrive early at the facility and stay late whenever her schedule allowed.

“That is the crazy thing about Katie. You knew she was a little stressed because she didn’t have a lot of sleep. But she never took it out on anyone and never let it interfere with softball,” Ritter said. “I am sure the days were hard to focus on hitting and things like that. But she loves the game so much she never showed it. Katie is probably the hardest-working student-athlete I’ve ever had.”

Once last season was canceled, Kemmetmueller headed home to lend her father a hand. She missed getting up at 5 a.m. to milk the cows or grinding feed and cleaning the barns.

Part of the reason Kemmetmueller chose to attend Minnesota was so she could return home during breaks or on fall weekends to help around the farm.

Kemmetmueller has been able to bring some of her teammates to the farm for visits throughout her college career.

“It’s nice for them to get to see the way I grew up and why I am the way I am,” Kemmetmueller said. “My family loves hosting them. My mom makes them dinner and my dad likes showing them around the farm and getting to know them better.”

During the recruiting process, Kemmetmueller was cautioned by other programs about attempting such an ambitious academic course load while being a Division I athlete.

But she dismissed their concerns because she’s never been one to shy away from a challenge.

“I like being busy. It’s nice in a sense to always have something to do,” she said. “A lot of my teammates would sleep on and enjoy the flight to away games, but I remember staying up when we were traveling home and studying. I was one of the only kids with the overhead light on. Everybody sitting next to me would would ask, ‘Why is your light on?’’

“I have always enjoyed working with people, and I love to talk to people and help people,” she said. “I have always seen myself as kind of a caregiver, whether it was my younger siblings or teammates I have taken under my wing.”

Kemmetmueller’s teammates have taken advantage of her nursing status. They’ve been known to send text messages at night asking for a diagnosis.

“They definitely will come to me with random stuff,” she said. “They get so many cuts and will send me pictures asking if they need stitches. I am like, ‘No. That’s a paper cut.’”

When it comes to Kemmetmueller’s own health care, Ritter needs to pull the coaching card at times.

“If she gets hit by a ball and she’s supposed to be icing or heating, she definitely lets us know she is treating herself right,” Ritter said. “Sometimes we have mandatory ice baths and she tells me she knows when her body needs an ice bath. But I tell her I am still going to make you do it with the team.”

Given her academic obligations aren’t as stressful this year, the Gophers “have been able to see a whole new Katie,” Ritter said.

But even a lighter load for Kemmetmueller would be overload for most. Along with softball, she’s getting a certificate at Minnesota in human resource development and has been working part-time at a group home for mentally disabled adults and teenagers that have medical needs

“It’s good to have some experience so when I am done with my time as an athlete I have a little bit of something to build my resume,” Kemmetmueller said. “I have to be very careful with Covid, but I have really enjoyed it.”

Kemmetmueller is grateful the Minnesota coaching staff gave her the flexibility to balance all her academic and athletic ambitions. She’s become a role model to her teammates, and shown them it’s possible to pursue all of their dreams in college if they put in the work.

“I think that is what I am most proud of,” Ritter said. “She got to do what she wanted to do in school and get to play the game she loves.”

ACC Notebook: On the Brink of a Title, Gilstrap Savors Clemson’s Run